China Turns to Russia in Search to Replace U.S. Soybeans

In the search to replace U.S. soybeans, China is turning to Russia.

Russia plans to increase production of soybeans in the Far East for deliveries to China, Prime Minister Dmitry Medvedev told reporters in Beijing. The two countries are also planning to work more closely on other agriculture products, including rice, pork, poultry, fish, and to develop logistics.

While Russia is a tiny supplier of soybeans, the move shows one of the effects of the U.S. trade war is closer Chinese and Russian ties. China has also been looking to diversify its sources of food as part of a broader Belt and Road initiative that’s backed by hundreds of billions of dollars for infrastructure projects.

“We can expect an increase in exports from Russia to China, but it will not skyrocket,” said Laurent Crastre, an oilseed analyst with French agriculture consultancy Strategie Grains. “It will be one more option they will have to source soybeans.” 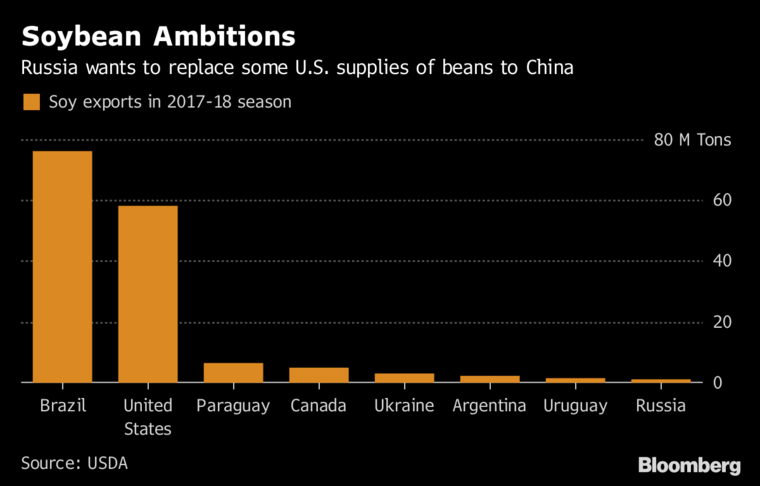 “Soybeans are in very big demand in China,” Medvedev told reporters in Beijing, according to a transcript on the cabinet website.

As the U.S. and China are waging a trade war, “a certain part of the soy market has been made available. We agreed with the Chinese partners to hold a more active presence in this particular segment,” he said.

Russia’s soybean production has been expanding for the past decade. Farmers are expected to reap a record 3.9 million tons in the 2018-19 season, with exports of 700,000 tons, the U.S. Department of Agriculture forecasts. Still, that’s dwarfed by shipments from the world’s top shippers. Brazil is expected to sell 75 million tons abroad this season.

Because of the trade war, China reduced soybean shipments from the U.S. by more than 80 percent in September from a year earlier. The country is the world’s biggest soybean importer and has largely filled the gap by boosting purchases from Brazil.