Chinese and American negotiators are set to start meeting again in Washington on Thursday in the latest round of their so-far fruitless talks to strike a trade deal. If no agreement is reached, the already slowing global economy will face another hurdle, with the U.S. set to raise tariffs on China on Oct. 15 and then on the European Union on Oct. 18.

Both China and the U.S. have scheduled further tariff increases for December, and Europe is considering retaliation against any U.S. action. With close to $2 trillion in global trade flows at risk from greater protectionism, according to a Bloomberg analysis, those protectionist actions would depress trade, make businesses more cautious and further damage global demand.

Investors are underlining what’s at stake: U.S. stock futures slid after a report in the South China Morning Post suggested Chinese negotiators led by Liu He could cut short their stay — a report refuted by the White House.

“We are not aware of a change in the Vice Premier’s travel plans at this time,” White House spokesman Judd Deere said late on Wednesday in Washington, referring to Liu.

Chinese state-media had said Wednesday night that the schedule was still on track. 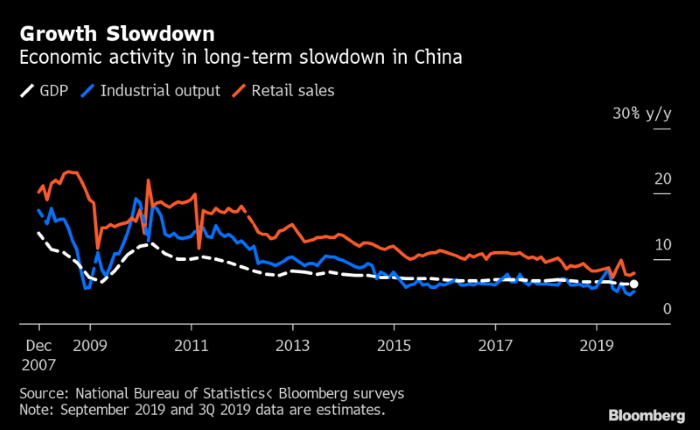 China’s economy would be slowing with or without the trade war. But that conflict, which over the last 18 months has broadened to other contentious areas such as technology, state subsidies, human rights, Taiwan and the Hong Kong protests, is also damaging to the economy, as it cuts demand for Chinese exports, damages business confidence and undermines investment.

The tit-for-tat tariffs have driven down commerce, with Chinese exports down 9% in the first eight months of this year, and imports from the U.S. falling almost 28% for the same period. China’s total exports over the same timeframe have been basically unchanged, meaning it’s been able to find other countries to sell to, but its imports dropped 5%, with that fall in demand weighing on other nation’s economies.

The China-U.S. dispute is just one of the risks facing the global economy, with Brexit and the ongoing dispute between the U.S. and Europe over cars and industrial subsidies also posing a threat to trade flows. The U.S. will put tariffs on as much as $7.5 billion of Scotch whisky, French wine, cheese, planes and other European exports from next week. EU officials hope that won’t happen, but have also drafted retaliatory measures just in case.

That threat and the possibility of a no-deal Brexit are some of the factors dragging down European growth, with a sharp slowdown in German services suggesting the pain from its industrial crisis is spreading, and manufacturing contracting across the Eurozone. That German outlook went from bad to worse in September, an unpleasant surprise that marks the latest dismal reading on Bloomberg’s Trade Tracker.

The global economic slowdown and trade policy are working against the world’s largest economy as well. Manufacturing has slipped into a recession, with factory output declining in the first two quarters of the year, and data last week indicate a further softening as companies tighten up capital spending budgets. At the same time, U.S. economic growth is above trend thanks to steady household spending and the lowest jobless rate in five decades.

Meanwhile, supply-chain complications have emerged from the trade war, prompting companies to adapt and avoid tariffs. In the year through August, U.S. imports from China have declined 12.5%, or more than $43 billion, while purchases from Mexico — the second-biggest supplier of goods to America — posted the largest increase.
Source: Bloomberg