China is trying to force a Powell put. 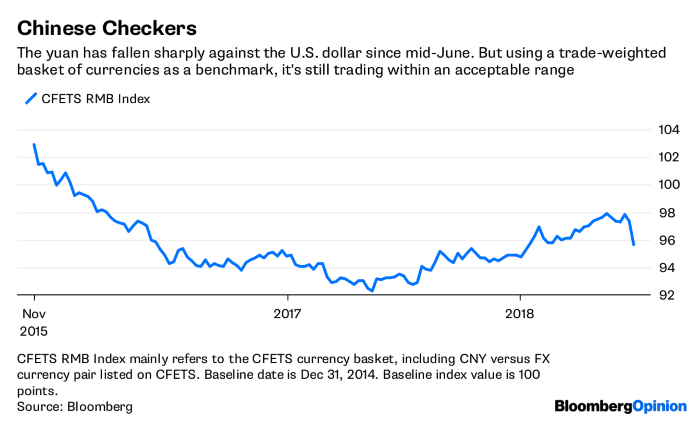 Currency devaluation may well be an effective weapon in the escalating global trade war. But Beijing, highly exposed to increases in U.S. borrowing costs, also wants the Federal Reserve to slow its pace of rate hikes.

Take a look at the corporate bond market. U.S. high-yield notes have outperformed Treasuries and investment-grade debentures this year. In other words, China’s $1.2 trillion of U.S. government debt holdings is hardly a haven. 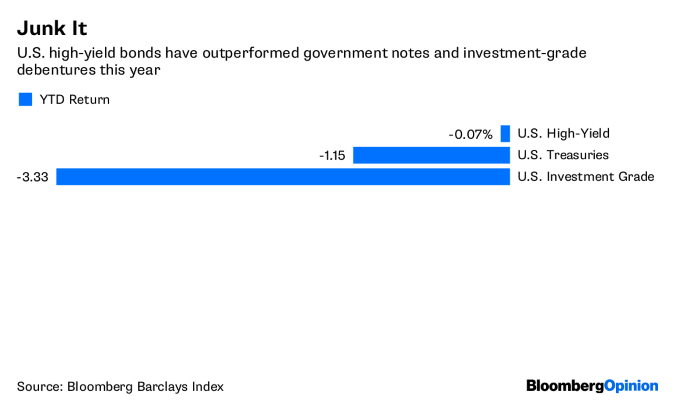 This is because interest-rate risk, rather than credit risk, is foremost in investors’ minds. Never mind that holders of corporate debt aren’t as well protected, President Donald Trump’s tax cuts are supercharging an economy that’s already running near full capacity, buffering the nation against a tariff-induced slowdown. As a result, American companies are nowhere close to defaulting on their obligations.

Fed chairmen have succumbed before.

As my colleague Andy Mukherjee noted, within hours of Beijing’s shock 2 percent currency devaluation in August 2015, the odds that the Fed would raise interest rates in September dropped like a stone. At the central bank’s meeting that month, then chair Janet Yellen cited turmoil in “recent global economic and financial developments” as a key reason to delay any hikes. 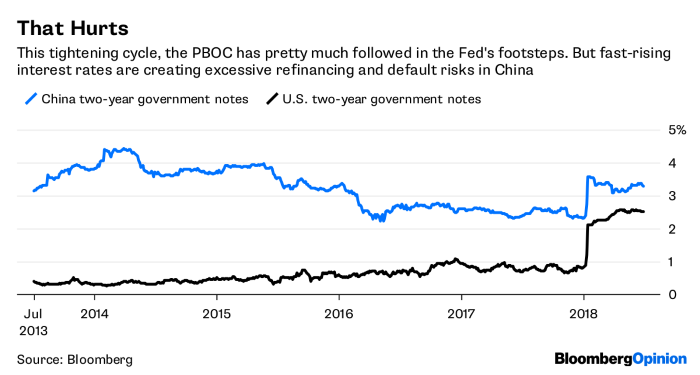 If Beijing thought a dovish Fed could help then, it sure needs Jerome Powell to be in the slow lane now. Trump’s trade tirade is messing up President Xi Jinping’s economic plans.

Until recently, the People’s Bank of China has followed in the footsteps of the Fed. But unlike in the U.S., credit risk is on every investor’s mind as authorities prioritize deleveraging over growth. If interest rates rise too fast, even healthy companies could default. The June 24 reserve ratio cut by China’s central bank, brought about by a local share market rout, could be seen as a signal to Powell.

Xi’s Belt and Road initiative has had to hit the brakes too. PBOC Governor Yi Gang is now openly questioning the debt sustainability of countries in China’s ambitious project – emerging economies are bleeding as two-year Treasury yields soar to 2.53 percent from 1.26 percent in September.

Pakistan, a major Belt and Road beneficiary, has already devalued its currency three times since last December while external debt has rocketed to more than $90 billion against just $10 billion of foreign-exchange reserves. Beijing recently had to lend $1 billion to Islamabad to avoid another IMF bailout. China doesn’t want to be investing billions of dollars in failed states.

Traders in the U.S. have so far brushed aside the yuan’s weakness, leaving the odds of a rate hike this fall unchanged. But that’s because the yuan, as measured against China’s trade-weighted basket, is still trading within an acceptable range. Should the CFETS RMB Index approach 93, the picture would change quickly.

Will Powell blink? China has already tolerated an almost 20 percent drop in domestic equities. Don’t be surprised at how far Beijing is willing to go.
Source: Bloomberg