In the maritime world conversations among professionals soon turn to China, reflecting the country’s pervasive influence. After rapid enlargement during the past two decades, this presence is at the forefront of both the demand and supply sides of many global maritime market sectors. And looking ahead, signs of a changing emphasis are becoming more visible.

Aspects of China’s role are discussed in the Review of Maritime Transport 2019 (RMT), published at the end of October by the United Nations Conference on Trade and Development. Activities reviewed in this annual report include China’s seaborne trade, Chinese ports, the China-owned fleet, and shipbuilding in China. One aspect highlighted is the overdependence of global sea trade on import demand in China.

The RMT draws attention to the large proportion of global seaborne trade growth which is attributable to expansion of China’s imports. Over the past ten years, from 2008 to 2018, imports of all types of cargo into China grew by over 1500 million tonnes, equivalent to nearly half (49 percent) of the increase in the entire world’s imports. As a result of the trend, in 2018 more than a fifth of world seaborne trade was comprised of China’s imports.

These figures largely explain why the outlook for future trade is perceived to be heavily dependent on progress in China’s economy, and in the industries and agricultural activities which are reflected in seaborne cargo movements. Currently, the economy is on a slowing trend. Government policy envisages a transition to a more sustainable economic growth pattern, which shifts the emphasis away from capital investment and manufacturing towards consumer spending and services. It is a change potentially restraining China’s seaborne trade flows, with substantial consequences for global shipping markets.

Justifications for expecting changes in China’s trade trends are not discussed in detail in the RMT. However, some of the reasons for expecting a modified pace are quite conspicuous. As the economy matures, part of the impetus behind commodity imports into China probably will fade. More specifically, reduced emphasis on further expansion of industries which have been, during the past decade or more, growing at an exceptionally rapid rate is likely to have implications for import demand. Changes in the balance between domestic commodity production and foreign supplies, and in manufacturing processes, also could have restraining effects on imports.

One potentially positive influence, not yet quantifiable with any precision, is the impact of the Belt & Road Initiative. Infrastructure building and industrial development connected with this extensive project could result in additional flows of commodities and manufactured goods, providing a boost for seaborne trade. However, as the RMT comments, it is unclear whether extra volumes of cargo arising would offset adverse influences affecting China’s imports.

Recent changes in annual volumes of China’s trade inflows and outflows are shown. According to UNCTAD calculations, growth in the volume of merchandise imports decelerated to 6.4 percent in 2018, after accelerating to 8.9 percent in the previous year. Merchandise exports volume growth slackened to 4.1 percent last year, after surging to 7.1 percent in the preceding twelve months.

Alternative calculations for these years, published by Clarksons Research, show changes in China’s specifically seaborne trade volumes. Based on this source, imports of all seaborne cargoes totalled 2521 mt in 2018, a 3.4 percent increase, after growing by 8.1 percent in the previous year. Exports of all seaborne cargoes were almost flat in 2018 at 586mt, after a marginal 1 percent decrease in the previous year. 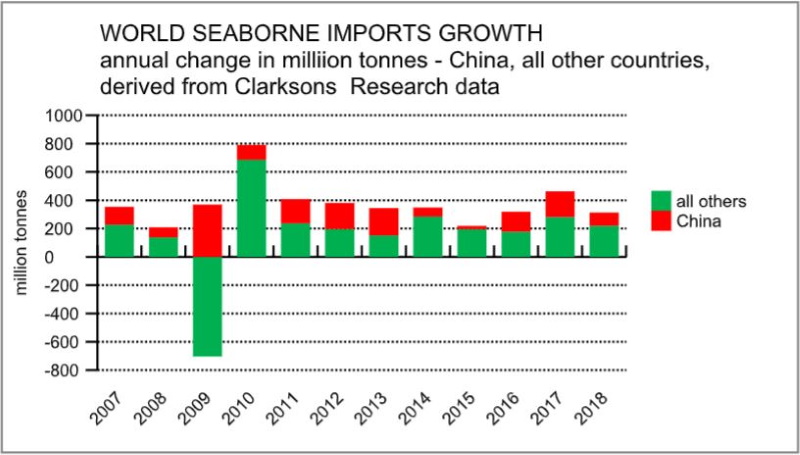 As a key player in container trade movements, China’s diminishing role in Asia’s low-cost manufacturing is a feature. The RMT points out that “China has become more self reliant and increasingly requires less imported inputs for production. This shift is altering the demand for intermediate goods and weighing on intra-Asian containerized trade flows”.

International trade tensions, especially between China and the United States, are also a topic. Tariffs introduced have affected up to two percent of global seaborne trade, with exposure varying among cargo types and market segments. Geographical trade patterns have changed as a consequence. Another observation, from the OECD organisation in its November 2019 report on the world economy, emphasises that escalating conflict over tariffs has weakened world trade and business investment, contributing to a continuing global economic growth slowdown.

An entire chapter in the RMT 2019 edition is devoted to performance indicators for the maritime transport sector. Port performance and connectivity is a focus, with coverage of China among nine hundred ports in countries around the world. UNCTAD’s new port liner shipping connectivity index was created recently, to show the position of a port or country in the global container shipping network. The index is designed as an indicator of accessibility to global trade. There are also new statistics on port calls and vessel turnaround time spent in port.

China is revealed as the most connected country, and has improved its liner shipping connectivity index by 51 percent since 2006, more than double the 24 percent improvement for the world average in this period. Shanghai is described as now the most connected port in the world, after overtaking Hong Kong, and Shanghai and Ningbo have strengthened their lead. Container port traffic through mainland China’s ports comprised 28.5 percent of the world total in 2018. Most of this traffic consists of Chinese exports, augmented by imports and coastal movements.

Shipowners based in China have doubled their share of the world merchant ship fleet since the early years of this century. In the early 2000s China-owned ships comprised 5-6 percent of the total deadweight tonnes capacity of the global fleet of all types of commercial vessel. At the beginning of 2019 the proportion was 10.5 percent, according to figures contained in the RMT, about one percentage point higher than seen at the same point in the previous two years.

During 2017 and 2018 the China-owned fleet grew rapidly, resulting in a 1 January 2019 total of 206.3m dwt, comprised of 6125 ships. The total places China still in third place among the world’s largest shipowning countries by nationality and location of owner, after Greece in top position (17.8 percent of world capacity) and Japan in second place (11.5 percent).

Over the five years since the beginning of 2014, when the China-owned fleet totalled 158.7m dwt, cumulative capacity added was 47.6m dwt or 30 percent, according to UNCTAD statistics. The past two years saw especially strong annual growth rates, 10.7 percent in 2017 and 12.7 percent in 2018. This progress corroborates evidence of a government policy priority to increase the proportion of nationally-controlled sea transport in prominent market segments.

Statistics also show registration breakdowns for fleets. At the beginning of this year over half, 56 percent, of the China-owned fleet was registered under foreign flags, with the remainder registered under the national flag. These proportions have not changed greatly in recent years. By contrast owners in the other two largest shipowning countries register a much larger part of their respective fleets under foreign flags, currently 83-84 percent.

The latest RMT has a greater emphasis on environmental sustainability in the maritime sphere, reflecting the evolution of this aspect as a major policy concern, with associated regulations increasingly affecting market dynamics. The report introduces environmental indicators for the world fleet as a whole, and for individual countries including China. It comments that the shipping industry is currently in a transformational phase, including environmental development.

Three features are identified as indicators relevant to assessing the environmental impact of vessels: ballast water treatment systems, exhaust gas cleaning systems (scrubbers) and compliance with tier III regulations to reduce nitrogen oxide emissions. Percentages of the number of ships in the China-owned fleet which had these features, at the beginning of this year, were 8.05, 0.43 and 0.13 percent respectively. For comparison in the Japan-owned fleet the figures were 13.13, 0.14 and 0.16 percent respectively.

Among the three largest shipbuilding countries, China is well-established, together with South Korea and Japan. In 2018, as reported in the RMT, China contributed 40 percent of world newbuilding deliveries, measured by gross tonnes. The China total was 23.3 million gt, compared with 14.6m gt in Korea and 14.4m gt in Japan. These three countries comprised nine-tenths of the global newbuildings volume.

Figures compiled separately by Clarksons Research show the full extent of the world orderbook for merchant ships. When 2019 began, China had the biggest shipbuilding orderbook for new vessels, scheduled to be delivered on completion mostly during 2019 and the following two years. Orders placed at Chinese yards by shipowners in China and other owners around the world totalled 56.9m gt, a 39 percent share of the world total. The next largest element was South Korea with 30 percent.

Shipbuilding activity in China and elsewhere has been adversely affected in recent years by over-capacity and subdued ordering. As UNCTAD analysts observe, the worldwide industry has been “undergoing reforms to ensure competitiveness…, mitigate the impact on a labour-intensive sector and develop a modern vessel-construction model fit for the future”. One theme has been consolidation of shipbuilders. In China a merger between the two main shipbuilding companies, China State Shipbuilding Corporation (CSSC) and China Shipbuilding Industry Corporation (CSIC) has been approved.

Analysis of these prominent aspects of China’s maritime role benefits greatly from the valuable insights and commentary contained in the Review of Maritime Transport 2019. Important clues are provided about how future trends in China and other countries may evolve, although forecasting is not the principal feature.

One firm forecast which is included in the RMT, although not focusing on China specifically, is worth examining. UNCTAD analysts expect global seaborne trade to grow at an average annual rate of 3.4 percent in the five years from 2019 to 2024, a notably upbeat outlook. It is suggested that growth will be driven by rising trade volumes in the container, dry bulk and gas cargoes sectors. However, it is acknowledged that “uncertainty remains an overriding theme…with risks tilted to the downside”.

When historical growth patterns are examined, it is evident that this 3.4 percent average world seaborne trade growth forecast, for the next five years, replicates the preceding performance. It compares with a similar 3.4 percent average growth rate seen in the past eight years, from 2011 to 2018. In that period actual annual growth rates were in a 2.2 – 4.2 percent range.

Arguably, the future trend in several major parts of world seaborne trade – coal, iron ore and crude oil – comprising two-fifths of the total volume could be broadly flat, or even negative. This alternative prospect suggests that average overall growth predictions exceeding 3 percent annually are too optimistic. A significantly lower average 2 percent increase may be more likely.

Within this view of global trade prospects, perceptions about China’s future performance are central. Expanding imports into China have been a large part of growth in global seaborne trade during the past decade or longer. If China’s import expansion rate slackens over the next five years as seems probable then – especially in the absence of a compensating surge in import demand elsewhere – the impact will be widely felt in many activities in the maritime world.
Source: Article by Richard Scott, managing director, Bulk Shipping Analysis and visiting lecturer, London universities, for Hellenic Shipping News Worldwide (www.hellenicshippingnews.com)

Previous: LNG shipping heats up but market is increasingly subject to short term effects
Next: Tanker Newbuildings Low in 2019, but Still More than 2018