China’s bulks: the sentiment gap between steel and coal widens

China seems to be containing its local coronavirus situation, with imported cases now posing the greater threat. While quarantine measures remain tight in cities such as Beijing and Shanghai – China’s busiest points of entry – economic activity is resuming in lower-risk regions.

Market sentiment for steel is optimistic, with production picking up and inventory finally running down. However, the coal market remains gloomy with weak market fundamentals, bringing both thermal and metallurgical coal prices down.

Coal supply: import disruptions continue
Domestic coal supply has already returned to normal, but disruptions remain on the import side. Mongolian coal supply took another twist when border crossings didn’t reopen as scheduled on 16 March – precautionary measures were not well prepared amid confirmation of further coronavirus cases in Mongolia. The reopening of border crossings is now rescheduled for 1 April.

Thermal coal: weak demand adds to an unfavourable outlook
The Qinhuangdao 5,500 price has slid further in the past week, due to weak demand. Daily coal consumption by the six largest gencos in the coastal region remains at 80% of last year’s level. In addition, heating supply in many provinces has ended. The National Bureau of Statistics issued its macroeconomic indicators for the first two months of the year: the slump in figures and the global spread of coronavirus suggest an unfavourable outlook for the coal market.

With no change in the fundamentals, we expect the Qinhuangdao price to keep falling this week. 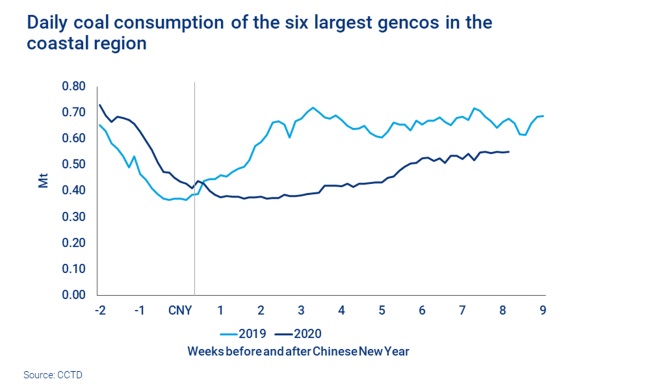 Metallurgical coal: price pressure won’t ease quickly
While finished steel stockpiles have started to fall, they remain at high levels. As such, coke prices were cut for a fourth time by RMB50/t, despite resistance from coke makers. Some coking plants in northwest China have reported losses after prices have quickly declined by RMB200/t in recent weeks.

Stagnant coke demand has enhanced the fall in coking coal prices in Shanxi, with Liulin #4 dropping RMB70/t in the week and Anze low-sulphur premium HCC falling by RMB110/t.

We expect downstream industries to continue to recover in the coming weeks, helping steel demand to pick up. However, the pressure on coking coal prices is unlikely to be relieved quickly, as the destocking of steel will take some time. As such, prices will remain weak for a short while. 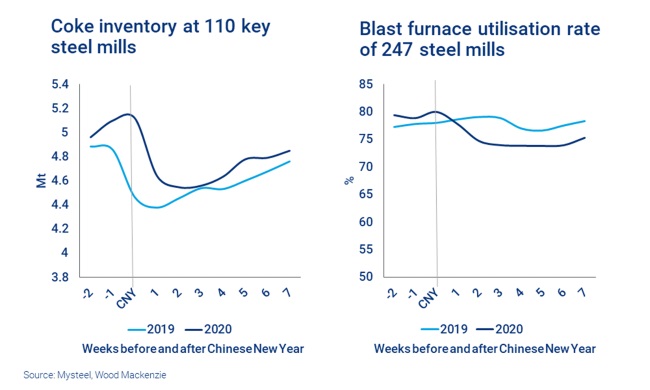 Steel and iron ore: as downstream operations resumed, inventory started to fall
Just as the market expected, finished steel inventory started to fall as more stable downstream operations resumed. Steel production is also picking up, as more electric arc furnace steelmakers resume operations on improved margin conditions. Rebar spot and futures are particularly firm among other commodities that have been freefalling amid the global financial shock.

Market sentiment shows strong confidence in China’s property sector and the government’s efforts to leverage the economy through infrastructure. Most Chinese-made rebar is consumed domestically. However, oversupply remains a risk – apart from the high finished steel inventory, we shouldn’t forget semi-finished, which isn’t included in the inventory statistics. Official data shows production of crude steel grew 3.1% year-on-year in January and February, but finished steel production dropped 3.4%. 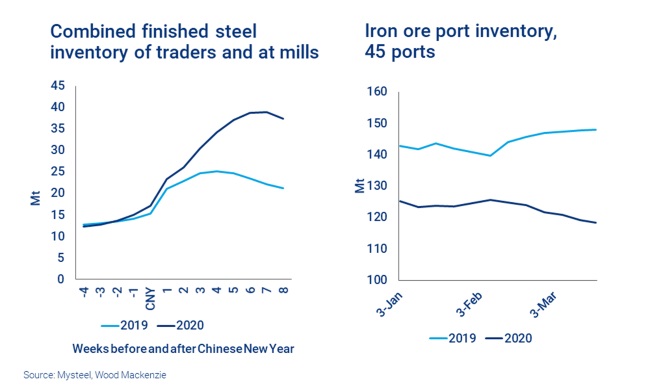