China’s Consumers Haven’t Been This Confident in Two Decades

With things looking up across China’s economic dashboard, sentiment among consumers and households is the strongest in more than two decades.

The consumer confidence index climbed to 114.6 in July. That’s up from last May, when it dipped below 100, the line separating optimism and pessimism. 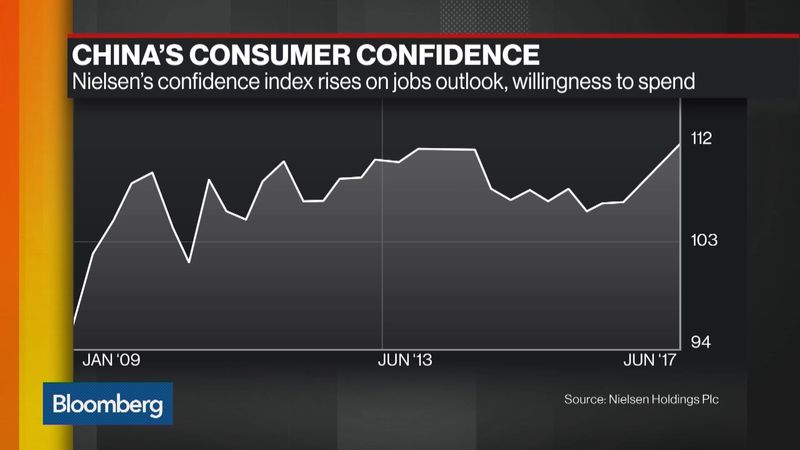 The strength of the world’s second-largest economy has surprised forecasters, with GDP growth accelerating to 6.9% in the first 2 quarters this year. Per capita disposable income rose 7.3 percent on year in the first half, statistics bureau data show. The yuan has been on a tear, posting the best performance in Asia over the past three months. 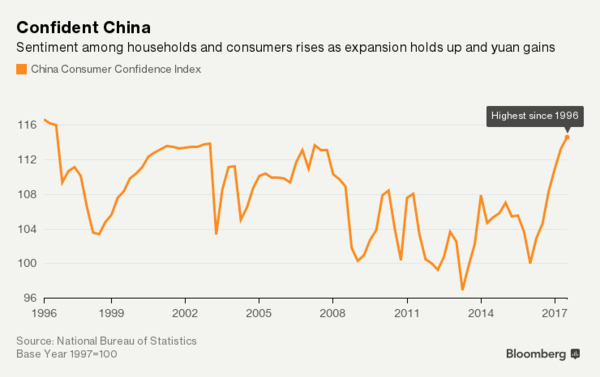 Meanwhile, a private consumer confidence index, compiled by Nielsen Holdings Plc, climbed to 112 in the second quarter, the best reading since at least 2009. A component tracking willingness to spend also climbed to a fresh high, while readings for job prospects and personal finances also increased.

The strength comes in part from local economic policies aimed at boosting less-developed regions as well as other reforms, and it suggests the overall economy will continue performing well, according to Vishal Bali, a managing director of Nielsen China in Shanghai. Consumers in larger cities tend to spend more on better food and beverages, while those in smaller ones are willing to spend more on better daily necessities, Nielsen’s survey found.

“Chinese consumers are becoming more willing to spend,” Bali said in a statement released along with the latest data. As “fast-pace economic growth offers more job opportunities to local residents, the development of China’s rural areas and lower-tier cities will become a new driver for the country’s future economic growth.”
Source: Bloomberg