China has emerged as a major “player” in the crude oil import market. In a recent weekly report, shipbroker Banchero Costa said that “China’s crude oil imports exceeded all expectations so far in 2020, as the country tried to take advantage of very low oil prices. In the first 9 months of 2020, China imported 370.7 mln tonnes of crude oil by sea, according to vessel tracking data from Refinitiv. This represents a net increase of +14.2% y-o-y compared to the 324.6 mln tonnes imported in the same period of 2019, and is also +26.2% higher than the 293.8 mln tonnes imported in Jan-Sep 2018. The first few months of the year were certainly not promising, as China was the first country in the world to be hit by the pandemic. 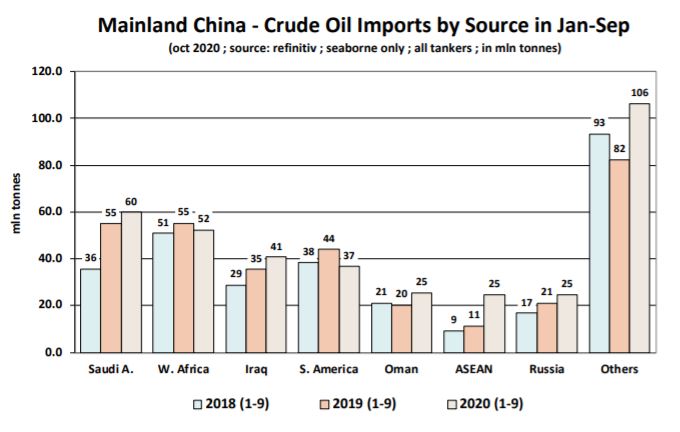 According to Banchero Costa, “in the first quarter of 2020, China imported 113.4 mln tonnes of seaborne crude oil, which was still a modest +3% increase on the same period last year. At the time, most people thought that things could only go downhill, what with all the lockdowns and terrible forecastsfor the economy. However, the second quarter of 2020 proved to be if anything much more positive. In the period April-June 2020, seaborne crude oil imports to China surged by +17.6% year-onyear to 125.4 mln tonnes, despite a rather disappointing month of April (35.3 mln tonnes, -4.9% y-o-y)”. 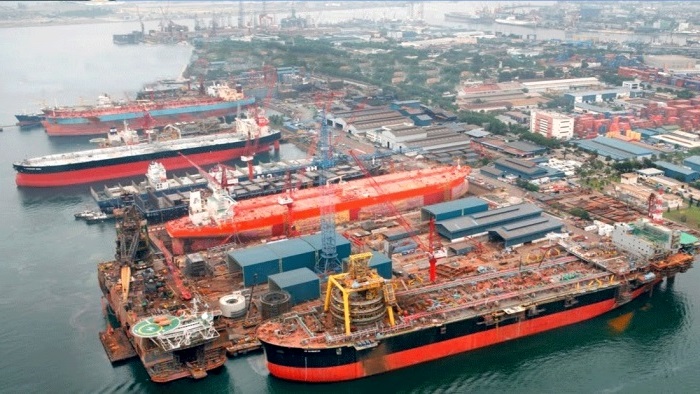 The shipbroker added that “things were even better (and arguably peaked) in the third quarter. In the July-September period, China imported 132.0 mln tonnes of crude oil, which was a strong +22.3% more than in the same quarter last year. The peak month was actually June, with 45.8 mln tonnes of crude oil in just one month, up +31.9% y-o-y. Since then we have seen a slow but steady cooling in the volumes, which were down to 41.5 mln tonnes in September (still a more than respectable +20.7% y-o-y). At this point, with storage levels so high, we would not be surprised if this negative trend continued into the final quarter of the year. Therefore, 2020 might lack the usual fourth quarter surge we got used to in the past”.

According to Banchero Costa, “trading patterns have not changed significantly this year. Just as last year, 47 percent of all crude shipments to China were sourced from the Arabian Gulf. Imports from Saudi Arabia increased by only +9.0% year-onyear in the first three quarters of 2020 to 59.9 mln tonnes. However we need to keep in mind that this follows a record +54.4% y-o-y jump last year. Saudi Arabia by itself accounts for 16% of all crude importsto China this year. Shipments from Iraq to China increased by +15.1% year-on-year in Jan-Sep 2020 to 40.8 mln tonnes. Iraq accounts for 11% of China’s crude import volumes”. 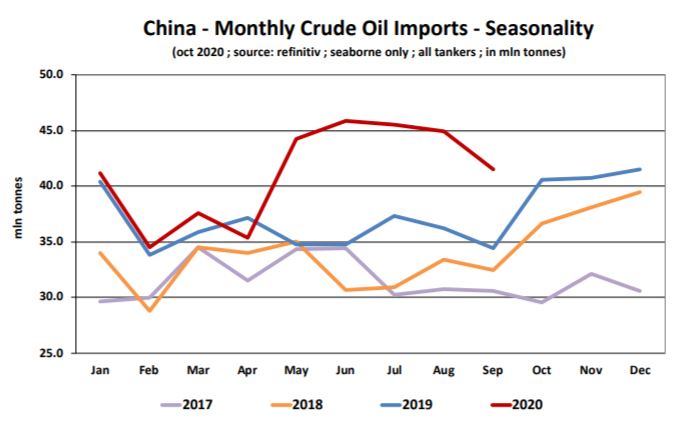 He added that “volumes continued to shrink from Iran, -69.5% y-o-y to just 3.9 mln tonnes, down from 12.7 mln tonnes in Jan-Sep 2019. Imports from Venezuela, at least the official ones, went down all the way to zero, from 10.4 mln tonnes in the same period last year. Volumes from Brazil, on the other hand, jumped by +23.4% y-o-y to 29.9 mln tonnes. Brazil now accounts for 9.6% of China’s seaborne crude imports. Shipments from West Africa to China declined by -5.5% in Jan-Sep 2020 to 52.2 mln tonnes. West Africa accounted for 14% of all crude imports to China this year. Seaborne exports from Russia to China increased by +17.3 year-onyear to 24.7 mln tonnes. Volumes from the USA, surged by +193% y-o-y, but remained fairly modest at 10.2mln tonnes, just 2.7% of China’s total imports”, Banchero Costa concluded.
Nikos Roussanoglou, Hellenic Shipping News Worldwide