Russia started sending gas to China through the Power of Siberia pipeline on Monday, 2 December, as part of a 30-year long contract between the two state-run companies, Gazprom and CNPC.

A limited volume of around 300 million cubic metres (mcm) will be supplied to the northeast regions of China in December.

It will take until 2024 for the full contractual supply of 38 billion cubic metres (bcm) to be reached.

The 3,000km-long Power of Siberia pipeline will supply China’s northeast regions with gas from the Chayandinskoye and Kovyktinskoye fields in Yakutia and the Irkutsk region.

The opening of the Power of Siberia pipeline is set to boost supply diversity in China just as the country’s natural gas demand growth has begun to show signs of slowing.

While flows from Russia will take some time to ramp up to significant levels, the prospect of slowing gas demand growth and increased pipeline supply is likely to pose a threat to China’s ability to import ever-greater volumes of LNG. 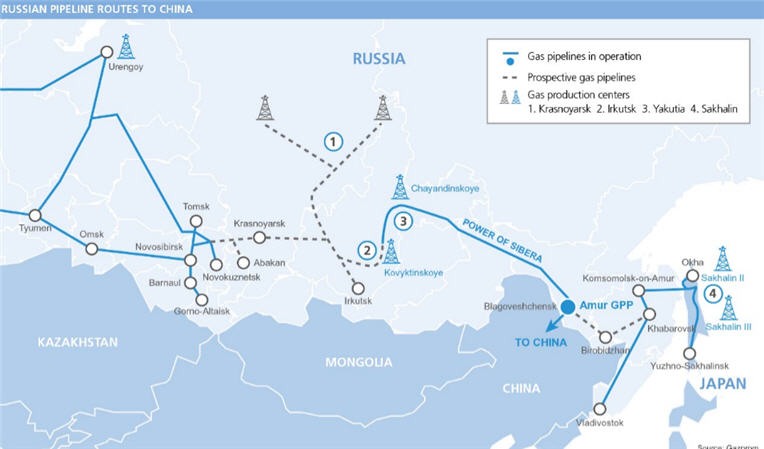 The gas market is finely balanced in China and while Russian gas volumes will be limited over the coming months, they could still influence LNG demand.

Even without the additional pipeline supply via the Power of Siberia, October LNG imports were down by 8.3% year on year to 4.18m tonnes.

Over the first 10 months of 2019 Chinese domestic gas production rose by 10% year on year, reaching 142bcm.

The weaker macroeconomic situation within China, coupled with the deceleration in the roll-out of key environmental policies have hit gas demand growth.

This comes at a time when the global LNG market is heavily oversupplied with spot prices at record lows for the time of year.

Since then, the two companies have also been discussing additional volumes for delivery through the Power of Siberia pipeline, and potential other pipeline volumes from gas reserves at Sakhalin and Yamal.

The rate of production at the Russian Chayandinskoye and Kovyktinskoye fields is expected to reach 50bcm from 2025, meaning there could be substantial additional volumes up for negotiation. 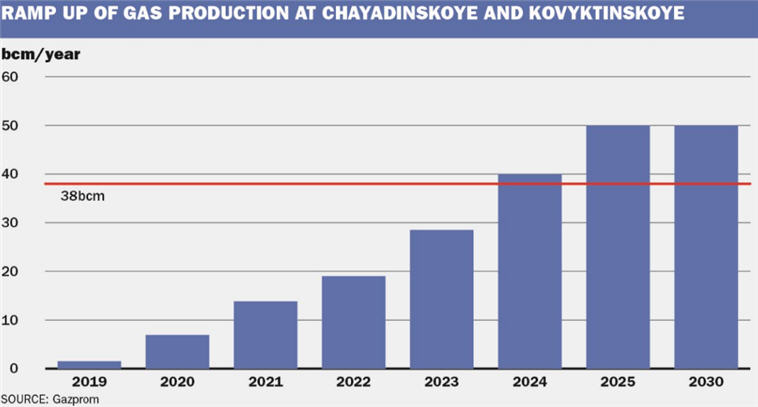 The creation of an independent Chinese oil and gas pipeline company seems to be slowing negotiations because there is uncertainty on who will invest in new infrastructure and how the new company will operate.

Some issues include the reluctance of incumbent players to lose grip of their assets, and setting up tariff mechanisms, transparency platforms, capacity booking and trading systems, according to Gregely Molnar, gas analyst at the International Energy Agency.

“The creation of the pipeline company is a factor in the China-Russia negotiation in that there is considerable uncertainty about cost structures following its creation. But perhaps important is the uncertainty about China’s future gas demand and which source – pipeline or LNG – will be cheaper and more flexible for Chinese buyers and end users,” said Michal Meidan, director of the China Energy Programme at the Oxford Energy Institute.

“Slower demand growth and the focus on domestic production is reducing the call on imported gas while concerns about supply security and import dependence, in light of the US-China trade war, are leading the government to favour pipeline supplies over LNG. The reality remains, however, that China’s future demand will require both pipeline and LNG,” said Meidan.
Source: ICIS, by Diane Pallardy (https://www.icis.com/explore/resources/news/2019/12/04/10450812/china-s-gas-demand-growth-slows-as-russian-pipe-supply-starts)