China’s rising influence in marine fuels, globally worth over $100 billion a year, has been made possible by a surge in its fuel output and thriving trade thanks to being home to the world’s largest manufacturing base and four of the five busiest global container ports.

That has allowed Chinese suppliers of marine fuel, also known as bunkers, to lure business with more competitive prices, chipping away at market share held by competitors such as Hong Kong, Taiwan, South Korea, Japan and Singapore.

“As the market stabilizes, China will start taking more bunkering growth volumes away from places like Singapore or other north Asian ports but this will happen gradually,” said Sri Paravaikkarasu, director for Asia oil at FGE.

In the first four months of 2021, China sold about 6.6 million tonnes of very low-sulphur fuel oil (VLSFO) with a maximum 0.5% sulphur content, which complies with global emission rules set by the International Maritime Organization (IMO), according to the latest customs data.

That’s up 62% from the 4.1 million tonnes sold over the same period last year. 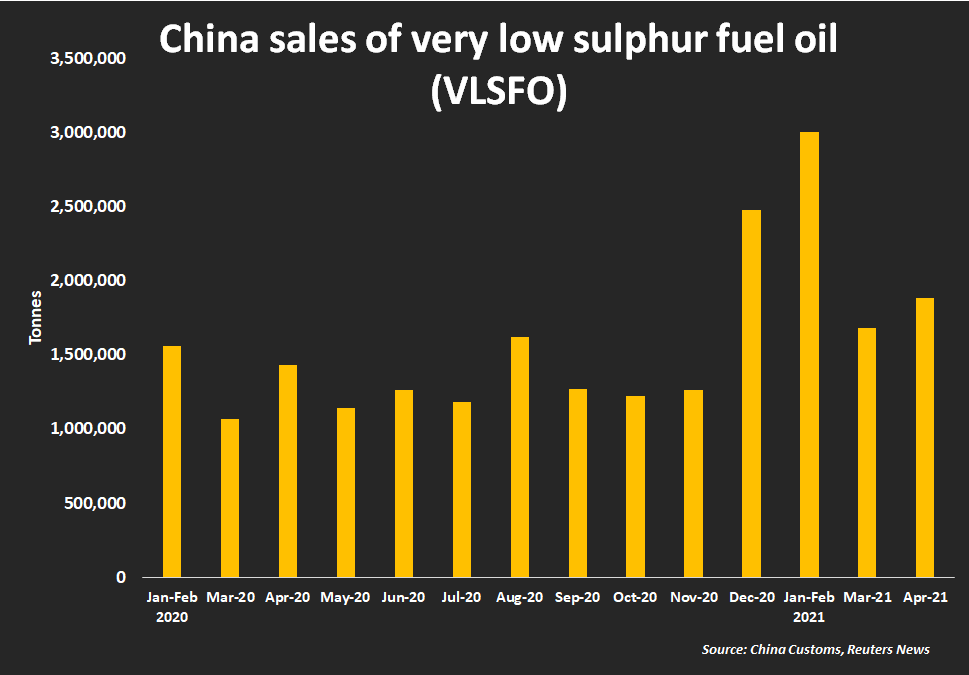 Though that comparison is skewed somewhat by a pandemic-induced slump in activity in early 2020, the shift in refuelling patterns is clear.

For 2020 as a whole, China sold nearly 15.5 million tonnes of bunker fuel, the data showed, compared to about 12 to 14 million tonnes in 2019, according to industry sources.

China also has benefited from a dramatic drop in bunkering volumes over the past year in Hong Kong, which imposed strict 14-day COVID-19 quarantines on vessels calling for bunkers, forcing some ships to refuel elsewhere.

While Hong Kong’s quarantine measures were finally eased on June 15 after nearly 11 months, Frankie Yick, a Hong Kong transport sector legislator, said the city’s bunkering volume had since dropped by 70% – a third of which went to Zhoushan while the rest went to Singapore, Taiwan, Philippines and Japan.

As the world’s top bunkering hub and a major oil trading centre along one of the busiest shipping lanes, Singapore usually offers the lowest bunkering prices in Asia.

But as refiners in China ramp up production, bunkering costs in Zhoushan are becoming the most competitive in Asia. 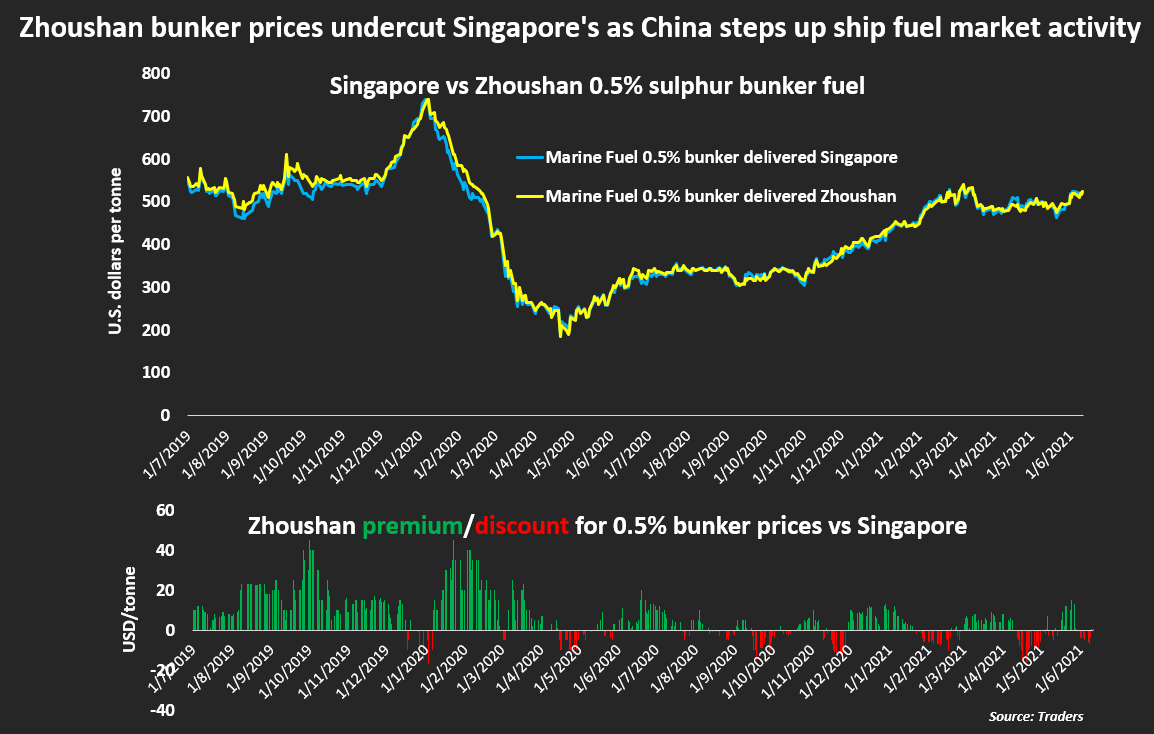 In three of the six months so far this year, delivered VLSFO prices in Zhoushan have averaged below Singapore’s.

In April, delivered Zhoushan VLSFO bunker prices averaged $5.20 per tonne below Singapore’s – the widest discount on record since trade in the IMO-compliant fuel began in mid-2019.

“It’s just price war,” said the senior trader when asked about recent price trends in Zhoushan, adding that price wars were effective over the long term.

Singapore’s marine fuel sales fell to an 11-month low of 4.1 million tonnes in May amid intensifying price competition and lower bunkering traffic, even as global maritime trade continued to rebound.

In the first five months of the year, Singapore’s bunkering volumes were up just 2% from last year, and in 2020 rose 5% to 49.8 million tonnes.

“Overall Asia’s bunkering market is growing at a relatively stronger pace, compared to the rest of the world,” said FGE’s Paravaikkarasu.

“A part of this growth is shared by emerging ports in China, leaving Singapore’s expansion lower than what it could have been otherwise,” she said.
Source: Reuters (Additional reporting by Chen Aizhu in Singapore; Editing by Florence Tan, Gavin Maguire and Kim Coghill)