Iron ore futures in China saw their best day in seven weeks on Wednesday, extending a record-breaking rally amid supply disruption concerns flagged by the world’s major sellers of the steelmaking raw material as well as demand from steel mills.

The most traded May 2019 iron ore contract on the Dalian Commodity Exchange briefly touched limit-up at 694.5 yuan ($103.49) a tonne in late trade before ending at 690.5 yuan, a hefty 5.3 percent rise from Tuesday’s record close.

“I think there’s still room for price to go up, maybe around $5 to $6 (a tonne) more from the current level,” a Shanghai-based trader said, before the Dalian price hit the day’s upper limit. There’s “good” iron ore demand currently from steel mills, he said.

The spot price of iron ore for delivery to China, with 62 percent fines, stood at $90 a tonne on Tuesday, according to SteelHome consultancy.

Barclays said it expects an improvement in supply to drag iron ore prices lower to $70 a tonne in 2020, from its revised forecast of $75 for 2019, up from $69 previously. 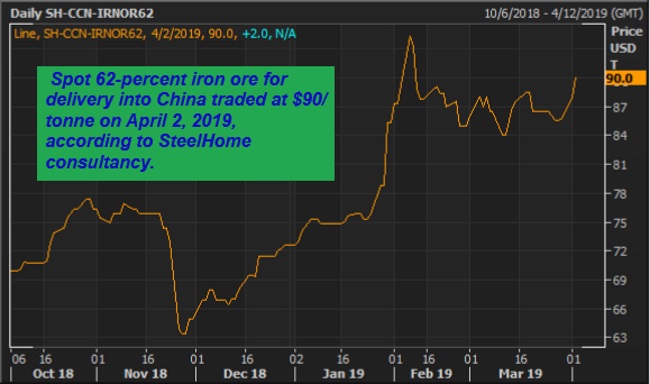 The world’s top suppliers of the steelmaking raw material — Vale SA, BHP Group Ltd, Rio Tinto and Fortescue — have reduced their output and shipment estimates this year, raising concerns the market could be tighter than expected.

Iron ore prices initially rallied after the fatal tailings dam disaster in Brazil in January at a mine operated by Vale.

Last week, the world’s biggest supplier said its sales this year could be up to 75 million tonnes less than initially forecast, after several mines were halted following the disaster.

On Monday, Vale said it failed to obtain stability certificates for 13 dams under review and as a consequence, according to ANZ Research, Vale has suspended operations at 10 dams and dikes in Minas Gerais.

“While iron ore operations weren’t impacted, it doesn’t bode well for the restart of ones currently suspended,” ANZ said in a note.

Weather-related supply disruptions from Australia added to the price pressure, with BHP on Tuesday, saying initial estimates indicated its iron ore production would take a hit of about 6-8 million tonnes after cyclone Veronica affected its operations.

Rio, the world’s No. 2 iron ore miner, on Monday cut its 2019 outlook for shipments from Australia’s Pilbara region due to production disruption and damage caused by cyclone Veronica.

Fortescue said on March 25 it expected 1.5 million to 2 million tonnes of shipments to be delayed by the bad weather.

As steel production curtailments have been extended into the second quarter in China’s steelmaking cities of Tangshan and Handan to curb air pollution, steel prices rose further.

Other steelmaking ingredients were also higher, with coking coal up 0.6 percent at 1,248 yuan a tonne and coke up 0.7 percent at 2,026 yuan.
Source: Reuters (Reporting by Enrico dela Cruz; Editing by Rashmi Aich)

2019-04-04
hellenicshippingnews..
Previous: US’ 2020 thermal coal exports to fall as much as 20% on seaborne price weakness: Seaport
Next: Brexit: Government did not speak to French ports in no-deal plan