China is poised to inject more fuel supplies into the Asian market as part of its supplementary quota for the first batch, but the new export volumes are too little to quench Asia’s growing thirst for transportation fuels, leaving middle distillate cracks at multiyear highs.

Demand for transportation fuels has been picking up in Asia, outside of China, as higher vaccination rates and improved mobility push regional economies to open. However, global oil supplies are not keeping pace with recovering demand, warn analysts.

Refiners in the Middle East are mainly focused on delivering oil products to Europe, and with limited supplies from China, many Asian nations — especially those in Southeast Asia and Oceania — are relying heavily on South Korea for their fuel requirements, according to gasoline and diesel traders and distributors based in Hanoi, Melbourne, Jakarta and Singapore.

“Beijing’s quota allocation aims to offset domestic inventory pressure instead of comforting the regional market, while the increase in China’s actual oil product outflow may more or less be like a drop in the bucket,” a Singapore-based trader said.

The new export quotas could mean that China would be able to raise gasoline, gasoil and jet fuel exports to over 3 million mt in June from the planned outflows of above 2 million mt initially. However, the estimated June export volume is still about 36% below the shipments seen in the same month a year earlier.

Beijing is lowering the country’s oil product exports despite strong demand in Asia and hefty exporting margins, which were estimated at $30/b for gasoline and $40/b for gasoil by analysts.

Taking into account the recent quota release, including the 1 million mt quota mainly for refueling jet fuel at China’s international airports, total allocation for 2022 stands at 17.5 million mt as of June 17, still down 40.7% on the year. 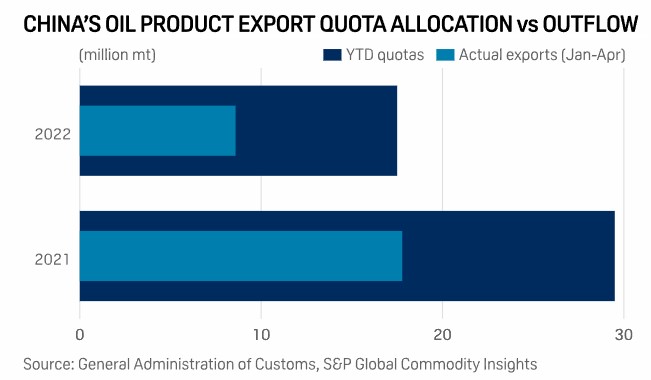 As a result, the Platts FOB Singapore 10 ppm sulfur gasoil cargo and jet fuel kerosene cargo cracks against front-month cash Dubai have averaged $60.42/b and $49.47/b in June to-date, up from $45.31/b and $34.83/b over May, respectively, S&P Global Commodity Insights data showed.

The June 1-16 average of physical FOB Singapore 92 RON gasoline crack against the front-month ICE Brent crude futures widened $1.17/b on the month to $29.91/b, S&P Global data showed. 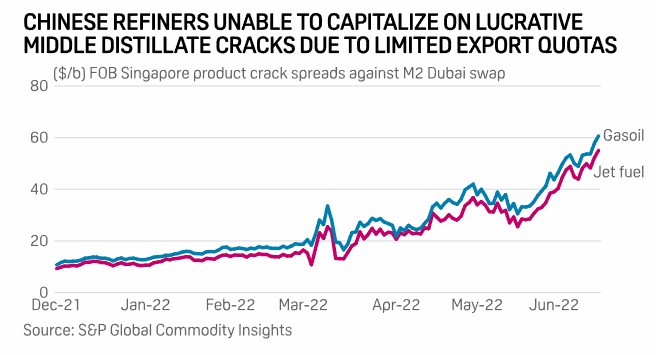 Among the three products, Chinese oil companies are looking to maximize gasoline exports in June to ease their inventory burden, with the expected outflows of 1.4 million mt this month from about 800,000 mt in May, market sources said.

But market sources fear China’s gasoline exports would do little to help Asia, which is facing growing demand requirements from countries such as Indonesia and Malaysia. Meanwhile, the bullish US-RBOB crack serves as the dominant factor influencing Asian gasoline prices.

China gasoline supplies are expected to head towards Indonesia due to a similarity in specification, according to sources.
Beijing to save jet fuel for local consumption?

In the Asian jet fuel/kerosene market, some traders even expect China to cut exports of jet fuel as it looks to keep barrels for domestic consumption.

“I was hearing 400,000-500,000 mt [for China’s June export volumes] due to better domestic demand after some of the lockdowns eased,” a Singapore-based trader said.

If realized, China’s June export volumes would be lower than May’s outflows, which has been estimated at 700,000-750,000 mt, market participants said in the week ending June 18.

The strength in Asian jet fuel/kerosene market is supported by robust demand for air travel in the region and limited jet fuel production as regional refiners still prefer to maximize gasoil output due to a weak regrade, sources said.

The government end-May said to relax curbs in the aviation sector in a bid to ensure smooth working of industrial supply chains and lift business travels.

The country also lowered its jet fuel output to a 10-year low of 1.75 million mt in April and the volume is likely to stay at the same level in May, according to China’s official data.

Most regional traders expect gasoil cracks to remain the most lucrative of the three oil products, as China’s exports of distillates are likely to be tilted towards gasoline and jet fuel instead.

“From my point of view, not big impact because any how gasoil export volume [is] limited,” a Singapore-based gasoil trader said.

The Beijing-based analyst estimated China’s gasoil exports to reach 800,000 mt in June, higher than the initial planned exports of less than 200,000 mt before the allocation of quota. But the volume will still be far below the 2.36 million mt in June 2021.

The reinstatement of lockdown measures in some parts of China to curb the pandemic resurgence is making domestic oil product demand outlook murky, particularly for transportation fuels.

Still, most sources expect China’s gasoil outflows to be limited as the distillate will likely be used by construction and industrial sectors to rev up economic activities in the Asia’s largest economy after prolonged lockdowns.
Source: Platts

2022-06-20
hellenicshippingnews...
Previous: Asian LNG buyers face challenges restocking for winter as Freeport outage ripples into Q4
Next: Significant increase in number of shipments from Danube ports but only with small vessels