China’s primary aluminium production has recovered from the lows seen in the second half of last year after being hit by a double whammy of dual-control measures and a power crunch. On Monday, the National Statistics Bureau reported a record high of 3.36mln tonnes of primary production in April. The production recovery was largely anticipated. Back in January, we had expected that there would be some fine-tuning to the ‘twin-carbon’ goals on the way so that there may be less disruption to production when regional governments carry out their decarbonisation-related works this year. However, the speed of recovery came faster than expected. 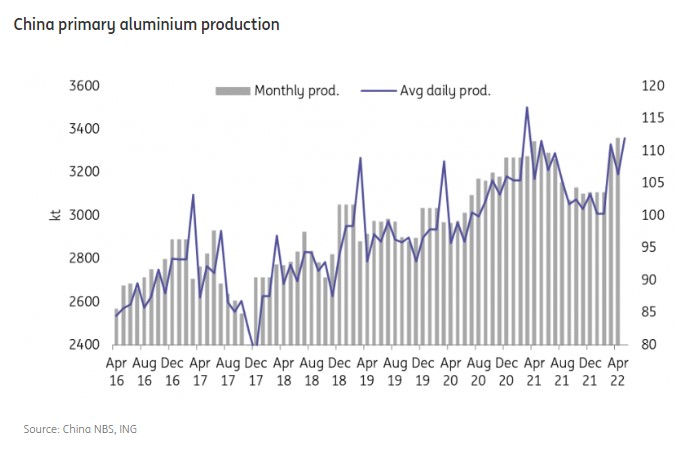 First of all, after President Xi’s comments in January, this seems to have provided leeway for officials at multiple levels to recalibrate their priorities. Second, the Covid outbreaks since late 1Q22 are taking a heavy toll on the economy. Therefore, local governments are under huge pressure to prioritise economic growth and job preservation rather than continue with their aggressive campaign on carbon reductions. Thirdly, senior-level policymakers have orchestrated efforts to boost coal supply and keep power supply adequate for industrial production. Although for aluminium, an improved hydropower generation from Yunnan is a bonus due to the higher water reservoir this year’s rainy season.

As this year’s growth target gets increasingly out of reach, pragmatism could win again for the time being. The Communist Party’s Qiushi magazine, published today on the front page, reiterates Xi’s old speech six months ago on ‘dual-carbon’ goals and calls for a better balance of the long-term and short-term goals.

The restarts of suspended capacities, as well as some newly built capacities, are mainly seen in southwestern China Yunnan and Guangxi provinces; both are relatively underdeveloped provinces in China. In contrast to 2H21, local governments have turned supportive of production restarts so far this year. Another one million tonnes of capacity is scheduled to come online from Guangxi province during the remainder of the year.

However, costs are rising from petroleum coke to carbon anode mainly due to raw material constraints. In May, prebaked carbon anode (accounting for about 13% of primary aluminium smelting costs) and its key raw material petroleum coke prices hit a record in China. Hence, smelters margins have started to weaken. It remains to be seen whether costs will continue rising and eroding margins, so this may slow down the smelters’ restarts later this year.

As supply growth beat expectations, demand has fallen sharply since Mach after Shanghai plunged into strict lockdowns and other areas followed. This, compounded with a deterioration of overall risk sentiment amid the Fed’s more aggressive policy stance, has seen aluminium prices fall sharply. In relative terms, Shanghai prices have been weaker than London, reflecting weaker market fundamentals. However, European smelters have been unable to restart so far, leaving a tight market which is supportive of the LME inventory drawdown. Hence, markets (China vs ex-China) have become further polarised. 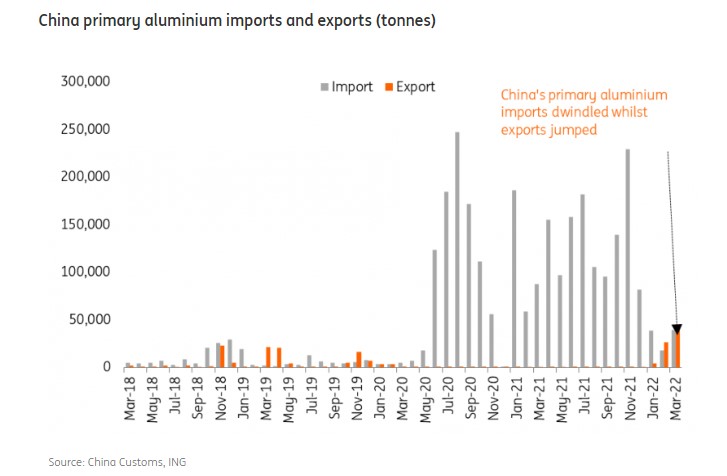