Steel and iron ore futures in China extended their rally to the seventh session on Tuesday, with rebar hitting its highest since 2011, amid increased demand from construction sector and with steelmaking raw material iron ore marking another record.

Steel appetite in China typically picks up at the end of winter, with April and May seen as peak season as construction activity resumes amid warmer temperatures.

Steel mills also ramp up their production in anticipation of additional demand as China plans more infrastructure projects to support its cooling economy.

With domestic demand improving, selling steel to the local market is favourable for Chinese steel producers than exporting their products, which is now 20 percent less profitable, he said.

At current price levels, however, Toh said it is tempting for market players to take profits.

The increased demand for steel added support to iron ore, which had gained 15 percent in a span of six sessions from March 29 to April 8 amid declining shipments to China from major producers in Brazil and Australia.

“While the closures of Brazilian mines is the main focus, disruptions to Australian exports have rattled markets in recent days,” ANZ Research said in a note.

Brazil’s iron ore exports in March fell 23 percent from February and 26 percent from a year ago, as top miner Vale SA’s operations were curbed following a fatal tailings dam disaster in January.

The most traded iron ore on the Dalian Commodity Exchange jumped to 720 yuan a tonne, the benchmark’s highest since 2013, when the futures contract was launched. It ended the session 0.7 percent higher at 706.5 yuan.

The seven-day rally is the Asian benchmark’s longest since November 2017. 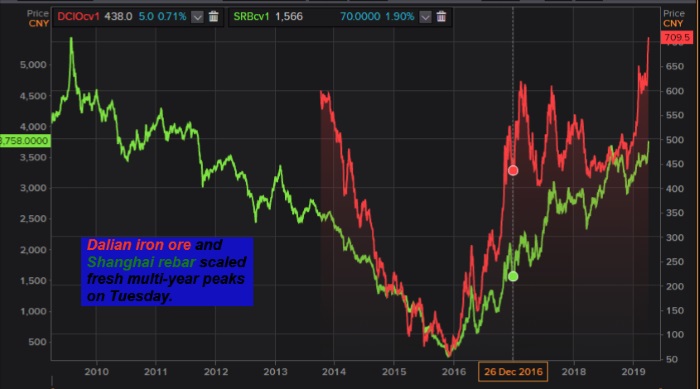 While market participants were “on the edge” amid reports that tropical cyclone Wallace was approaching the Western Australian coast, ANZ said the weather disturbance was “for the moment … not expected to have a big impact”.

Australia’s iron ore miners such as BHP Group Ltd, Rio Tinto and Fortescue have reduced their output or shipment estimates after cyclone Veronica hit their operations towards the end of March.

The benchmark spot iron ore for delivery to China rose 1.1 percent to $94 a tonne on Monday, according to SteelHome consultancy, the highest in nearly five years.