A record amount of crude oil is heading from the United States to China next month, but rather than signalling that the trade deal between the two countries is working, it serves to underscore just how far Beijing is from meeting its commitments.

A total of 31.02 million barrels of crude on 26 vessels is due to arrive in China from the United States in July, according to vessel-tracking and port data compiled by Refinitiv.

This equates to about 1 million barrels per day and is more than double the previous best month of 466,000 bpd in June 2018.

The paltry volumes of crude imports was despite the January “Phase 1” trade agreement between Beijing and the administration of President Donald Trump.

The bumper July arrivals of 1 million bpd were most likely arranged at the time of the price war between Saudi Arabia and Russia, which saw crude prices plummet, with West Texas Intermediate futures even turning negative.

This means that the price Chinese refiners will have paid for the July cargoes is likely to be on the low side, and certainly nowhere close to the current WTI price of $38.14 a barrel.

Assuming a price paid of around $20 a barrel for the oil arriving in July and it work out to around $600 million.

Now, assume a best case scenario that China’s imports of U.S. crude reach a “new normal” of around 1 million bpd, and furthermore assume that prices average $40 a barrel for the foreseeable future.

This means that if China imported 1 million bpd from the United States from July to December it would cost about $7.36 billion.

That may sound impressive, but is not even enough to match the 2017 baseline of China’s energy imports from the United States, far less the agreed increase in terms of the Phase 1 deal.

And the likelihood of China continuing to import at the pace forecast for July already seems remote, with August arrivals so far slated at just 7.04 million barrels, according to Refinitiv.

There is still a small window for August-arriving cargoes to be arranged, but given the voyage time of at least five weeks from the U.S. Gulf to China, and more usually six to eight, it seems unlikely that the volumes for August will rise significantly. 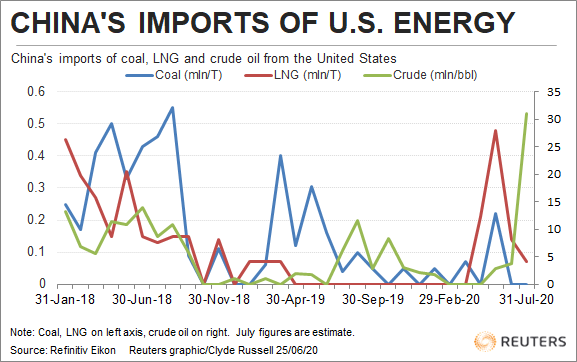 Can coal and LNG help make up some of the numbers? The short answer is no and the outlook is equally bleak.

China hasn’t imported any U.S. coal since May and none is booked for arrival in coming months.

So far this year only 285,600 tonnes of U.S. coal has arrived in China, and even assuming it is all higher value coking coal used to make steel, it would still only be worth in the region of $40 million, assuming a price of $140 a tonne, which is line with the Singapore Exchange futures price that prevailed earlier this year.

There was a little flurry of U.S. LNG cargoes arriving in China in April and May, when 10 vessels carrying 693,000 tonnes of the super-chilled fuel discharged cargoes.

But this has dwindled to two ships in June and one booked for July, and nothing on the horizon beyond that.

This is likely because U.S. LNG cannot currently compete in Asia against cheaper spot cargoes from major regional suppliers such as Qatar and Australia.

The spot price for delivery to north Asia was $2.22 per million British thermal units (mmBtu) in the week ended June 19, just higher than the all-time low of $1.85 in the week to May 29.

While U.S. Henry Hub futures are also weak, ending at $1.597 per mmBtu on Wednesday, this doesn’t take into account the cost of liquefaction and freight, which would add at least another $3 per mmBtu to the cost of a U.S. cargo.

Overall, China appears to have made very little effort to meet its energy purchase commitments under the deal with the United States.

While Trump administration officials and the president himself seem to agree that the deal is still intact, it’s obvious that the terms are nowhere close to being met, and the energy targets will be missed by considerably more than the proverbial country mile.

The opinions expressed here are those of the author, a columnist for Reuters.
Source: Reuters (Editing by Kim Coghill)