PetroChina Co.’s Rudong terminal received its first cargo of liquefied natural gas in more than a month this week after its shut-down helped break the country’s 30-month streak of rising imports.

A tanker, Gaslog Singapore, docked at the terminal in Jiangsu province Wednesday and departed the following day with a lower draft, ship-tracking data compiled by Bloomberg show, indicating it discharged LNG. It was the first ship to visit the port since late September, when a pipeline was damaged during a storm.

The loss of the terminal, which is among China’s biggest, contributed to total gas imports dropping to 6.52 million tons in October, the first year-on-year decline since March 2017. Inbound shipments, including LNG and piped gas, were down 780,000 tons from October 2018, according to customs data released Friday. That difference may be mostly attributed to Rudong, which took in about 727,000 tons of LNG last October, compared with nothing last month, according to ship-tracking data.

The outage is also adding to a general import slowdown by China as a trade war with the U.S. takes its toll on industrial activity. Through the end of October, gas imports are up about 7.9% this year, compared with a 33% jump over the same period a year ago. 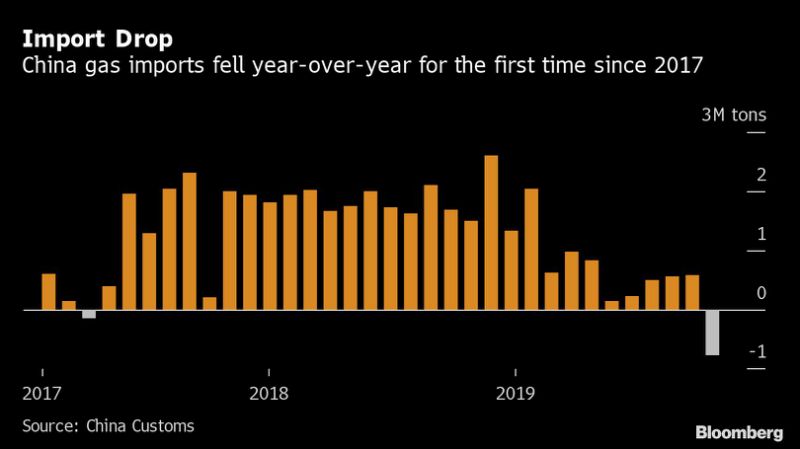 “China’s gas imports growth has been already slowing down since summer,” said Maggie Kuang, an analyst with BloombergNEF. “The outage at Rudong has just made the slow-down even more noticeable.”

It’s unclear how quickly the Rudong terminal will ramp up to full capacity. Repair works are still being completed to allow for pipeline shipments to customers later this month, according to a trader with knowledge of the matter, who asked not to be identified because the information isn’t public. PetroChina didn’t immediately respond to a request for comment.

Milder weather during winter could limit that seasonal demand. There is a “very low chance” of colder-than-normal temperatures in China this winter, the nation’s meteorological administration said on its website Thursday.
Source: Bloomberg