Amid celebrations for the 70th anniversary of the founding of the People’s Republic, China has attained a prime position in many maritime activities. One of the most prominent is the fleet of merchant ships owned by companies based in China, which is now the world’s second largest. Seventy years ago in 1949 participation in international shipping was minimal. Progress in building up the fleet since then has been remarkable, especially during the present century.

Just over a year ago, following rapid enlargement in the previous decade, China’s fleet reached a larger capacity than that of Japan, which had been in the number two position after Greece for an extended period. During the past twelve months the China-owned fleet has continued growing vigorously, reducing the distance behind the number one country in the ranking of national fleets. Currently the China fleet’s capacity is one-seventh of the world total.

From minuscule to gigantic

After the epic voyages of the famous Ming era explorer Admiral Zheng He in the fifteenth century, when China was one of the foremost maritime countries, involvement in international long- distance sea trade ceased almost entirely for five hundred years. In 1949 when the PRC was founded the national fleet was minuscule.

In the early 2000s the China-owned fleet had grown to 5-6 percent of the world’s total, and by mid-2019 the proportion was approaching 14 percent. Over the past decade, since the end of 2009, capacity rose from 74.4 million gross tonnes to 189.3m gt at end-August 2019, an increase of 115m gt or 154 percent, according to Clarksons Research statistics. Within the past five years, as shown by the graph below, the total rose by 63m gt or 50 percent, from 126.1m gt at end-2014. The more rapid growth in China’s fleet than seen in those of other top owner nationalities is clearly illustrated. 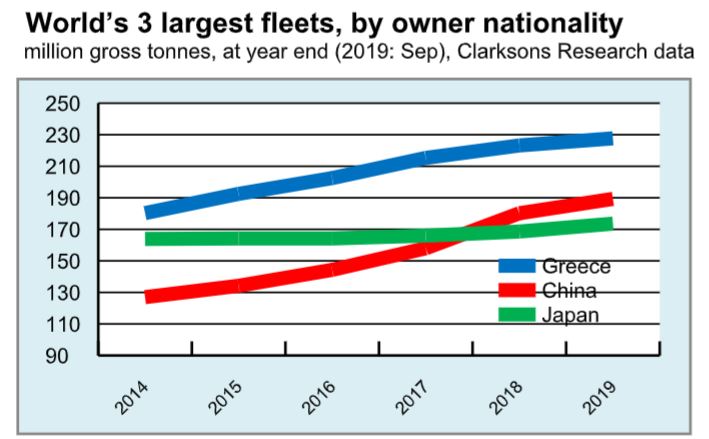 Annual growth rates in the China-owned fleet (which includes all vessels of 100 gt & over but excludes Hong Kong-owned ships) averaged 7.9 percent in the past five complete years, 2014 to 2018. The annual pace of expansion varied widely, from a relatively slow 2 percent (in 2014) to a fast 14 percent (in 2018). In these statistics gross tonnes is used as a convenient common measure of capacity. Ownership country is defined by the location of the company owning and controlling a vessel.

What has driven this strong expansion of the China-owned fleet in the twentieth century? Growth in the country’s seaborne trade flows, both inwards and outwards, clearly has been influential. In particular, China’s rising commodity imports which in several sectors grew to become either the world’s largest or one of the largest import movements, provided incentives to seek greater involvement in sea transport activity. Extensive exports of manufactured goods motivated participation in container shipping services.

Enhanced control over supply routes, providing tighter security of transport services and reducing dependence on foreign carriers has been an intensifying motivation to expand cargo-carrying capacity. The potential for gaining substantial profits, by owning and operating shipping assets, was significant as well.

Soon after the People’s Republic of China was founded, Chairman Mao Zedong declared in 1953 that “(we) must work hard to develop our shipping industry. We must endeavour to build more ships and to create our ‘railway’ at sea”. This prescription, with varying emphasis in policy and practice, has been broadly adhered to over the past seventy years.

In the first decade of this century, when China’s greater presence in global seaborne trade was emerging after joining the World Trade Organization in December 2001, fleet growth was lagging well behind trade expansion. Compared with the development cycle of the European and Japanese economies several decades earlier, when transport capacity for imports of raw materials and other cargoes was carefully planned by industrial users, China’s approach was different. Chinese importers relied more heavily upon the international ocean freight market and foreign shipowners to provide transport, mainly under short-term charter arrangements.

By the end of the first decade investment in new ships by shipowners in China was gaining momentum. But research by economists reportedly emphasised weaknesses among Chinese shipping companies in an international context. Analysis pointed out that under government policy, operating or shipbuilding subsidies were not provided, nor were there advantageous shipbuilding loan rates, taxes, depreciation or other preferential measures available.

During the current second decade the progress of the China-owned fleet can be interpreted as being effectively in a ‘catch-up’ mode. Even so, early in this phase, rapid expansion was not always seen universally as a sound strategy. Long periods of weak global freight markets in the 2010s prevented or restricted attempts to achieve adequate profitability on shipowning activities. Yet still the underlying trade movement security motive for expanding China’s share of its seaborne trade remained intact.

An extra incentive to promote fleet development applied over a period of four years from 2013 to 2017. Amid subdued global shipping markets, the Chinese government unveiled a new scrapping subsidy scheme which was introduced at the end of 2013, initially for two years duration, to encourage investment. The scheme, available only for China-flagged vessels, stipulated that the tonnage of a newbuilding order should exceed that of the vessel sold for recycling. Subsequently this subsidy was extended for a further two years, ceasing at the end of 2017.

Looking at the main vessel type categories and how these evolved during the past five years, 2014 to 2018, the fleet enlargement pace varied. The container ship fleet was by far the fastest growing of the three main segments, expanding from 12.4m gt to 36.2m gt, a 191 percent increase. Tankers saw a 41 percent increase from 22.0m gt to 31.1m gt. In the biggest category, bulk carriers, the fleet expanded by 24 percent, from 73.9m gt to 91.7m gt. Gas carriers, a relatively small segment, saw 210 percent growth from 1.1m gt to 3.5m gt.

China-owned fleet capacity is being further expanded in 2019. Shipowners have been taking delivery of many newbuilding vessels from shipbuilders’ yards within an extensive orderbook schedule. Particularly noteworthy features are the volumes of large-capacity tankers, bulk carriers and ore carriers, and container ships joining the fleet. Smaller ships also are an element.

Orders for new ships to be delivered into the China-owned fleet stretch out through the next two years and beyond. Clarksons Research data, at end-August 2019 shows that (using a common measurement of gross tonnage) the entire newbuilding orderbook for delivery to shipowners in China totals 486 ships of 19.4m gt. The tonnage volume is equivalent to 10.2 percent of the existing fleet’s 189.3m gt capacity. Within this orderbook, 3.2m gt is scheduled for the remaining four months of 2019, followed by 8.4m gt due in 2020 and 7.8m gt in 2021 and later years.

A comparison with the other two largest shipowner nationality countries shows that Japan has a more extensive orderbook, at 29.1m gt, equivalent to almost 17% of the existing Japan-owned fleet. The orderbook for Greece is lower than China’s, at 16m gt or 7% of existing fleet capacity. These differences imply potential for varying future fleet expansion rates. But these are only tentative indications, because actual fleet growth will be determined as usual also by how much scrapping of existing capacity occurs, and the extent of second-hand vessel transactions, whether purchases or sales to owners of other nationalities.

Among newbuilding deliveries scheduled to be delivered into the China-owned fleet over the next couple of years are a number of suezmax and vlcc tankers. Many newcastlemax bulk carriers and also guaibamax and valemax ore carriers have been ordered for delivery in the year or two ahead. By contrast, the mega-size container ship building schedule awaits further activity.

How and where will future new China-owned capacity, as well as recently-delivered vessels, be used? A large proportion seems destined for employment wholly or mainly on trade routes where China is at one end. For tonnage carrying bulk commodities, tankers and bulk (including ore) carriers, these routes will be predominantly those where China is an importer. A proportion of the new capacity probably will at least occasionally seek employment in trades where China is not a destination or origin, the traditional international ‘cross-trades’.

One striking illustration is a multiple order reported a few months ago. COSCO Shipping Bulk ordered 18 (including 2 options) 210,000 dwt newcastlemax bulk carriers from several Chinese shipbuilding yards for delivery in 2021 and 2022, a 3.4 million dwt or higher total. These ships are intended for employment in the long-haul bauxite trade from Guinea, West Africa to China. Large-scale aluminium production in China needs massive imports of raw material for processing into alumina and then aluminium. Mines in Guinea have expanded with Chinese investment boosting supplies, necessitating more transport capacity for this route, facilitated by port upgrades allowing use of bigger bulk carriers than previously employable.

Indications point to continued enlargement of the China-owned fleet over the years ahead, and probably a rising proportion of the world fleet capacity which it represents. Various statements by or attributed to the Chinese government, or people with connections, have created an impression of a broad strategy to reduce reliance on the international freight market, particularly the ‘spot’ market for individual voyage and short-term charters.

A greater uncertainty is what will be the pace of the advance. Even in the relatively short term, predicting China’s fleet development and that of the world fleet as a whole, is an exercise in speculation. It may be a ‘clear’ idea that many more newbuilding ships of various types will be ordered by shipowners based in China, enabling the fleet to continue growing. Beyond this broad notion, however, which arguably seems likely to prove correct, there is a wide range of outcomes both of timing and of capacity volume.

Many factors, including some which may not have been anticipated, will affect future decisions by shipowners in China about extending fleet capacity with newbuildings. There are also the significant aspects of how much of the existing fleet will be scrapped, and whether and to what extent second-hand vessel purchases and sales may be an important influence. These are not elements which can be forecast precisely with any degree of confidence, especially in the longer term: only general assumptions can be made.