China’s state-run oil trader Unipec has purchased around 16 million barrels of US crude oil for loading in June, marking the biggest volume ever to be lifted in a month by the company, informed sources said.

Unipec is expected to receive the June-loading US crude cargoes in July/August and the trading arm of Asia’s biggest refiner Sinopec said it would raise its shipments from the US to China by around 80% to 200,000 b/d in 2018 from around 112,000 b/d last year.

The latest deal came on the heels of recent positive moves in US-China trade negotiations. China and the US agreed last weekend to put the brakes on their trade dispute after Beijing agreed to buy more US goods, key among them being LNG and oil.

“It is just business, and it was mainly to do with wide Brent/WTI spread,” said a company source, adding that Unipec intends to continue purchasing in such large scale volumes going forward.

The state-run trading company’s General Manager Chen Bo said previously the company would use VLCCs to take more crude oil priced against WTI this year as they are more competitive than other grades linked to Brent or Dubai.

Unipec took its first ever VLCC directly loaded from the US in February and expected to follow this path, which enable economies of scale for exports to Asia.

Crude has been exported on VLCCs from the US Gulf Coast via reverse lightering operations, with smaller vessels carrying the cargo to load the carriers offshore until early this year when the Louisiana Offshore Oil Port reconfigured its export facilities to load larger ships, like VLCCs.

Loading a VLCC via lightering typically requires three to four Aframaxes to perform offshore ship-to-ship transfers. Direct loading of a VLCC would cut out the lightering operations.

The recent widening of spreads between the benchmarks Brent and Dubai against NYMEX WTI light sweet crude contract have been encouraging more exports out of the US.

“We are also considering the opportunity of importing US crudes, given the wide spread,” said a refinery source with PetroChina, the second biggest refiner in China. 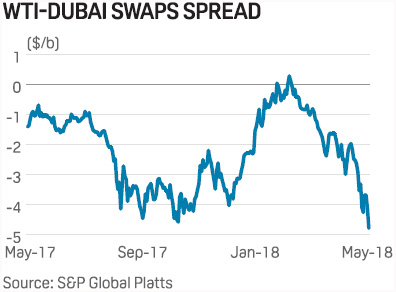 The front-month July ICE Brent/NYMEX WTI spread settled at $7.96/b on Wednesday the highest since March 23, 2015, where it stood at $8.47/b, according to data from S&P Global Platts.

Meanwhile, the spread between the front-month Dubai crude swap against same-month WTI swap tumbled to a discount of $4.78/b Wednesday, the lowest since August 17, 2015 when the discount was $4.83/b.

“Clearly the high discount on the WTI price as compared with Brent is making US crude oil attractive to international buyers,” said Commerzbank analysts in a note.

Chinese end-users may find US crude a suitable and economical substitute to fill the Saudi Arabian supply gap after Unipec said recently the company would reduce its term purchase volume from the major OPEC producer.

State-run oil giant Sinopec indicated earlier this month the company plans to cut back its nominations for Saudi crude by 40% of the total monthly allocations for May-June and even July loading in response to the higher-than-expected Saudi Aramco OSPs.

The company was believed to take around 55% of China’s crude oil imports from Saudi Arabia, which was around 606,000 b/d in Q1, according to data from the General Administration of Customs.

Company sources also said previously Sinopec would get enough supplies from other producers, such as Iran, Iraq, Russia and the US.

Meanwhile, more and more Sinopec’s refineries started to process US crude, most of which are medium sour grades such as Mars and Southern Green Canyon, although light sweet crudes WTI, Bryan Mound Sour and even shale oil from Eagle Ford have joined the flow.

“Mars is similar to Arab Medium from Saudi Arabia, which could be a good alternate in a certain extent,” said the source with Sinopec Guangzhou refinery.

It is a medium density, high sulfur crude oil from the US, which API is around 29.5, and sulfur content around 1.89%.