Chinese coal imports have had a very strong start to the year, despite the coronavirus crisis, proving demand for imports to be resilient, at least for now. Every month so far this year has seen higher imports than the year before, with volumes increasing to 126.7 million tonnes in the first four months, a 27.8% rise from last year. Imports in January and February were artificially inflated by the clearing of coal that had arrived in December but been delayed until the new year by Chinese government policy. On the other hand, its domestic production of coal fell by 0.5% in the first quarter of the year, coming down from growth of 4.2% in 2019.

Iron ore imports have also remained resilient, posting growth of 5.3% in the first four months of the year to 358.4 million tonnes. The extra 18.2 million tonnes of iron ore and 26.8 million tonnes of coal imported by China this year, translates into an additional 225 Capesize loads (200,000 tonnes) or 600 Panamax loads (75,000 tonnes) compared to last year. 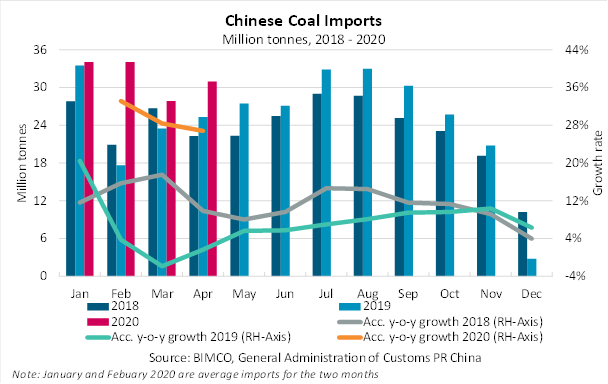 However, the increase in demand has not been enough to lift freight rates in the struggling Capesize market. Having otherwise recovered from their lows in late February/early March when the Baltic Capesize Index (BCI) fell below 0 (-372 on 9 March 2020), freight rates have once again dropped significantly to only USD 2,082 per day on 13 May, their lowest level since Q1 2016, with the BCI falling back into negative territory on 13 May at -17 points.

Freight rates must reach USD 15,300 dollars per day for an average Capesize ship to break-even. On average this year, Capesize ships have lost USD 9,961 per day. BIMCO expects rates to recover slightly but on average remain at loss-making levels for the rest of the year.

An average, a Panamax ship needs USD 10,200 per day to breakeven which, given the year to date average earnings of USD 7,026, has resulted in appalling bottom lines to spot trading ships.
Source: BIMCO

Previous: Sailing beyond corona – investing in a sustainable future for shipping
Next: Tanker Market: Shifting, Turning and Spinning