China’s demand for soybean is forecast to grow in 2020 by 7.8% y-o-y, signalling a positive outlook for the dry commodity as well as for the bulk carriers that transport it.

In the midst of a universal turmoil with the coronavirus having jolted several markets worldwide, the task of envisaging how the world will look like post-pandemic is getting increasingly hard. Chinese grain demand, however, seems to offer a safe haven thus far.

The United States Department of Agriculture revised upward, in its latest report released April, the projection for China’s soy imports in the 2019/2020 marketing year to 89 million metric tonnes, up 7.8% y-o-y. China is a strategic buyer of soybean (which is processed into meal for livestock and cooking oil) and its growing demand offers some good news in an ocean of bad ones. 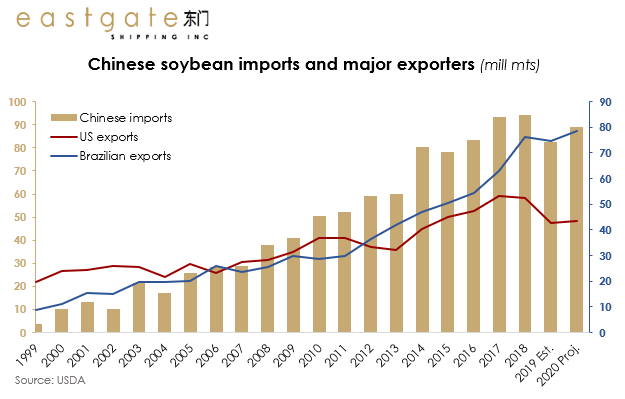 Indeed Chinese crushers seem to be thirsty for beans; one reason being that they need to feed their growing pig farms. Over 40% of China’s swine herd was wiped out last year due to the African Swine Flu, but recent estimates point to a recovery in pig population nationwide near to pre-ASF levels. Subsequently, soybean consumption and seaborne imports are expected to rise.

Of course, this remains subject to ports in South America and China actually remaining open, so that they enable international trade to carry on. To that end, China is anticipated to increase its beans purchases in the coming weeks, in fears that the ongoing pandemic will have safety measures in key export regions intensified.

The large Brazilian harvest and the favourable local currency which makes beans cheaper offer another incentive for the Chinese to increase their buying quantities. Further, almost all domestic crushing plants have now resumed activities, following the suspension to their operations a few weeks back due to a soybean supply shortage.

The agreement between Washington and Beijing under the Phase One trade deal inked January, is another factor which could boost Chinese grain imports. China has committed to import US$12.5 billion worth of agriculture goods in 2020 from the US.

While, under the current uncertain circumstances, a lot is being said about whether China will live up to this number, recent reports suggest that the Far Eastern country might source grains from the US to fill its state reserves, amid concerns for upcoming virus-related supply chain disruptions. It would indeed make sense for the Asian nation to fill up its state grain stockpiles in order to ensure sufficient food supplies moving forward.

Despite the virus having darkened the global economic outlook, the feed needs of the world’s most populous nation remain relatively inelastic and hence not majorly impacted by the demand contraction seen in other sectors.

Although the grain projections indeed look positive, they cannot by themselves support the whole of the dry cargo market and lift rates significantly up. The dry bulk shipping market should be approached in a holistic manner, so we’d need industrial demand to also pick up to claim that healthy rates could be ahead of us.
Source: Eastgate Shipping