Chinese bulk imports have become increasingly important as the world’s second largest economy has grown at a high rate. However, with more and more indicators pointing to a different Chinese growth going forward and increasing trade tensions with the world’s largest economy, things may be changing. China is not isolated in facing difficulties, global manufacturing PMI fell to 51.5 in December, and the IMF predicts global growth will fall from 3.7% in 2018 to 3.5% in 2019.

“Slower growth and outright declines in Chinese bulk imports will harm the shipping industry and the many shipowners who for years have relied on China’s growing imports to ensure employment for their ships.” Peter Sand, BIMCO’s Chief Shipping Analyst, says. 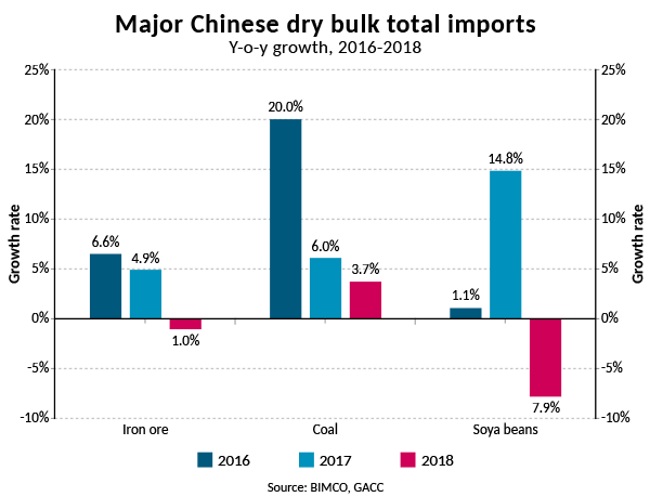 Iron ore imports still over a billion tonnes despite falling

Lower iron ore imports have not however translated into lower steel production. Instead more efficient mills and in particular electric arc furnaces, which use scrap to produce steel have been able to increase production while reducing demand for iron ore. The authorities have also set targets to increase the use of scrap in steel production to reduce pollution.

“Iron Ore imports may start to drop at an even faster pace than we saw in 2018. Therefore, what is usually a mega-driver for dry bulk shipping demand may start to fade and dry bulk ships will have to look for new cargoes.” Peter Sand says.

Chinese coal imports grew 3.7% in 2018 to reach 281.2 million tonnes, but this growth disguises a year of two halves. The month with the highest imports in 2018 was July (29.01 million tonnes), at which point accumulated growth was at 14.7%. After July imports fell on a monthly basis culminating with only 10.2 million tonnes in December. For comparison, December 2017 saw China import 22.7 million tonnes of coal.

Anecdotal evidence suggests that the Chinse customs authorities stopped clearing coal shipments in December. High domestic supplies, a lower growth in electricity demand combined with high stocks led the authorities to wanting to keep imports below the 2017 levels, during which China imported 271 million tonnes of coal.

Chinese soya bean imports fell to 88 million tonnes in 2018, down 7.9% from 2017. A 25% tariff on US soya beans arriving in China in place since July and increased hostilities between the two nations is behind much of this fall.

Brazil managed to meet some of the additional Chinese demand for non-US soya beans during the fourth quarter despite its normal export season running from March through to July. In Q4 2018 Brazilian soya bean exports to China were 131.2% higher than those in Q4 2017. In the full year 2018 an extra 15.3 million tonnes of soya beans were exported by Brazil to China, the equivalent of an additional 204 Panamax loads compared to 2017. 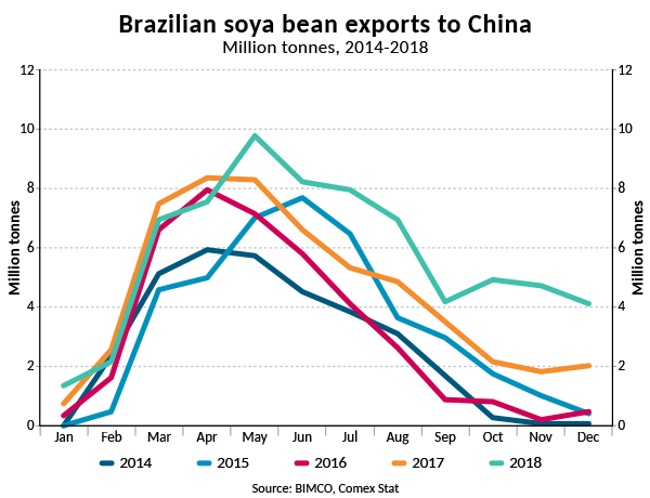 “Lower soya meal content in pig feed to reduce demand for soya beans, tapping into stocks and increased imports from elsewhere have allowed China to shy away from US soya beans for the whole of 2018.

Ongoing trade talks and an apparent Chinese promise to increase imports from the US have led to Chinese buyers slowly increasing their imports of US soya beans in the last few weeks of 2018 and into 2019. But the result of this round of trade talks will likely set the tone for this trade in 2019.” Peter Sand ends.

Despite much talk in the US that China had started buying large amounts of US soya beans, data from BullPositions suggests that only 545,000 tonnes were shipped from Pacific ports to mainland China in the first four weeks of January.
Source: Peter Sand, Chief Shipping Analyst, BIMCO