China replaced South Korea as the world’s second-largest LNG importer in 2017, and again surprised the market in 2018 with a counter-seasonal conundrum of summer shortage and winter oversupply.

But as the energy-consuming giant of Asia continues to grow its LNG infrastructure, and industry players focus on achieving stable and reliable supply, the spot market may be exposed to fewer shocks originating from China in the future.

The trading frenzy seen in 2017 started to cool early 2018, visible in a steep backwardation structure in Asia LNG spot prices rolling from winter into spring. The day-on-day price drop was at $1.25/MMBtu, when the Platts JKM assessment rolled into the new front month of March from February on January 16, 2018, compared to a mere $0.21/MMBtu drop same day in 2019.

The Chinese were at the forefront of the market between October 2017-February 2018, procuring winter spot amid tight global supply and colder-than-expected weather in North Asia. 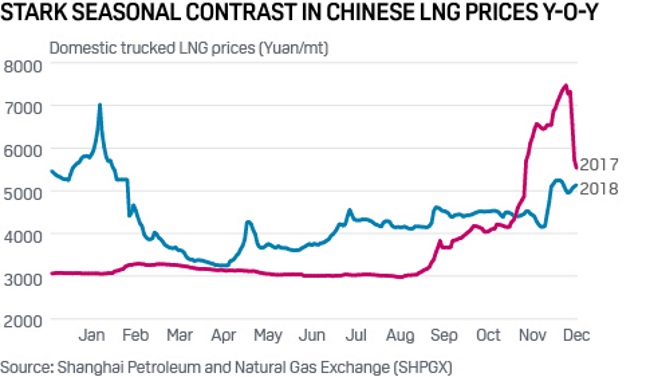 The irreversible part of their demand arose from a politically led coal-to-gas switch in 2017 that resulted in the replacement of coal-fired boilers in more than four million households. The additional upside volatility was attributed to several cold-snaps sweeping across the country and its neighbors, destabilizing gas flows into the massive Central-Asia pipe system that underpins China’s residential winter heating demand.

Natural gas imports from Central Asian countries were then diverted, due to a surge in their own demand amidst a colder winter, sources said. That caused a supply crunch in the Chinese market, sending shocks down to the domestic trucked LNG prices and the residential sector – an undesirable situation that the state planner NDRC would never want to repeat.

While the market expected supply to loosen up stepping into spring and summer 2018, the country continued to surprise on the upside.

Maintenance works were carried out at some of the major gas pipelines, to prepare far ahead for winter 2018/19, as NDRC is under political pressure to ensure energy security for the residential sector during the heating season of mid-November to mid-March. The national oil companies (NOCs) were heard to have restricted both LNG and gas supply in the southern and eastern regions on persistent market tightness.

In summer, electricity for air-conditioning and industrial usage make up the bulk of China’s LNG demand, notably in the warmer and production-heavy southern regions. To make matters worse, a sustained oil price rally between March and October 2018 kept LNG procurement costs buoyant in the international market, as LNG term contracts were predominantly signed on an oil-linked basis.

The NOCs that did not expect a tight summer previously and refused to pay up in the spot market for additional cargoes, then had to put a cap on LNG send-outs.

Summer tightness also set high price expectations for winter. With the fear of staying short for winter, the Chinese were prompted to rush and sign up for winter strips earlier in the year.

Summer strength did not last long however. Once the domestic supply shocks were over, soft fundamentals in the downstream market started to pass on bearish signals.

As US-China trade tensions cast uncertainty over the economy, the government saw a rising need for economic stimulus in reviving the manufacturing sector. There were several cuts in power prices by NDRC in 2018 with the aim of cutting costs for the industrial and commercial sectors, restraining profits for transmission grid companies and major power generators.

A downturn in the Chinese economy, led by the China-US trade war, had a gradual but profound spillover effect on LNG demand in winter 2018/19. The pace of coal-to-gas switching slowed notably, as decision-makers relaxed the pressure to replace coal-fired boilers. That was based on both a weaker economy and the fear of a severe backlash to repeat on gas shortage, like the one happened last winter.

In contrast to the previous winter, the massive crowd of smaller industrial users who wanted to buy “every molecule of available LNG in the domestic market” – as sources put it – were absent.

“There’s no way to support usage of such an expensive fuel, when the economy is cooling”, said an end-user.

Smooth and stable imported gas flows through the Central-Asia pipes, coupled with soaring gas production, also contributed to a saturated domestic market. NOCs were faced with chronic bottleneck issues due to limited regasification and storage capacity. Utilization rates were already higher year-on-year and stretching infrastructure limits, with some terminals running at or above nameplate capacity. 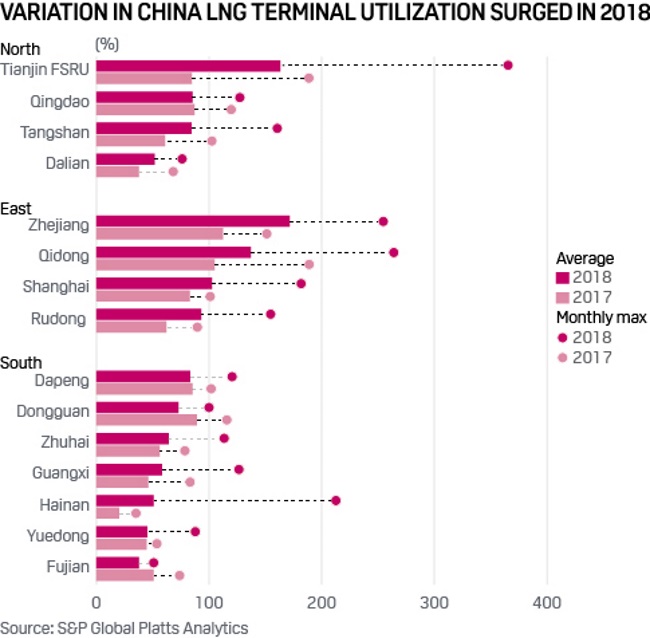 In the spot market, both the NOCs and independent buyers embarked on a selling spree, in an attempt to clear away unwanted yet expensive LNG, and ease their “tank-top” issues. There was talk of more than 10 cargoes floating around the Chinese terminals from end-November to early-December, with some being deferred or diverted.

Significant bearishness continued to feed in towards the end of winter, with the realization later that China would not be on the buy side in the spot market scene.

While Chinese demand fell short of reviving the winter spot market, the country still posted an impressive year-on-year growth of 35% in LNG imports 2018, albeit lower than the 50% hike in 2017.

With a total of 51 million mt LNG imports in 2018 and the current massive expansion in LNG storage and regasification infrastructure, China is on track to overtake Japan as the world’s largest LNG buyer by 2022, reaching 73 million mt/year, as forecast by S&P Global Platts Analytics. However, as Chinese buyers rush out to sign short-term strips and long-term contracts in an attempt to fill up new regasification capacity – in the interests of energy security and supply stability – little room could be left for spot trade growth despite an overall growing pie.

In the coming years, the policy-driven growth in China’s LNG demand has now been accepted by many as the new normal, rather than a surprise factor.
Source: Platts

2019-03-07
hellenicshippingnews..
Previous: Base metals due to see uplift from Chinese stimulus in second half
Next: China’s iron ore futures fall as anti-smog measures weigh