In a stark display of the weak demand undermining the containerized ocean freight industry, the latest data from Xeneta reveals carriers blanked more than six times the number of sailings on the main Asia to US West Coast corridor leading up to Chinese New Year as they did in the equivalent period of 2019. And, according to Xeneta, this may be just the tip of the iceberg, as current data only counts blanked sailings announced before 6 January, with the New Year arriving on 22 January.

The Oslo-based firm, which crowdsources real-time ocean freight rate data from global shippers, notes that, in the four weeks leading up to the holiday, carriers announced the blanking of 220 489 TEU on the trade. This is a dramatic increase from the 29 796 TEU blanked in the same period of 2019, the last full pre-pandemic year.

Other leading corridors also suffered, with the Asia – North Europe trade seeing blanked sailings increase 715% against 2019 figures, currently standing at 226 000 TEU, while those from the Far East to the US East Coast climbed by 340% to 140 000 TEU.

“This really does demonstrate the low level of demand gripping the industry at present,” states Peter Sand, Xeneta’s Chief Analyst. “In a normal year, we tend to see very few blanked sailings in the run up to this major Chinese holiday, as shippers stock up on their inventories. So, this is a worrying development for carriers, and, no doubt, a bad omen of what’s to come for the year ahead.” 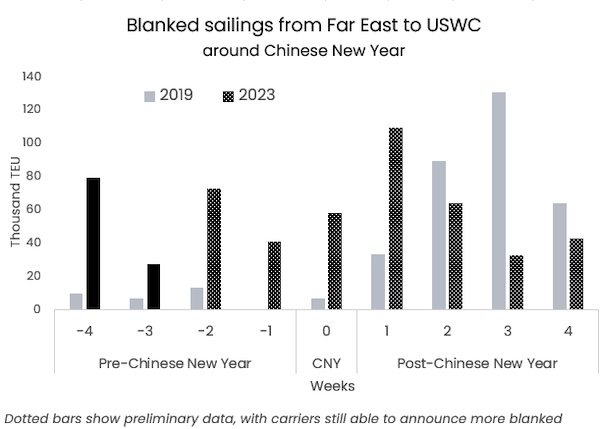 Sand adds that the week of the holiday itself has also seen a reduction in activity, with blanked capacity on the Asia to the US West Coast route currently standing at 57 970 TEU, a steep increase from the 6 800 TEU blanked in 2019.

“And these figures will likely increase in the run up to 22 January,” he notes, “as will the number of blanked sailings in the four following weeks, when carriers traditionally limit their offerings in line with the drop in Chinese manufacturing and subsequent exports. At the moment there’s some 68 000 TEU of blanked capacity announced for this post-New Year period, which is actually less than 2019. That said, there’s still plenty of time left for carriers to remove further capacity – so expect this year’s total to eclipse 2019’s.”

Despite the subdued outlook, Xeneta’s analysis shows that blanked sailings were actually far greater in number last year. However, this was, as Sand points out, an exceptional situation.

He explains: “The current levels are about half of the blanked capacity seen around New Year 2022. However, that was due to huge strains on global supply chains, with congestion and a lack of equipment derailing schedules. In some cases carriers were forced to add weeks to round trips making it impossible for ships to get back in time for their next scheduled departure.

“This year is very different. It’s a clear issue of depleted demand – as we can see by the falling ocean freight rates as carriers compete for business – rather than either congestion, covid or any other ‘structural’ challenges.

“In conclusion, it’s difficult to see much New Year cheer on the horizon for the industry right now.”
Source: Xeneta