As iron ore prices surge, the spread between medium- and low-grade iron ore in China has narrowed to its smallest in two-and-half years, with some buyers turning to low-grade product from countries like India to fill blast furnaces.

But profit margins tumbled more than 50 percent over the past two months to around 350 yuan ($50.50) a tonne for rebar, according to data tracked by Jinrui Futures, after supply disruptions in Brazil and Australia pushed up iron ore prices, as well as some nervousness about future demand. 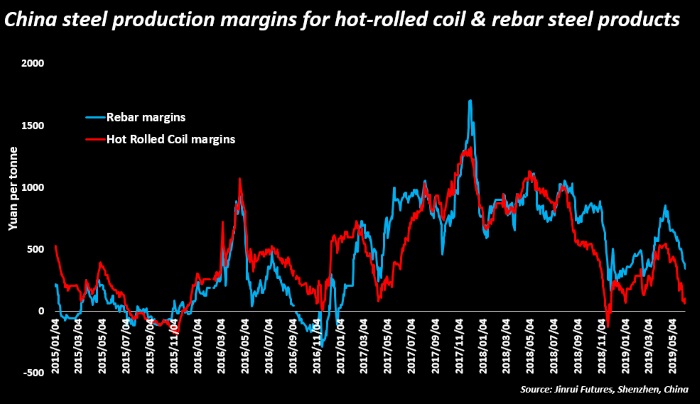 “Appetite for iron ore is switching to low-grade products,” Li Qiangdu, general manager at Shandong Steel International Co, told an industry conference in Qingdao last week. “That will push prices higher and lead to shortages of some (low-grade) products.”

Prices of low-grade 58% iron-content ore for delivery to China have already surged 72% so far this year, while 52% ore, which comes mainly from small miners in India and Indonesia, has nearly doubled since the beginning of this year.

Managers at steel mills and industrial experts expect margins to fall further in the second half amid waning demand from construction and a sputtering manufacturing sector, in the absence of government stimulus measures.

This in turn is expected to sustain the grade-switching trend.

“Steel mills are getting more flexible on iron ore purchases. They make adjustments on the proportion of different raw ingredients alongside market prices,” said a trader in Tangshan, China’s top steelmaking city. He declined to be named as he is not authorised to talk to media.

Traders said further margin weakness will spur demand for lower grade ore from farther afield, including from India, South Africa and even Indonesia, particularly if stocks of domestic ore continue to decline.

Vessel-tracking and port data compiled by Refinitiv show that iron ore shipments departing India for China jumped 66% last month from April to the highest level in two years at 932,200 tonnes. 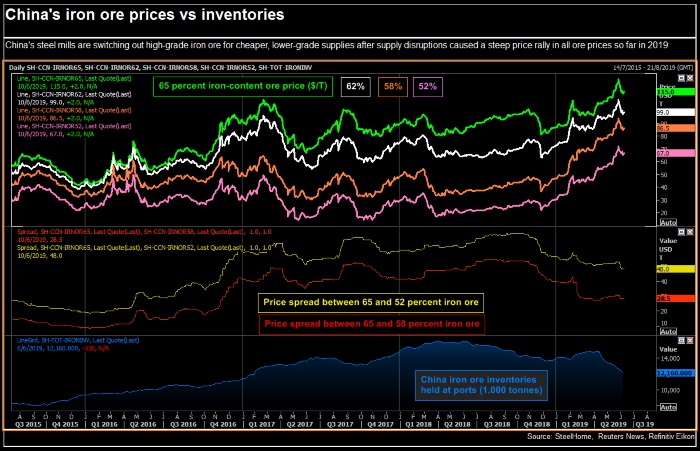 Traditionally, steel mills tend to be cautious when changing the mix of raw material in their portfolio as this can cause instability in blast furnaces and reduce the quality of the steel products.

However, total stocks of imported iron ore at Chinese ports are at 121.6 million tonnes, the lowest level in over two years, data tracked by SteelHome consultancy shows.

2019-06-13
hellenicshippingnews..
Previous: Container Shipping: The many pitfalls in the coming months will decide the fate of the year
Next: Tanker Shipping: While we wait for 2020 to kick in, it’s all about politics