Clarksons: Shining Some Light On The Seasonal Sequence

In 2018 the ClarkSea Index had a very strong Q4, with the average in the final quarter well above that registered across the first three. It’s well known that shipping markets can be seasonal, and studying our ClarkSea Index illustrates that fairly well. But how seasonal actually are they, how far did last year’s Q4 stand out, and how much does a strong Q4 tell us about the year to come?

In 2018 the ClarkSea Index (our weekly index tracking earnings in the tanker, bulker, containership and gas carrier markets) averaged $12,144/day, 13% up on 2017. The fourth quarter average, however, stood at $14,546/day, up 24% on the average since the financial crisis, and 28% up on the Q1-Q3 average in 2018. Observers should probably always expect some seasonality in the shipping markets. The shipping of energy commodities generally peaks in the winter months to meet northern hemisphere demand, and in general second half shipments of mining commodities are firmer than in the first half when mines and associated infrastructure in many parts of the world are liable to impact from adverse weather. The container cycle is a little different with the peak across May to October as retailers stock up for holiday season shopping, but overall Q4 is often a seasonal high for volumes, and earnings too. 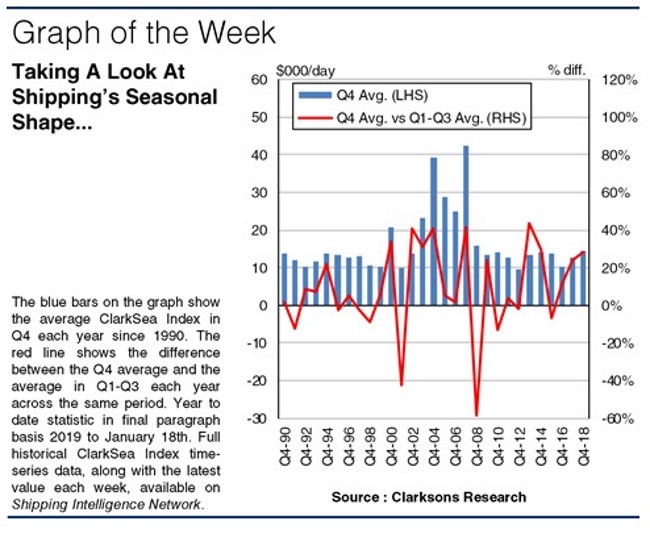 Looking at the last 29 years, a pattern is relatively clear. In 13 years, Q4 was the quarter witnessing the highest average ClarkSea Index. And on average Q4 was 9% above the Q1-Q3 average. That’s a fair degree of seasonality reflecting the drivers listed above. At 28% above the average for Q1-Q3, last year’s Q4 demonstrated over 3 times as much as the average seasonal difference. Tanker earnings in particular spiked hard, with VLCC average spot earnings at $40,331/day in Q4 compared to just $7,304/day in Q1-Q3, dragging the ClarkSea Index up, even as easing containership charter rates were applying negative pressure. But on the other hand even if Q4 saw quite a performance, 7 years since 1990 have seen greater Q4 ‘surges’.

However, of even more interest to investors might be whether this tells us anything about the coming year! Interestingly, over the period in question, the full year average has a correlation of 85% with the Q4 index of the previous year. Maybe that’s no surprise given that market conditions often evolve over time. The average index the following year was on average just 1% different from the previous Q4. However in 7 years across the period the index was more than 15% below the previous Q4. Maybe not such a hard and fast indicator after all…

2019 has already seen the index drop back to an average (to date) of $14,020/day, 4% down on the Q4 average. Maybe that’s a sign that Q4 is no great indicator of immediately better times, or maybe it’s Q1 seasonality at play (worthy of analysis in its own right!). Either way, we’ll keep a close eye on the ClarkSea Index each week (see front page of SIW) to see how the markets develop. Have a nice day.
Source: Clarksons

Previous: Dry Bulk: Capesize Index Slips Across the Board
Next: Product Tanker Owners’ Fortunes to Improve In Second Half of 2019 on New Refinery Additions