Clean Oceans Thanks To Robots And AI

Today’s oceans contain 26-66 million tons of waste, with approximately 94% located on the seafloor. So far, collection efforts have focused mostly on surface waste, with only a few local efforts to gather underwater waste, always involving human divers. No solution exists that exploits autonomous robots for underwater litter collection. A team of researchers in a consortium of eight European partners from Germany, the Netherlands, Croatia, France, and Romania, are now working on the development of autonomous robots for underwater littler collection. The objective of SeaClear – acronym for “SEarch, identificAtion, and Collection of marine LittEr with Autonomous Robots” – is to operate the robots autonomously, without remote human intervention. The consortium plans novel developments in debris mapping, classification, and robot control. When fully operational, the SeaClear system aims to detect and classify underwater litter with 80% success rate, and to collect it with a 90% success rate. 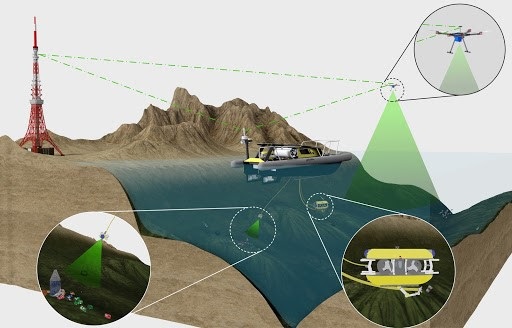 The SeaClear project will build a mixed team of unmanned underwater, surface and aerial vehicles to find and collect litter from the seabed. The project plans to use aerial vehicles to study the correlation between surface and underwater litter. The underwater vehicles will be fitted with special suction grippers for both small and large waste. The system developed will be demonstrated in two case studies: one in the Port of Hamburg, and the other in a touristic area near Dubrovnik. Besides Fraunhofer CML and the two end-users, the consortium includes an SME supplying proven hardware for the platform, and three academic institutions with complementary expertise in underwater and aerial robotics, sensing, mapping, and control. SeaClear receives 5 million Euro funding from the European Union’s Horizon 2020 research and innovation programme (Grant Agreement No 871295).

The most important task of CML is the management and implementation of “system integration”. In this work package the hardware and software infrastructure as well as the interfaces for data exchange between the robot vehicles and the shore control centre are designed and implemented. The reliable and robust transmission of information is a decisive prerequisite for the shore control centre to be able to control the deployment, navigation and monitoring of the unmanned vehicles later on.
Source: Fraunhofer CML

The spike before the slump? Australian coal exports to China soar in May