Investors looking to China’s official production data to help divine where coal prices are heading might need to be extra cautious.

Coal mining figures from the National Bureau of Statistics are flashing mixed signals. The agency pegs first-half output up 3.9 percent from a year ago. Yet in absolute terms, the volume has come in below last year consistently in 2018. That’s spurred speculation production in the world’s largest miner and user of the fuel may be slipping, and could help explain why regulators have been unable to get prices down to their targeted levels. 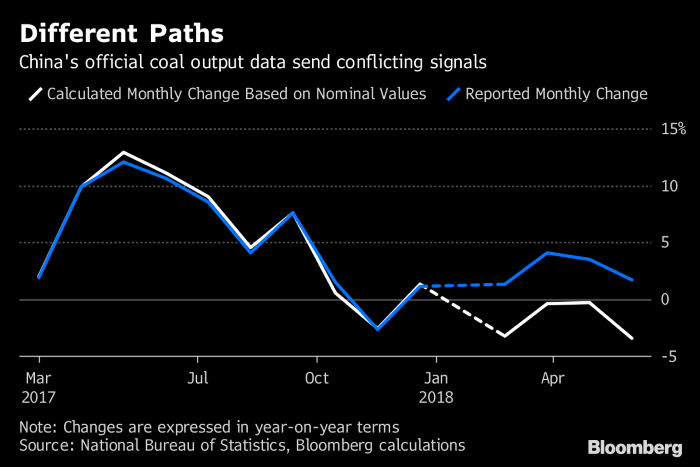 “Most industry people are puzzled by the numbers,” said Michelle Leung, an analyst at Bloomberg Intelligence in Hong Kong, adding that the issue has been seen in China’s data for other industries as well.

The NBS didn’t respond to requests for comment. The bureau has flagged that its coal output figures factor in firms with annual revenue above 20 million yuan, meaning the sample set could potentially change. It also at times changes its methodology or sample sets to improve quality, as it did this year when it rearranged some industries within energy consumption data that’s broken down by sector.

China’s statistics, especially for gross domestic product, have long been dogged by doubts over their reliability, with recent revisions to provincial growth and revenue data reviving concerns. Sheng Laiyun, chief economist of the NBS, said in September that authorities are shifting to the latest United Nations-based statistical standard, gathering more comprehensive data from a major census this year, and cutting local interference and double accounting.

This year, a surge in prices above the government’s preferred levels of 570 yuan ($84) a metric ton has led regulators to call on miners to boost operations, though a separate drive for environmental and safety inspections has been cited for slowing the ramp up.

“I wouldn’t be surprised to see weak production data in the first half due to safety and environmental checks,” said Jennifer Song, an analyst at Morningstar Inc. “Our recent visits to coal companies suggest that coal output growth in the second half should be better than the first half.”