Coal shipments to the U.S. power sector continue to fall

Plant location and access to the rail system largely determine the primary way a power plant receives its coal. River barge (waterway) is often the most cost-effective method of transporting large quantities of coal over long distances, but this option is limited to plants located on suitable rivers. 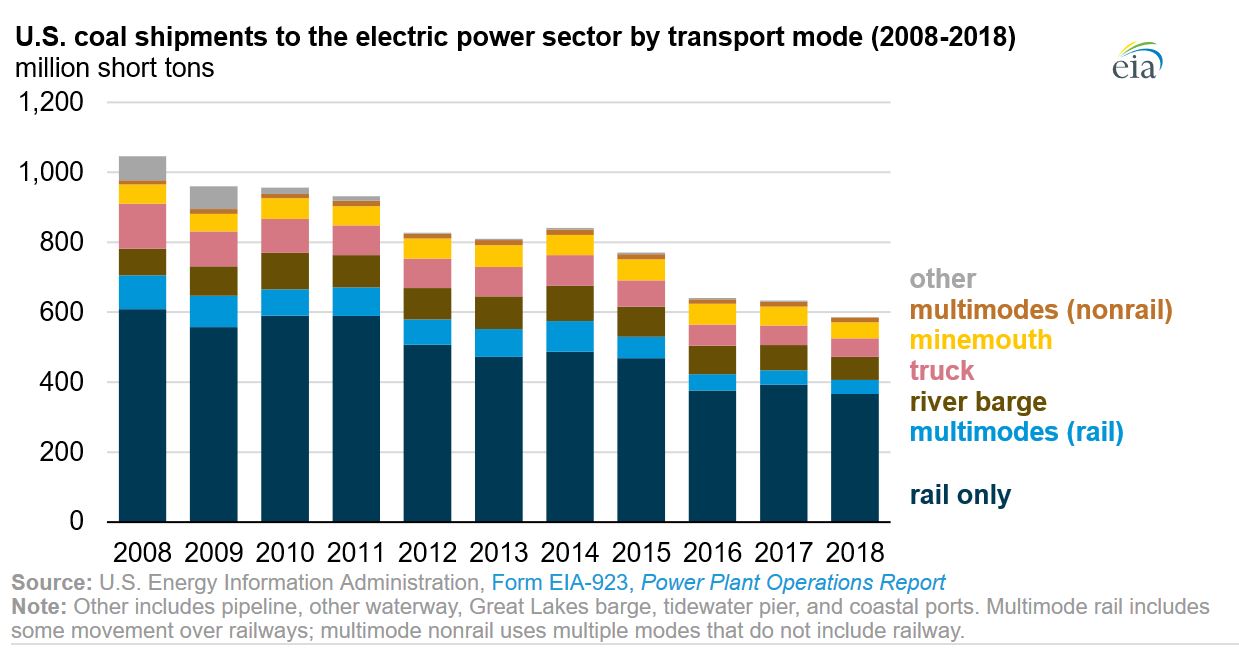 Transporting coal by rail is more expensive on a per-tonnage basis, but it is the dominant mode for transportation because of the extensive railway network that covers the United States and because coal is produced in relatively few parts of the country. Nearly all U.S. coal comes from four regions: the Powder River Basin (Wyoming and Montana), the Illinois Basin, Central Appalachia, and Northern Appalachia. Although single-mode shipping is more common, individual coal shipments can be transported by more than one mode.

Coal shipments to the electric power sector in 2018 were 7% (47 MMst) lower than the previous year. Of all modes, shipments to minemouth plants—or power plants built close to coal mines—declined more substantially than other transport modes, falling by 15% in 2018. Rail shipments (rail only and multimode) decreased 6%. During the same period, coal shipped by waterways fell 9%, and coal transported by truck decreased 6%.

EIA’s surveys also capture transportation costs by mode. Truck transport costs increased for the second consecutive year while both barge and rail costs remained relatively flat. In addition to costs associated with a particular mode of transport, factors such as route length, availability of transport mode and supply source options, and the competition between coal and other commodities for transport can affect the overall transportation cost.

EIA released updated tables that show average costs per ton by mode and year on a coal basin-to-state basis and on a state-to-state basis. EIA’s updated summary of coal transportation rates through 2018 show the average real costs per ton of transporting coal from mines to power plants by mode based on data reported by plant owners and operators in EIA’s Power Plant Operations Report.

2019-09-14
hellenicshippingnews.
Previous: LNG Hub Built to Ease Energy Link to Russia Gets Siberian Cargo
Next: US Shale To Grow To 14.5 Million bpd By 2030