Home / Commodities / Commodity News / Coal stockpiles at U.S. coal power plants were at their lowest point in over a decade

Coal stockpiles at U.S. coal power plants were at their lowest point in over a decade

Coal plants generally stockpile much more coal than they consume in a month. Coal consumed by power plants follows the seasonal pattern in overall electricity generation, meaning coal consumption is typically highest in summer and winter months. Because coal-fired power plants are consuming more coal in the warmest summer months and coldest winter months, coal stocks at power plants are often at their lowest in August and February. 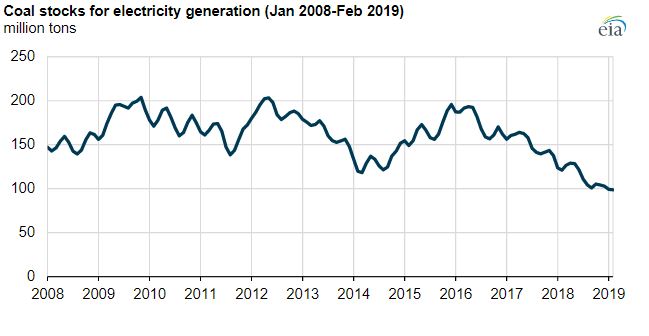 In addition to surveying coal stockpile levels, EIA also calculates how long these stockpiles would last, assuming the power plants receive no additional coal. This value, known as days of burn, considers each plant’s current stockpile level and its estimated consumption rate in the coming months. In February 2019, U.S. coal power plants had, on average, about 90 days of burn. 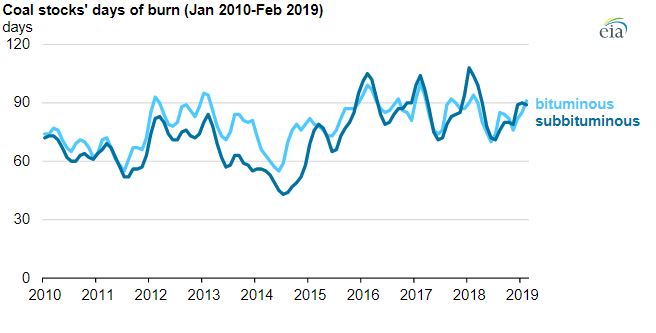 Because coal-fired power plants use different types of coal, EIA tracks this data based on coal rank. The two main types of coal used for electricity generation in the United States are bituminous coal, which is mostly produced in states such as West Virginia, Illinois, and Pennsylvania, and subbituminous coal, which is mostly produced in Wyoming. 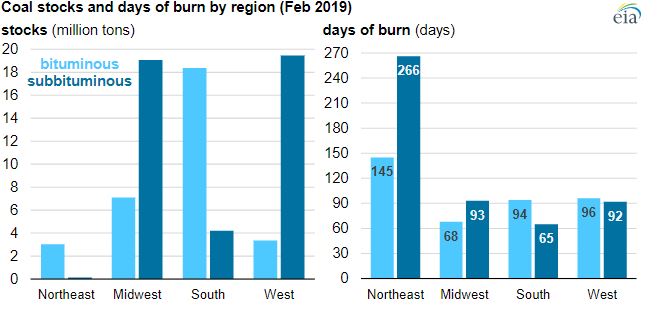 EIA expects coal stockpiles to remain relatively low throughout 2019, according to forecasts in EIA’s latest Short-Term Energy Outlook. Coal is expected to be the second-highest fuel for electricity generation in 2019, providing 996 million megawatthours, or 24% of total electricity generation, second only to natural gas at 1,505 million megawatthours (37%). To provide that electricity, the U.S. power sector is forecast to consume about 555 million short tons of coal. If realized, this level of coal consumption by the U.S. power sector would be the lowest since 1979. 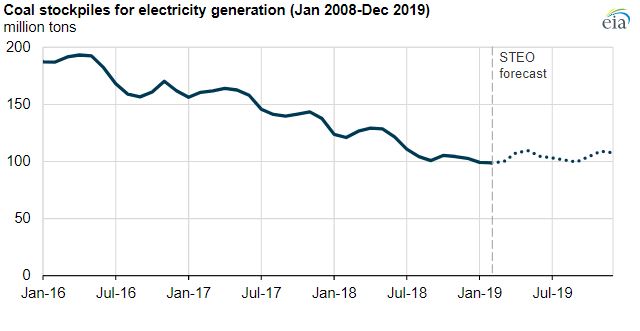