Commodity markets are stripping away the case for coal in Europe, moving quicker than government efforts to close the most polluting power plants.

A plunge in natural gas prices along with an increase in the cost of releasing carbon dioxide emissions shifted the profitability of generating electricity away from burning coal, according to data compiled by BloombergNEF. The trend is evident in Italy, Spain, Germany and the U.K., each of which have cut the proportion of coal in their power mixes this year.

Shifting economics in the power business are complementing the efforts of the European Union to slash greenhouse gases and make good on commitments in the Paris Agreement on climate change. It’s made utilities from RWE AG in Germany and Italy’s Enel SpA change their calculations about the pace the region will be able to reduce carbon pollution. 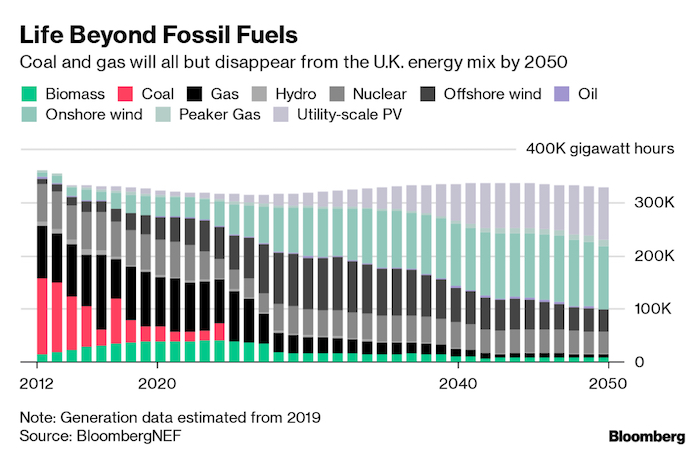 “It’s a magical alignment that’s igniting and accelerating a transition that, without the economics, would be much harder,” said Antonello Cammisecra, who is in charge of Enel’s gas, coal, oil and green power generation worldwide. “We have an alignment of economics, of saying switch to gas and most importantly switch to renewables because it’s cheaper, safer and easier.”

The shift in Europe is part of a global trend.

Abundant supplies of cheap gas are cutting in on coal’s market share in the U.S., where plants burning the dirtiest fossil fuel closed at near record rates last year. New export terminals are exporting cheap American gas worldwide, prompting countries across Asia, especially China and Pakistan, to buy LNG as an alternative to coal for power generation.

“The exit from coal is finally driven by the market,” said Claudia Kemfert, a professor of energy economics at the DIW research institute in Berlin. “The repair of emissions trading has worked.”

Coal output across Italy, France, Germany, Spain, Portugal and Britain fell 40% from a year ago in the second quarter, according to S&P Global Platts Analytics. The proportion of coal in the U.K. power mix has plummeted from more than 35% a decade ago to about 4% now, due in part to targets set by government to eliminate the fuel from electricity generation by 2025. 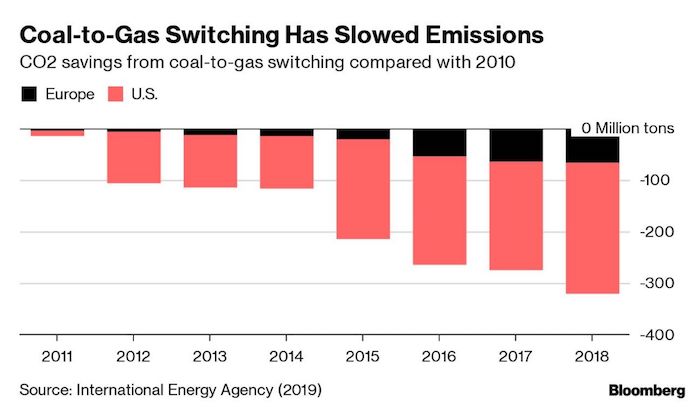 While the drop-off has been nowhere near as dramatic in other leading European economies, the phaseout is starting to take hold both because of policy moves and shifts in the market. Gas is trading near its weakest levels in a decade, and EU carbon allowances are double the price they were a year ago. The benchmark year-ahead coal contract has tumbled from $100 a ton to as little as $62 a ton.

The result is that the case for switching off coal plants in favor of gas has rarely been stronger. For almost all of this year, it has been far more profitable to switch on gas-fired generators and halt ones burning coal, according to BNEF. That marks the longest period that the cost of energy has remained in that “fuel-switching” territory.

On some short-term power contracts the margin for running gas plants has been as much as 14 euros a megawatt-hour more than coal this year. There’s evidence that some companies are responding.

“Now we see gas out-competing lignite plants in Germany on an economic basis, due to the increase in carbon prices,” said Jahn Olsen, an analyst at BNEF in London. “The reason for the carbon price even being there is for this kind of switch to happen. And now we are seeing it.”

In Germany, more fuel switching is happening this year than ever before. Gas accounted for 40% of power generation in June, the first time it had such a large proportion compared with coal, according to researcher Fraunhofer ISE. German coal power fell at a record rate in June, with lignite down 38% and hard coal by 41% from a year ago. Italy’s hard coal supply dropped by 19% in the first quarter, according to Eurostat data Spain’s coal use for power dropped to 6.7% in the first half while gas rose 17%, according to Red Electrica Corp.

Politicians are prodding for lower pollution. German Chancellor Angela Merkel’s administration in January brokered a plan to wean Europe’s biggest economy off coal from next year with a complete exit by 2038. While the plan isn’t yet enshrined in law, companies are already starting to move.

“Closing coal capacity is a theme that is developing momentum in Europe,” said Lueder Schumacher, a utilities analyst at Societe Generale SA in London. “Be it for environmental or economic reasons, coal just can’t compete at these carbon prices.” 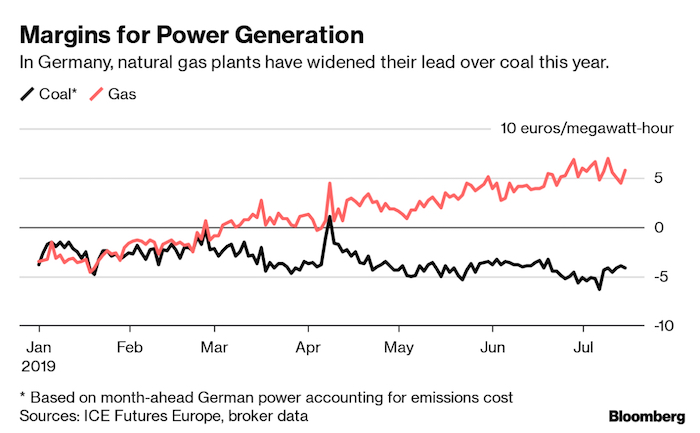 Part of the shift is due to an abundance of gas. New supplies of LNG are arriving from the U.S. and Australia after a mild winter left storage sites brimming. China’s thirst for the fuel has slowed, allowing more cargoes to arrive in Europe.The other major move is the surge in carbon prices, which raises the cost of running plants that pollute. Carbon has risen 66% in the past year and is closing in on the 30 euros-a-ton threshold that economists have said will start to have a major impact on the way businesses set their strategy. “When it comes to the carbon price, it has really taken a driver’s seat in the power price development,” Fortum Oyj CEO Pekka Lundmark said in a Bloomberg Television interview. “This is now starting to push through some well-needed coal-to-gas switching in power production and makes the power price more closely coupled to gas than coal.”

The trend toward fuel switching is yet to take hold in some places. Several countries in the east of Europe remain heavily reliant on coal for heat and power as well as jobs. Poland still gets more than 70% of its electricity from the fossil fuel, according to BloombergNEF data. Supply there rose by 5% from a year ago in the first quarter, Eurostat said.

Also, the same markets that make fuel switching attractive on paper may also delay a stronger reaction by companies.

Some big generators like RWE have hedged their exposure to carbon prices years into the future, allowing them to keep using coal profitably and avoid a knee-jerk adjustments based on short-term commodity price moves. RWE executives have said they expect gas switching to slow if price rises seen in forward markets materialize in the spot market.

For its part, the coal industry is hoping to stay relevant for as a long as it possibly can. It maintains that the most efficient, least-polluting coal plants are just as clean as some gas facilities. The World Coal Association wants to see broader deployment of carbon, capture and storage technology, which siphons off harmful gases for sequestration underground.

“Shutting down the best energy source that already exists for securing German power supply will not have any impact whatsoever on global climate,” the Coal Importers Association said in a July 18 statement. 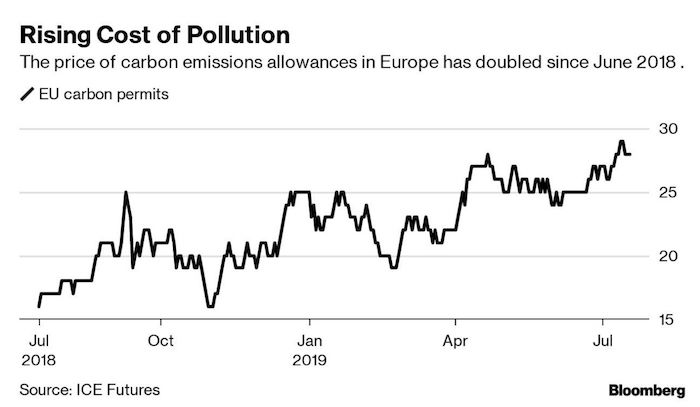 Even so, energy experts say moves to switch off coal and spur renewables are only the start of reducing net carbon emissions to zero by 2050, a goal proposed by a United Nations panel of scientists assessing the risks of climate change. DIW’s Kemfert said further policy action including a carbon tax may be necessary.

“A reform of energy taxes is already overdue,” she said. “Fossil energies have been taxed too little for a long time and electricity too highly. A further time delay of necessary measures is not possible, it must be acted fast.”
Source: Bloomberg