Colombia’s energy self-sufficiency and GDP at risk as reserves, production and investments plunge

Colombia, Latin America’s third-largest oil producer after Brazil and Mexico, is in danger of losing its energy self-sufficiency and a significant part of its gross domestic product (GDP) in the future, unless the pace of exploration accelerates, a Rystad Energy report has revealed. The country’s oil and gas output along with its total proven reserves tally are in decline, while investments will likely fail to recover to pre-Covid-19 pandemic levels this decade.

Crude oil production in Colombia this year is on track to hit its lowest level since 2009, currently averaging at just over 730,000 barrels per day (bpd), down from 754,000 bpd in 2020, which was already an 11-year low, Rystad Energy data shows. Amid a lack of discoveries, meanwhile, the country’s proven crude reserves as of the end of 2020 stood at 1.82 billion barrels, a three-year low and a far cry from the 2.45 billion barrels recorded in 2013 when the country was flexing its muscles against regional peers. 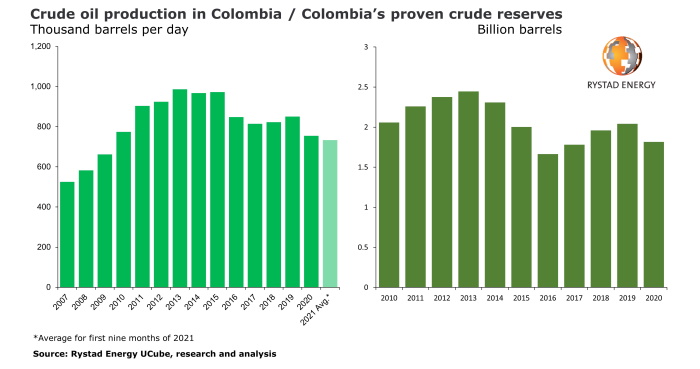 While natural gas output in Colombia has been largely flat since 2016, averaging just over 1.07 billion cubic feet per day so far this year – which is a 2.7% rise against 2020 – it is well below the highs of the previous decade. Its proven gas reserves, in contrast, have been on a continuous decline since 2012, ending 2020 at just 2.95 trillion cubic feet (Tcf), nearly half the 5.73 Tcf recorded in 2012.

Rystad Energy’s outlook shows that brownfield and greenfield investments on existing discoveries – despite a very marginal uptick expected in the next two years compared with this year’s five-year low of $2.3 billion – are set to drop to below $1.7 billion in both 2024 and 2025, the lowest level in Colombia’s modern oil and gas history. In the second part of the decade – and thanks to an expected mild growth in greenfield investments – the combined spending will rise slightly but never exceed last year’s $2.6 billion, let alone the pre-pandemic level of $3.7 billion in 2019.

“Colombia is in urgent need of additional investments and exploration success as proven resources have dwindled. It must double these resources in the next decade to continue to be energy self-sufficient. Although its exploration sector stayed dormant in recent years, there is some hope from wildcats following a recent acreage offering,” says Sofia Forestieri, upstream analyst at Rystad Energy.

Colombia’s hydrocarbon sector is a key revenue generator for the country’s economy, representing 12% of GDP. The industry has, however, struggled in the last few years with declining production and conflict zones being located in some of the territory’s most oil-rich regions, such as Catatumbo, which is estimated to hold 17 million barrels of unexplored oil reserves.

Some hope on the horizon

Exploration expenditure offshore Colombia, which reached over $600 million in 2015 and over $500 million in 2017, has plunged since then, only managing $145 million this year. Nevertheless, a mild uptick is expected, and in 2023 exploration spending is forecast to inch over $200 million for the first time in six years.

On the upside, 2021 numbers reflect rising industry interest in the country, with Shell’s farm-in at Ecopetrol’s Fuerte Sur, COL-5 and Purple Angel deepwater blocks in the Colombian Caribbean and Shell’s announcement of an appraisal drilling program for early 2022 offering hope. Apart from this, Anadarko Colombia – an Occidental Petroleum subsidiary – also has four new offshore exploration and production contracts in the La Guajira, Magdalena and Atlantico provinces, while Noble Energy plans to drill a wildcat in the COL-3 Block off La Guarija. Together, these projects could mark the revival of an area where activity was once thwarted because of high development costs.

Last but not least, a positive response to Colombia’s fourth round of the Permanent Process for the Assignment of Areas (PPAA), held on 1 December 2021, could provide much-needed impetus to the country’s dormant exploration sector. The auction saw 30 blocks of the 53 offered receive valid bids from seven participating companies, a significant uptick compared to the third round held last year. Additionally, the government secured over $148.5 million in initial investments. Any announcement of new finds within these blocks will not only help increase the country’s hydrocarbons production, thereby benefiting national revenue, it will also instill confidence among investors and could have a significant positive impact on any future bid rounds.
Source: Rystad Energy