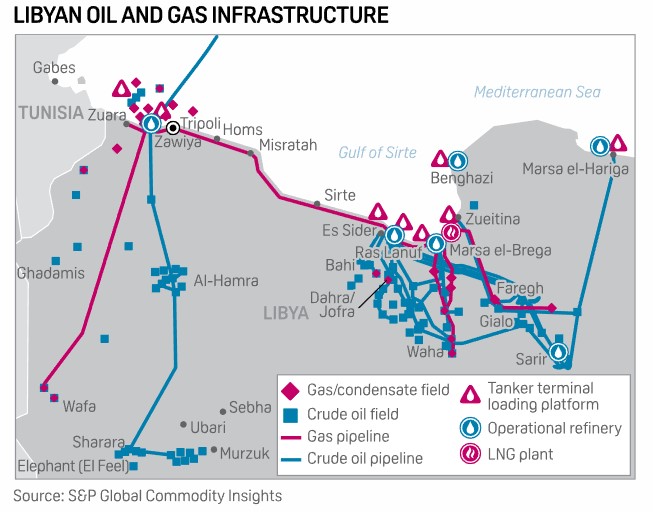 What’s happening? Libyan protests spread to three more crude export terminals on June 10, lowering supply to around 300,000 b/d from 680,000 b/d in May and 980,000 b/d in the first quarter (before blockades started in mid-April). Eastern general Khalifa Haftar’s forces appear to be behind the disruptions, in a possible attempt to increase leverage and push out interim PM Abdul Hamid Dbeibah before a UN roadmap expires on June 21.

What’s next? Tensions are expected to continue between rival governments, with their aligned militia using oil blockades to push for power and oil revenues. Haftar previously shut down 1 million b/d for nine months in 2020. Therefore, a sustained outage or continued volatility of Libyan supply this year would be unsurprising and is a key bullish risk for oil markets. 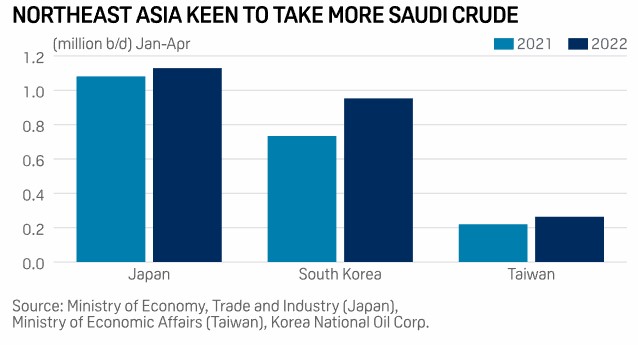 What’s happening? Following the decision by OPEC+ June 2 to raise production quotas by 648,000 b/d for July and another 648,000 b/d for August, refiners across Asia are wary of the possibility that a significant portion of the incremental Middle Eastern supply may go to end-users in Europe, leaving Asian customers at the back of the buying queue. 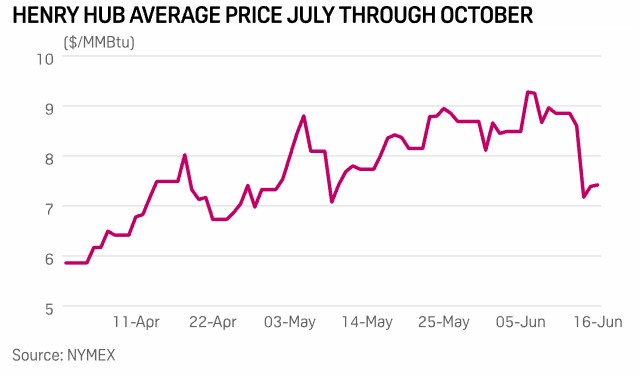 What’s happening? Freeport LNG experienced a fire on June 8 that shut down the facility and removing 2 Bcf/d of US LNG feedgas demand. Freeport LNG will be unable to return to full operation until late 2022, with partial service targeting a return in 90 days, or mid-September. Total US LNG feedgas has averaged 10.7 Bcf/d since the outage, down from 12.8 Bcf/d in the first week of June.
What’s next? The drop in LNG feedgas demand caused Henry Hub prices for the balance of the summer to steeply sell off. The lower feedgas demand this summer will allow for more supply to move into other fundamentals like rising power demand or storage injections, helping to narrow the 323 Bcf inventory deficit to the five-year average. 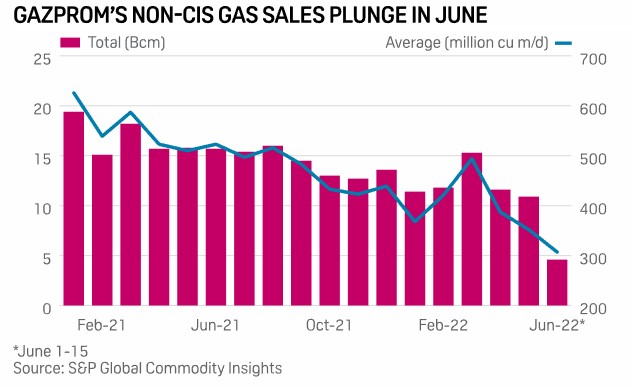 What’s happening? Gazprom’s gas sales in non-CIS countries plunged in the first half of June to an average of 307 million cu m/d after it cut off supplies to a number of European buyers over their refusal to comply with Moscow’s new ruble-based payment mechanism. Sales are now less than half of what they were just 18 months ago.

What’s next? Supplies from Gazprom are set to fall further in the second half of June after it cut deliveries via the Nord Stream pipeline to Germany to just 40% of capacity over maintenance issues at a key compressor station. Nord Stream—which runs under the Baltic Sea from Russia to Germany—had been the main channel for Russian gas to reach Europe, and it remains to be seen whether Gazprom will try to offset the lower volumes by increasing transit via Ukraine.

5. First signs of demand destruction in European power ahead of summer 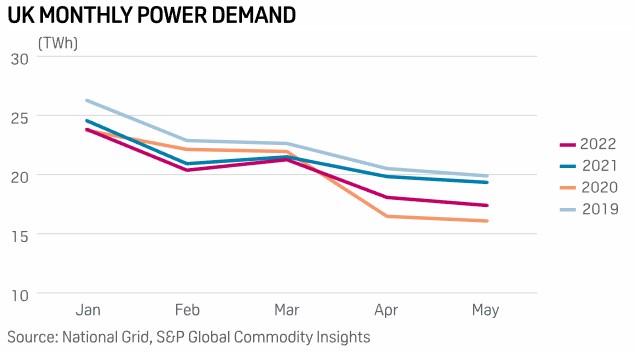 What’s happening: European electricity demand is slowing down. Consumption in Europe’s five biggest markets for the five months to the end of May was down 1.7% year on year, reflecting a milder spring but also rising consumer costs. UK demand has fallen the most, down 5% year on year, with a marked decline since April when default tariffs were hiked 54%, bringing average annual bills close to GBP2,000/year.

What’s next: The trend could be about to flip if summer heatwaves are prolonged, boosting air conditioning demand across Europe. Supply-side fundamentals are not helping. Inland, river-based power stations in Italy and France are already undergoing cooling restrictions. Twinned with poor nuclear availability and a fresh increase in gas feedstock prices, European power markets are in for a torrid time ahead of winter, when regulated bills are set to rise again.
Source: Platts