The rapid recovery of the global economy that started at the end of the first wave has come with a much faster rebound in global trade than initially expected. This has come with significant supply chain disruptions causing many different types of shortages that have plagued the manufacturing sector over the winter months. Longer supply lead times have been the result and input prices have jumped. So how long will the different disruptions last and what impact will they have on consumer prices?

Impact of shipping disruption on inflation will be sizeable this year

The rapid comeback of world trade has caused demand for shipping and containers to unexpectedly surge after the first wave of the coronavirus ended. With blank sailings – the cancelled sailings of freight ships – still elevated and with containers in high demand, input supply lead times have increased, inventories have fallen dramatically and freight rates soared towards the end of 2020. The Harpex shipping costs index suggests an increase of 200% since the start of the pandemic, around a quarter of which has taken place this year.

While we don’t expect the complete increase in freight rates to be passed through to the consumer, the supply chain disruptions are expected to have an upward effect on consumer prices, which will of course mainly be concentrated on the cost of imported goods. The impact thus far has been modest, as producer prices globally have only risen slightly and remain very weak by historical standards. 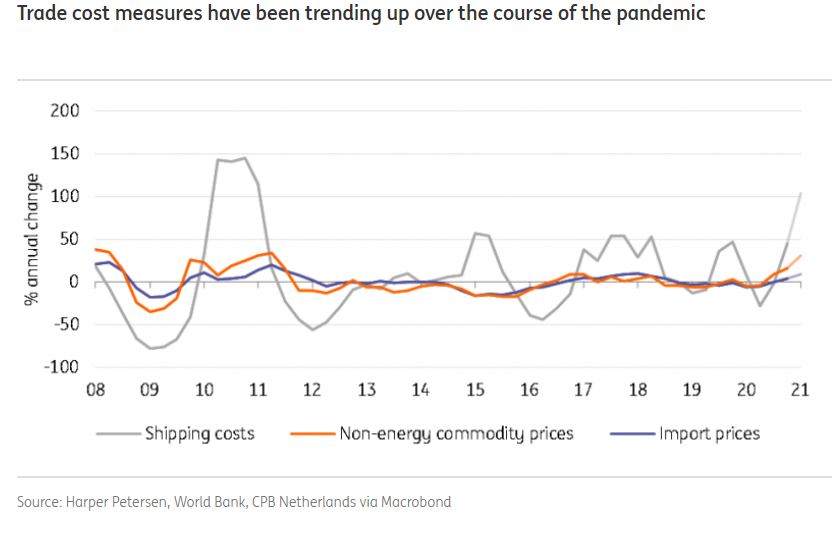 Looking at the import intensity of consumption and the pass-through of previous rises in transport costs to inflation in the US, UK and eurozone, we estimate that the impact of the shipping disruption and container shortages on inflation will be sizeable in these advanced economies, at roughly 0.3 to 0.4 percentage points.

We don’t think that the rise in shipping costs will be particularly short-lived but we do think the largest increase is behind us. As such, the impact on inflation will mainly be felt this year as rises are passed on along supply chains and eventually onto the consumer.

One of the key disruptions impacting consumer electronics and car manufacturing at the moment is the shortage of computer chips. In part due to the same issue that causes container demand to spike – the rapid recovery of demand for (semi-)durable goods – semiconductor demand increased rapidly over recent months. But demand is being supported by other longer-term factors, such as the rollout of 5G which is boosting demand for new mobile phones, and the electrification of vehicles increasing demand for computer chips.

Chip shortages have started to cause production disruptions, most notably in the auto industry. Due to just-in-time production, the auto industry had cancelled orders for chips during the first wave, resulting in chip production capacity shifting away from auto. The resulting production hiccups led to a decline in automotive output in January in the euro area. It is not just the car industry that has started to notice the impact though. Big console and mobile phone makers have experienced production cuts due to the shortages as well.

Given that there is a more structural component to the strong demand behind the semiconductor shortage, and that it takes time for new production capacity to be added, this supply problem is unlikely to be resolved anytime soon. We don’t expect significant relief before the second half of the year and even then it is unlikely to be the end of demand outpacing supply in this industry. The impact on inflation is hard to predict at the moment as semiconductor prices themselves have not spiked. Still, delayed supply could start to impact prices while demand continues to be high for consumer electronics and automobiles.

It’s not just semiconductors that are problematic in terms of availability. The surge in demand for goods during the pandemic, coupled with supply disruptions, has also caused shortages of other inputs. Think of raw materials like copper which have seen prices surge on the back of Covid-19 related supply disruptions over 2020 along with robust demand from China. Similarly, prices of agricultural commodities have been boosted by strong Chinese buying over much of the last year.

This is visible in non-energy commodity prices that have surged over the course of the pandemic towards annual increases that are the highest seen since 2011. This is starting to cause input prices to increase further for goods producers, and the prices of imported goods in the CPI will eventually reflect the steep rises on international markets.

Pass-through from import prices to consumer prices is typically gradual, as importers, wholesalers and retailers are insulated to an extent by contracts and hedging. There will also be an effort to absorb the rises within margins to retain competitiveness, though the scope to do so may be limited by other rising costs.

While the effects may show up gradually, the rise in raw materials prices which we’ve seen up to now imply sustained pressure on consumer prices. Given the different shares of imports within household consumption in the different countries, we expect the impact on inflation to be particularly strong in the eurozone and UK, with a slightly smaller impact in the US.

However, we think that further upside in non-energy commodity prices will likely be limited given that Covid-19 supply disruptions are easing, along with the expectation that the impressive post-Covid-19 commodities’ demand growth seen from China will likely slow.

The Suez Canal blockage has ended sooner than expected and traffic can now slowly restart again. This will have ripple effects on world trade as it will increase delays in an already stretched global supply chain and perhaps cause new bottlenecks at ports that do not have the capacity to host all incoming ships at once. Nevertheless, the impact should not be overdrawn and the impact on inflation will likely be negligible.

The pandemic shortages will push up inflation temporarily

The inflation impact of the supply chain ripples is definitely sizeable. In the US we’re estimating an impact of around 1 percentage point and in the eurozone and UK, it will be higher at around 1.5%. Most shortages and supply chain problems are still directly relatable to a halt in production during the first wave of the virus and the quick return of demand for goods.

The impact is therefore likely temporary but for a sustained period, partially lasting into 2022. Once supply and demand are more in sync again, elevated price pressures are set to fade. Still, the longer that upward pressure on imported goods prices persists, the greater the risk of second-round effects which could lead central banks to take action. For now, our base case remains that trade disruptions will not be acted upon by central banks.
Source: ING