The Covid-19 crisis has – and will continue to – hit the container shipping market hard, and the current economic situation provides no hope for a short-term recovery.

Demand drivers and freight rates
The coronavirus pandemic looks set to continue to hammer container shipping demand. While the lower demand that came when China shut down much of its manufacturing in February has passed, it was been replaced by a demand shock, as almost every other country entered their own forms of lockdown.

Laden container imports into the US West Coast already show the effects of the disruptions in China, with imports in February and March considerably down. On the other hand, the poor April results mostly reflect the lower demand from the US as it went into lockdown. In the first four months of the year imports are down by 12.5% and at their lowest level since 2014. 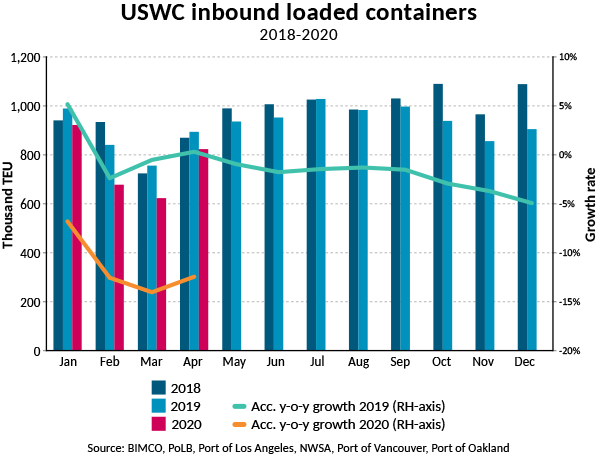 March retail sales figures show the extent to which demand has fallen – and with a host of blanked sailings already announced through to July, imports into these ports will not recover in the short term. A recovery in domestic consumption in the US is needed and, with businesses closing and millions losing their jobs, a full recovery to pre-coronavirus levels will take a long time.

Global container shipping volumes fell by 5.1% in the first quarter of the year compared with last year, with volumes down by 2.1m TEU at 38.2m TEU. The intra-Asian trade, a precursor for what will be exported from the region in coming months, was down by 13.1%, with lost volumes higher in March than February, despite China’s return to work. On the major lanes out of the Far East, exports to Europe were down 12.0% and exports to North America down by 9.4% in Q1.

The drop in demand for container shipping has not been fully registered by freight rates, because steep and fast-paced capacity adjustments have supported rates while hiding the real demand picture. The global Xeneta shipping index (XSI), an indication of the long-term rates for containers on major trades, continued its upwards trend in April, currently 2.9% higher than it was at the start of the year and 11% higher than it was in April 2019. 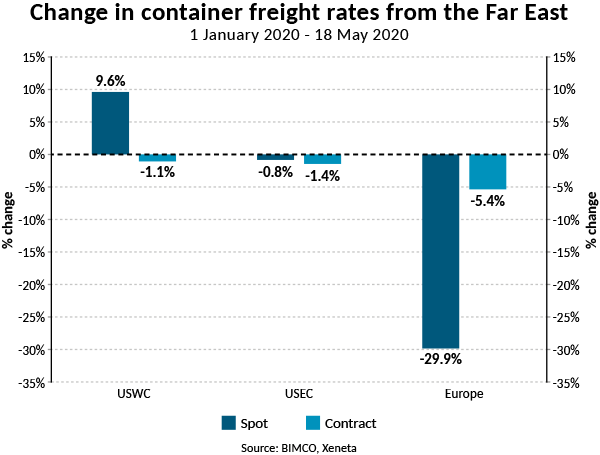 Maintaining some stability in freight rates has only been achieved by large capacity withdrawals from the market, with blanked sailings sending the idle container shipping fleet to record highs of 11.3%. Even when excluding ships that are having a scrubber retrofit, the idle fleet is record high. Despite this, not all rates have been able to remain elevated. While spot and contract rates from the Far East to the US have remained close to, or above, levels at the start of the year, those to Europe have fallen. Spot rates to Europe have dropped by 29.9% since the start of the year and contract rates by 5.4%. In fact, the fall in spot rates and underlying volumes was so steep that in April the average freight rate for sending a container from Europe to the Far East was higher than sending one from the Far East to Europe, a reversal of the usual fronthaul/backhaul trades on this route.

In these times, charter rates for container ships are a better gauge for the container shipping market than freight rates. The collapse in container shipping demand caused a jump in the number of ships available for charter, which sent charter rates – especially for the large vessel sizes – down. The daily hire for an 8,500 TEU vessel has fallen by 38% from the start of the year, from USD 30,000 per day to USD 18,500 on 15 May 2020, with rates likely to continue falling until higher cargo volumes return. Rates for a 6,500 TEU ship have fallen the most: down 42% since the start of the year, to USD 14,500 per day on 15 May. 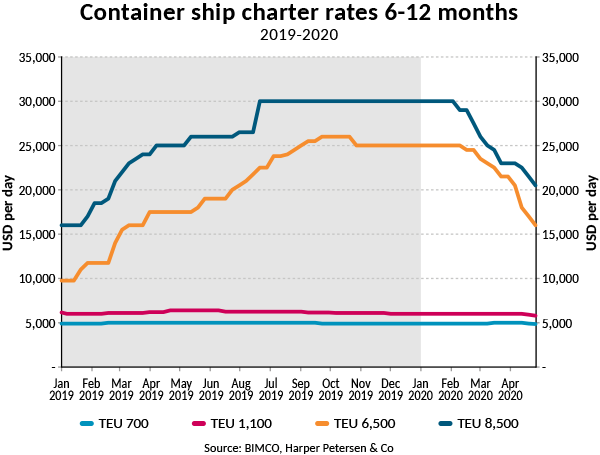 It is, particularly, the larger vessel sizes that have experienced steep drops in charter rates, as the main long-haul routes have had the most blanking of sailings. Unlike the falling demand for larger ship sizes, demand for smaller ships has remained more resilient, as carriers have looked to short-term contracts on these smaller vessel sizes to ease regional disruptions. Here, rates have only fallen by 4.1% and 6.7% for 700 TEU and 1,100 TEU ships respectively since the start of the year.

Fleet news
In what can only be defined as terrible timing, the record for the world’s largest container ship was broken in April, when a 23,964 TEU ship set sail for its first voyage. At 400m long and 24 rows across, the HMM Algeciras breaks the previous record of 23,756 TEU. It was the first in a series of 12 ships all with a capacity of either 23,000 or 23,964 TEU due to be delivered this year, adding 282,746 TEU to the market. The second ship, the 23,000 TEU HMM Oslo, was delivered in May.

Including these two new ultra-large container ships, 62,922 TEUs of new capacity entered the market in April, with the rest of the volumes made up of much smaller feeder ships. Year-to-date deliveries were down 57.6%, to 175,920 TEU, by 19 May compared with the same period last year.

Demolitions have also faced severe disruptions from the coronavirus crisis. The now-extended lockdown on the Indian subcontinent means ships scheduled for demolition are not being accepted at the facilities. Only two ships totalling 6,534 TEU was demolished in April. 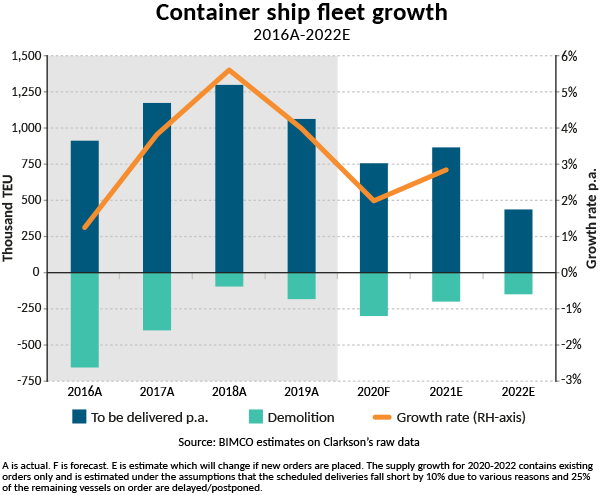 Outlook
The idle container ship fleet reached a new record in May, at 2.65m TEU, because of blanked sailings as a result of the shutdown of manufacturing in China in February. With demand now being severely affected, BIMCO expects the idle fleet to remain at around 10% for the rest of the year. The large idle fleet has, so far, been enough to support freight rates, temporarily hiding the losses for carriers. While savings are made by not sailing – with voyage costs and some operating costs avoided – the empty ships are still generating a loss on a daily basis, with some of the operating costs still present and financing costs unchanged, while not providing any income.

The recession and drop in consumer spending that this crisis has provoked will hit the container shipping industry hard, with no sudden bounce back in demand expected. Even under the WTO’s optimistic scenario, container shipping demand will fall by 10% in 2020.

The extent to which carriers will continue to blank sailings at the levels they have done up until now will be tested in the coming months. Each will seek to balance, on one side, keeping freight rates high and, on the other, increasing the use of their ships. 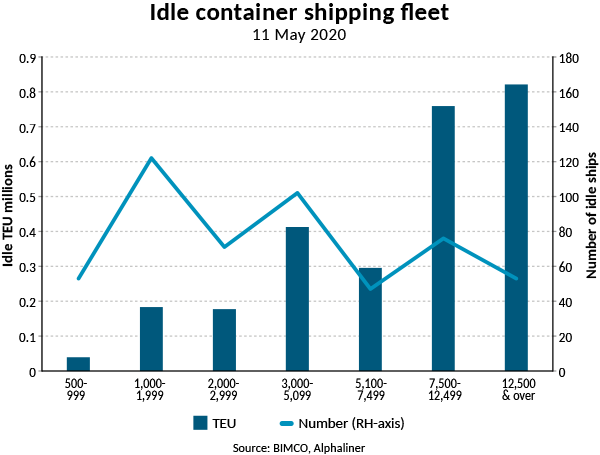 Container shipping demand will not rebound in the short term. Sales of containerised consumer goods have been some of the hardest hit by lockdown measures, and lower consumer spending power because of this crisis is likely to persist for a prolonged period.

BIMCO expects that, much like on the Far East to Europe route, spot rates and contract rates will fall in the coming months, with average earnings for the year at loss-making levels.

In particular, the ultra-large container ships delivered in recent years face a big challenge. Their size means many of them can only be deployed on the Far East to Europe route, and with demand here falling, the ships will have nowhere to go. The jump in idle fleet also shows that cascading to other routes in present market conditions is not an option, as demand has evaporated across the board. In the charter market, the biggest losers in the short term are those who charter their ships on short-term contracts.

One positive factor that carriers can lean on in these otherwise dark times is the lower bunker price – resulting from the collapse in oil prices – reducing voyage costs. In some cases, the combination of lower shipping demand and bunker fuel prices has led carriers to sail around the Cape of Good Hope, avoiding the cost of transiting the Suez Canal (which can be upwards of USD 600,000 for a one way trip for a ULCS) and soaking up some more capacity by extending sailing times. On record, 20 ships have done that trip in the year to date.
Source: Peter Sand, BIMCO