Home / Shipping News / International Shipping News / Container Shipping: Pressure Remains Despite Some Of The Trade War Damage Being Offset By A Reshuffling Of Manufacturing In Asia

Container Shipping: Pressure Remains Despite Some Of The Trade War Damage Being Offset By A Reshuffling Of Manufacturing In Asia

With fleet growth of 3.7%, compared to global container shipping demand growth of only 1%, even blanked sailings have been unable to lift freight rates.

Container shipping has in the last few months felt the effects of the trade war digging in, as global container volumes continue to see very sluggish growth, now standing at 1% in the first nine months of the year. This brings the total volume of containers shipped this year to 126.3 million TEU, up just 1.3 million from the corresponding level in 2018. All this compares with the 3.8% growth at this time last year, or an additional 4.6 million TEUs. 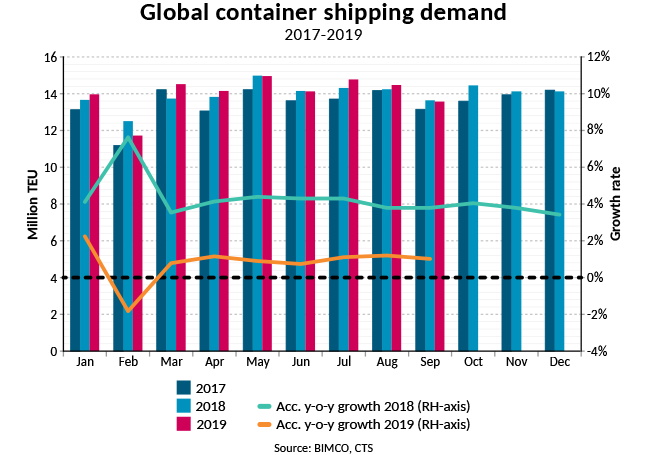 Frontloading at the end of last year, ahead of planned tariffs hikes on US imports from China, led to higher volumes as well as higher freight rates. Since February, volumes between the two countries have been consistently lower than last year. US containerised imports from China in tonnes are down 7.3% in the first nine months of the year.

Despite the fall in volumes from China, total containerised imports out of Asia have grown so far this year, albeit only just. Volumes are up 1.1%, compared to full year growth of 6.5% in 2018. 2018 growth was pulled up at the end of the year due to the frontloading.

In particular, volumes to the USWC have suffered, where laden container imports are down 1.5% in the first nine months of the year, according to BIMCO’s own data. Exports have also fallen by 4.2%. 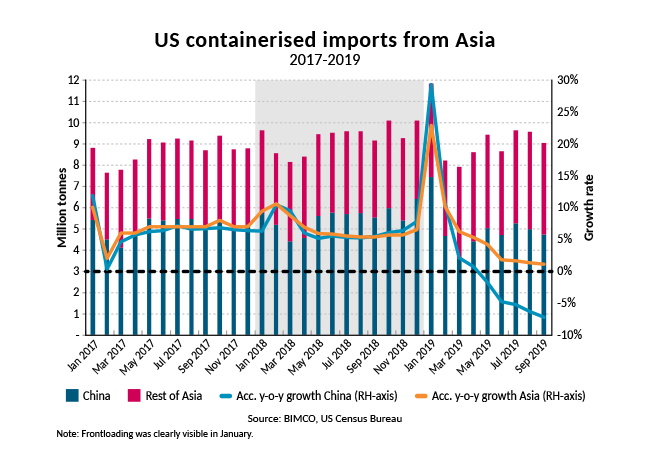 The continued, albeit modest, growth in US imports from the whole of Asia reflects a reshuffling of exporting nations that has occurred in the Far East. This has manifested itself in two ways:

• First, the trade war and added tariffs on goods from China has speeded up the process – which had already begun – of some manufacturing moving away from China in favour of its neighbours with lower labour costs.
• Second, the trade war has led to products, still being produced in China, being transhipped through neighbouring countries to change their country of origin and thereby avoid additional tariffs when they arrive in the US.

Despite these developments, volumes on intra-Asian trades year are flat in the first nine months of 2019 compared to the same period in 2018 . The boost that could have been expected from shifting manufacturing and transhipment has not come to the shipping industry, which instead is feeling the pressure from slowing overall exports from the region. This may be because transhipped volumes are primarily being transported by land from China into neighbouring countries before being put on a ship.

Intra-Asian volumes provide an insight into how volumes out of Asia will develop, with lower volumes already putting pressure on freight rates on the major routes. The overall CCFI fell to its lowest level of the year with a reading of 776.9 on 18 October 2019, although by 8 November it had risen to 808.93.The sub-indexes covering Europe, as well as both the East and West US coasts, where the usual peak season has failed to materialise, have performed particulary poorly. 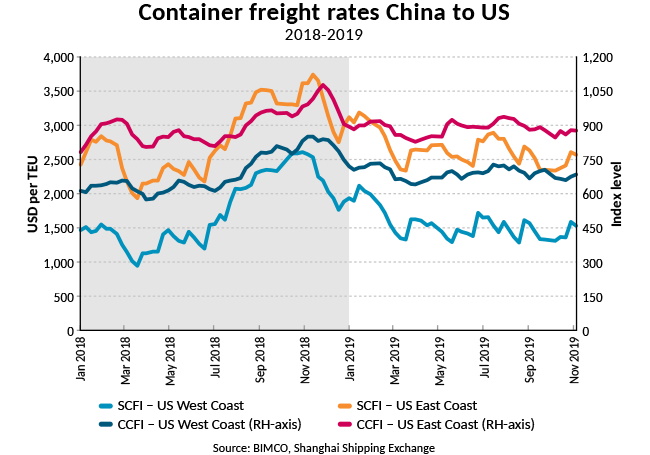 On these routes, both the CCFI and SCFI are down from where they were at the same time last year, when they were buoyed by the frontloading ahead of the tariffs. As evidenced by the falling inventory/sales ratio in the US (see macroeconomics section), retailers there have not been stockpiling to the same extent as they usually do in the lead-up to the Christmas period, causing volumes and freight rates to disappoint.

Despite slowing growth and lower freight rates, charter rates for container ships, especially the largest vessel sizes, remain elevated. This is partly due to these larger ships leaving the market for scrubber retrofits. Rates for an 8,500 TEU vessel have been standing at USD 30,000 per day for the past 11 weeks. This is a sign of weakness, as it indicates that demand has stalled; BIMCO expects to see lower charter rates in the coming months. Charter rates for a 6,500 TEU vessel, after five weeks at USD 26,000 per day, have already fallen slightly, standing at USD 25,000 per day on 8 November 2019. Charter rates for smaller vessel sizes remain more subdued.

Fleet growth in container shipping has also slowed in recent years, although not as fast as the slowdown in global container shipping demand, meaning that the fundamental balance of the market has continued to worsen, to the detriment of freight rates and shipowners operating in this sector.

Growth in the container shipping segment now stands at 3.6%, and BIMCO expects full-year growth of 3.7%. 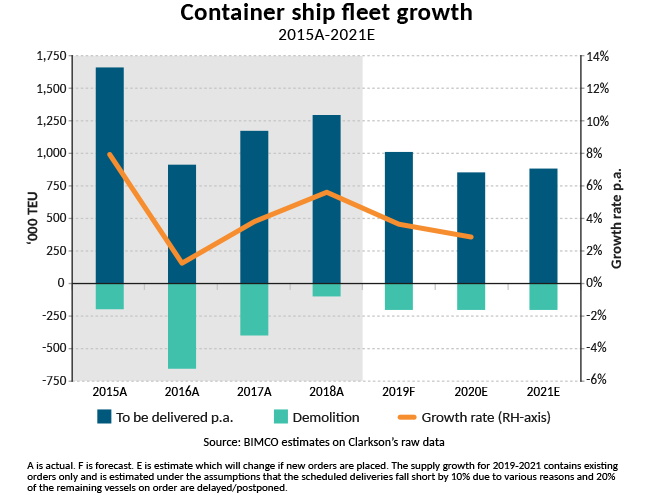 At the end of 2018, BIMCO forecast 100,000 TEU would be demolished in 2019, although it said that figure could double if, as has been the case, slowing demand and low freight rates materialised. Demolitions this year currently stand at 163,219 TEU.

Taking into account deliveries of 964,064 TEU, it brings the total containership fleet to 22.9 million TEU. Of the vessels delivered this year, 27 have a capacity above 14,500 TEU and, added together, these Ultra Large Container Ships (ULCSs) accounted for 544,202 TEU of the total delivered, or just over 56%.

There are only a few trades able to handle ULCSs and, as they arrive on the market, cascading will lead to large ships finding their way to many of the world’s other trades, the majority of which have no need for larger ships or extra capacity, putting further pressure on freight rates.

Carriers have announced further blanking of sailings (pulling a ship out of rotation) in November which, along with ships heading to yards for scrubber retrofitting amongst other things, has pushed the idle fleet up in all ship sizes in recent weeks. However, despite the continued blanking of sailings, freight rates have not risen substantially as the fundamental balance has continued to deteriorate. This will only hurt carriers, especially as they face the final preparations before the implementation of the 2020 sulphur cap and the battle to pass on higher fuel costs to customers.

Although volumes being shipped between the Far East and Europe have remained high – up 4.6% from the same period of 2018 – this has done little to lift freight rates. The CCFI index to Europe in October was 10.5% lower in 2019 than in 2018 and, over the same period, the SCFI was down 17.1%. The continued deployment of bigger ships, as well as the overall market conditions, mean that even high demand growth on a route cannot single-handedly lift rates on that route. 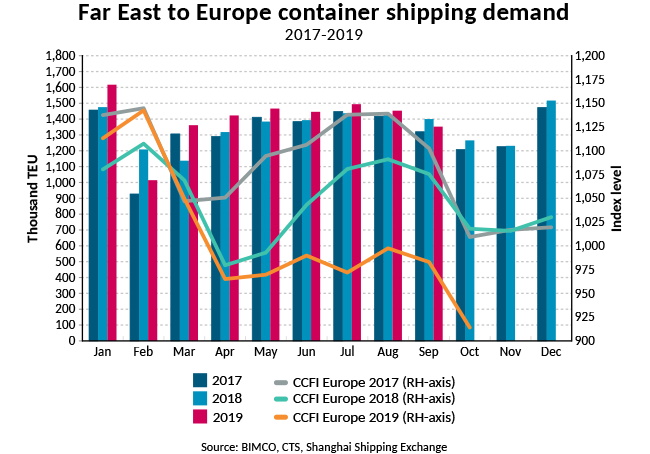 While bunker adjustment factors (BAFs) have long been around, carriers have developed new formulae to calculate them, and their ability to pass on these extra costs will depend on the conditions of the market. Shippers want the lowest possible price and, as long as the market fundamentals are on their side, they will be unwilling to pay extra, even if these costs are disguised as BAFs. Around 50% of the ULCS fleet is now expected to have a scrubber installed by the end of 2020, up from 34% by the end of 2019 (source: Clarksons), with carriers preferring the upfront costs rather than prolonged higher costs of fuel.

Carriers, competing in a commoditised market, will probably be willing to undercut each other if it means they can sail with more containers onboard. Because of this, cost-cutting will continue to be a focus as fuel costs rise.

The slowdown in demand is showing no signs of easing, and should the latest round of tariffs be implemented on 15 December as planned, virtually all US imports from China will be subject to tariffs, all of which will only cause further harm to the shipping industry at the same time as costs are increasing due to the IMO 2020 sulphur cap.A continued reshuffling in manufacturing in Asia may offer some upside, once processes are up and running. But, as BIMCO has previously said, there are no winners in a trade war, and this is already being felt across the board by shipping in 2019.

The new year will bring not only the sulphur cap, but also skewed exports caused by the Chinese New Year. Pushing out goods ahead of widespread factory closures may bring a boost in January before a slow, and possibly painful, February awaits carriers.
Source: Peter Sand, Chief Shipping Analyst, BIMCO

Demolition Market Off to a Good 2020 Start

How decarbonizing shipping could unlock a global energy transition