Containers in a storm

Since land-based storm events frequently are most severe at the shoreline, it is unsurprising that containers become caught up in the ensuing damage. Let’s look at some of the risks.

Storm events, of course, arrive in various guises and will display characteristics particular to the season or location. Typically, there will be two immediate risks: high winds (including unpredictable gusts and water surface surges) and precipitation. The latter may well exceed the established drainage or channelling capabilities, which, combined with storm surges, can lead to severe flooding. Precipitation has in recent months resulted in records tumbling – values during the tragic flooding around Durban, South Africa, during April 2022 have increased typically twofold and at one weather station by more than four times (from a previous record set just last year).

Typically, there will be two immediate risks: high winds (including unpredictable gusts and water surface surges) and precipitation

The ferocity and impact of storm events around the globe, arising at any time of the year, in some instances defying forecasters, predictably is increasing awareness overall of the risks. In part, this awareness is fuelled by the ease with which images of the ensuing damage can now be shared, together with an inevitable curiosity in capturing things that look out of the ordinary. And while those involved will already be acutely aware, stacks of boxes collapsed like dominoes or units floating in flood channels draw attention globally. 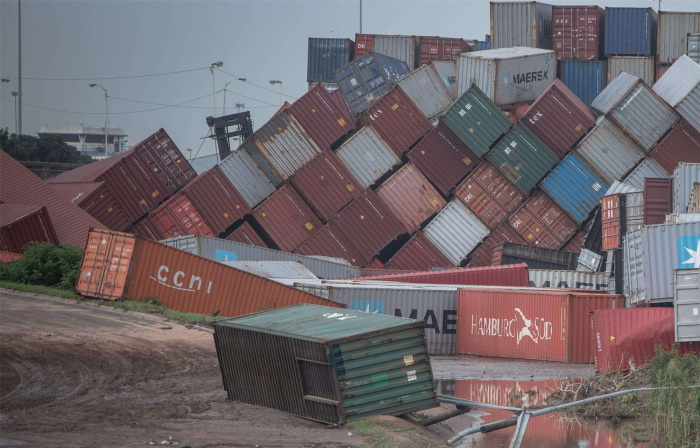 The common perception may be that an empty container – weighing two to three tonnes – cannot easily be dislodged, but the reality is rather different. The sides of the units provide an ideal ‘sail area’ for high wind impact; storage will generally have no interconnectors between tiers vertically and the options to tie down or secure stacks are often seen as challenging for depot or terminal yard operations. Even simple solutions such as offered by Windbreaker International, entrant to the 2019 TT Club Innovation in Safety Award, take considerable time to achieve widespread adoption.

Inevitably, the method of stacking of empty (and laden) units can mitigate the risk of collapse or dislodging. There may be additional operational measures taken when a storm is forecast, but generally lower wider stacks will reduce vulnerability and minimise the need for emergency re-stacking as a storm approaches. Equally, aligning the longitudinal axes of the containers with the predominant wind direction is sound practice; it may be that this is less considered for depot planning, while port infrastructure developments should actively take into account such risks.

Further, techniques such as ‘pyramiding’ or stepping the stacks can reduce the risks and provide some protection for adjacent assets. In some instances, it may be possible to stack heavy laden units on top of empties, which may have the added benefit of protecting cargo from flood water.

When containers become dislodged or an entire stack is toppled, it may be anticipated that the units themselves will suffer varying degrees of damage. Each will need to be thoroughly inspected to ensure that appropriate repairs are undertaken prior to return to service. Of course, the units may be damaged from both their own movement and from other wind-borne debris. Taking remedial action after the storm may require careful planning to ensure the safety of personnel, as well as avoiding further damage to the units and cargo – and the handling equipment deployed.

Temperature controlled containers necessarily have the additional vulnerability of the reefer machinery, both to physical damage and operational integrity. Plans may be established in advance (or in the emergency) to secure alternative power supply and restore or maintain continuity of power to operating units.

However, this may be further complicated where floodwater impacts the reefer stacks, both in relation to power supplies and also penetration of water into the units’ insulation. Where the machinery of temperature controlled units has been affected by flood water, steps will be required to dry the electrical systems and protect machinery parts from developing corrosion.

Severe storm events will, with certainty, lead to more widespread damage beyond the terminal or depot boundaries. The recent experience in Durban resulted in substantial damage to infrastructure – road and rail damage, including bridges, as well as power and communications outage – together with tragic loss of life. As a consequence, local authorities will have varying priorities that may impact the ability of any particular business to recover. That aside, access to flooded or damaged facilities to tidy up the mess left after the storm, receive and dispatch cargo or containers, and generally restore operations safely may carry complexity.

Ports and terminals should be familiar with the requirement to establish and test emergency plans; this applies equally to all depot operations. Importantly, emergency plans need to be compiled in liaison with local authorities and emergency agencies, but also take account of risks presented by or to neighbouring facilities, and, at least potentially, customer or supplier commitments.

Ports and terminals should be familiar with the requirement to establish and test emergency plans; this applies equally to all depot operations