Containership Orderbook: Not Just A One Horse Race

This year has seen a further shake up in the profile of the containership orderbook. A decline in ordering in the larger boxship sector has been a major driving factor, most notably causing a significant reduction in the size of the South Korean orderbook. This month’s Shipbuilding Focus takes a closer look at the range of factors impacting the structure of the containership orderbook today. 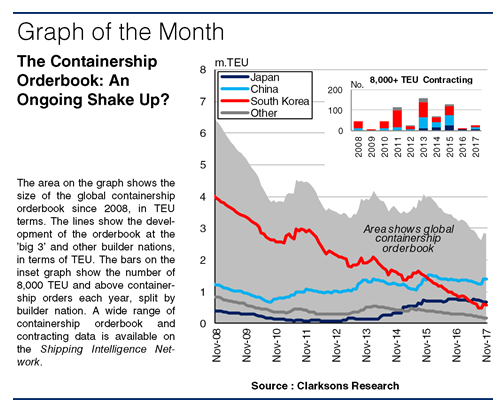 Traditionally, Korean yards have led boxship sector contracting, taking 49% of global orders in TEU terms from 2008 to 2016, notably receiving 56% of 8,000+ TEU orders in TEU terms in the same period. With the recent slowdown in containership ordering, especially in the 8,000+ TEU sector, the Korean boxship orderbook has shrunk to 0.6m TEU as of the start of November, down 31% since October 2015 in TEU terms. As a result, in May, the Korean boxship orderbook for the first time on record became smaller in size than that of both Chinese and Japanese builders, whose orderbooks stood at 1.4m TEU and 0.6m TEU as of the start of November respectively. Although this shake up has primarily been driven by a decline in larger boxship ordering, Chinese yards have also had an impact by competing in the 8,000+ TEU sector, having taken 36% of orders in 2017 so far, in numerical terms, up from only 18% in full year 2008. Additionally, Chinese yards still dominate sub-3,000 TEU boxship contracting, and have increased their share of orders from 54% in 2008 to 72% in 2017 so far in numerical terms.

Taking A Step Up

The Japanese boxship orderbook increased from c.66,000 TEU in 2013 to 0.7m TEU in 2016 due to domestic orders in the 8,000+ TEU sector in 2014 and 2015, particularly at Imabari, which won 70% of these orders in numerical terms. Whilst the capacity to build bigger units is developed, boxship deliveries have been limited, averaging 0.1m TEU per year in 2015-16 and causing the Japanese boxship orderbook to remain relatively steady in size since 2015. In contrast, deliveries from Korean yards have been consistently high, averaging 0.7m TEU per year from 2015-16.

Overall, the decline in size of the Korean boxship orderbook has been the key driver behind the changing profile at a global level. Meanwhile, further competition has arisen in the 8,000+ TEU sector, where Chinese yards have increased their share of orders. Given the recent limited appetite, a significant new dynamic in big boxship ordering will be needed to generate a significant shake up the profile of the containership orderbook once again.
Source: Clarksons