The port of Rotterdam handled 112.4 million tonnes of freight during the third quarter of 2019. This means a total of 353.5 million tonnes has been transhipped up to the end of the third quarter. Compared with the previous year, this represents a 1% increase in cargo handling. Volume growth was mainly driven by containers, crude oil, LNG and biomass. There was a reduction in the transhipment of coal and mineral oil products.

Allard Castelein, Port of Rotterdam Authority CEO: ‘In the third quarter we again saw healthy growth in terms of containers, one of the Port Authority’s strategic spearheads. What is worrying, however, is that the relationship between the world’s major trading blocs remains strained, as does the continuing uncertainty about the introduction of trade tariffs after Brexit.’ 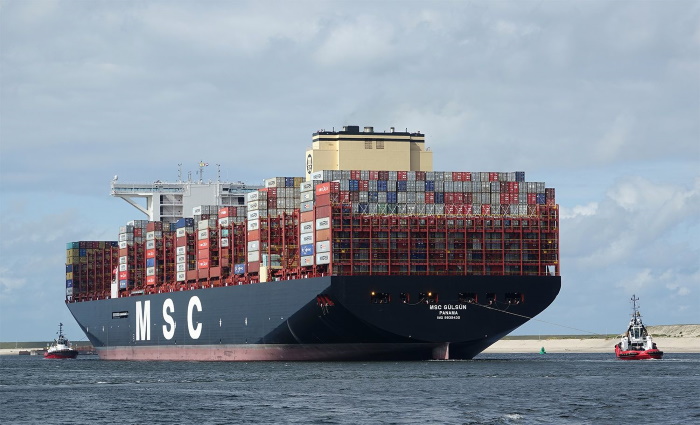 MSC Gülsün, world’s largest container ship. The vessel, 400 metres long and with a beam of 62 metres, has a 23,756-TEU (twenty-foot standard containers) capacity. MSC Gülsün is the first container ship capable of transporting 24 containers side by side across the breadth of its hull. Photo: Kees Torn.

Dry bulk
A total of 55.9 million tonnes of dry bulk was transhipped up to the end of the third quarter. That is a fall of 1.4% compared to last year.
Iron ore transhipment grew by 2% to the end of the third quarter. This growth mainly took place during the first six months of the year. The faltering economy in Germany has led to less transhipment in recent months. Steel companies were hesitant about replenishing stocks. The main reason for this is the downturn in car production. Transhipment of energy coal fell sharply after a strong start in 2019, caused by the low price of coal at the time. This downturn was due to the sharply declining share of coal and lignite in German power generation and due to maintenance work at the Maasvlakte power stations. Biomass continued to grow strongly (+84%) as a result of increased co-firing in coal-fired power stations. Transhipment of agricultural bulk remained virtually unchanged from last year.

Liquid bulk
By the end of the third quarter, the transhipment of liquid bulk totalled 159.5 million tonnes. This was almost equal to last year’s volume.
The transhipment of crude oil was above last year’s level in all three quarters, an increase of 2.8%. There was more supply because the refineries in Rotterdam and Antwerp – which are supplied through Rotterdam – increased production after the investments made in plants over recent years.
The mineral oil products segment showed a downturn of more than 10%. This is the result of greatly reduced global trade in fuel oil, a trend that has been ongoing for a number of years. Within the mineral oil products sector, a slight increase could be seen in the transhipment of other fuels, such as diesel.
LNG continued to grow strongly. The increase up to and including the third quarter amounted to 46% due to higher European consumption of gas produced in the Atlantic region. Previously, this gas was often sold in Asia.
In the remaining liquid bulk category, more than 11% more was handled to the end of the third quarter. This rise was predominantly attributable to biofuels.

Containers and break bulk
Up to and including the third quarter, the transhipment of containers was 3.3% higher in terms of tonnes than it had been in the previous year (3.8% measured in TEUs). This growth mainly took place during the first six months of the year, levelling off in the third quarter. This was caused by an overall slowdown in the growth of global trade and a fall in short sea volume of freight being shipped to the Eastern Mediterranean.
Other breakbulk grew by 4.4% up to the end of the third quarter. There was an increase across the breadth of several traditional markets, such as aluminium, steel and paper, but heavy cargo and special projects such as hulls for inland vessels also resulted in more tonnes.
Roll on Roll off (RoRo) charted an erratic course that was strongly influenced by a possible Brexit. In the run-up to the initial Brexit date, a lot of additional stocks were piled up during the first quarter. After the postponement of Brexit to 31 October, volumes then decreased in the period April-August. In September, we saw some growth again. The expectation is that this growth will continue to pick up in October in the run-up to the new Brexit date.

2019-10-22
hellenicshippingnews..
Previous: Sovcomflot advances green shipping along the Northern Sea Route
Next: ABB to bring autonomous technology to the Port of Singapore