Copper remains in a twilight zone

Copper may still be stuck in a twilight zone for a while, waiting for strong catalysts. After hitting a peak of US$10,460/t in early May this year, the red metal has since been range-bound between US$9,000/t to US$10,000/t. With the subject of “to taper or not to taper” dominating, along with reflation trades subsiding, prices have been confined to the lower part of the range over the last three months.

Copper prices appear to be looking for a breakout after the Jackson Hole symposium whereby the narrative has changed to a delay in Fed tapering. Meanwhile, the huge miss from last week’s US non-farm payroll data just further fueled the pro-risk mood, and copper rallied amid a weaker dollar. Now there seems to be a “snooze button” that is allowing more time for inflation to entrench and intensify, but the question is whether there could be a conviction among bulls to boost their bullish views further. Money managers have been unwinding their longs in COMEX, and the net long position has retreated from the recent cycle peak in late October last year of 91.6k lots, to 31.6k lots at the end of August. 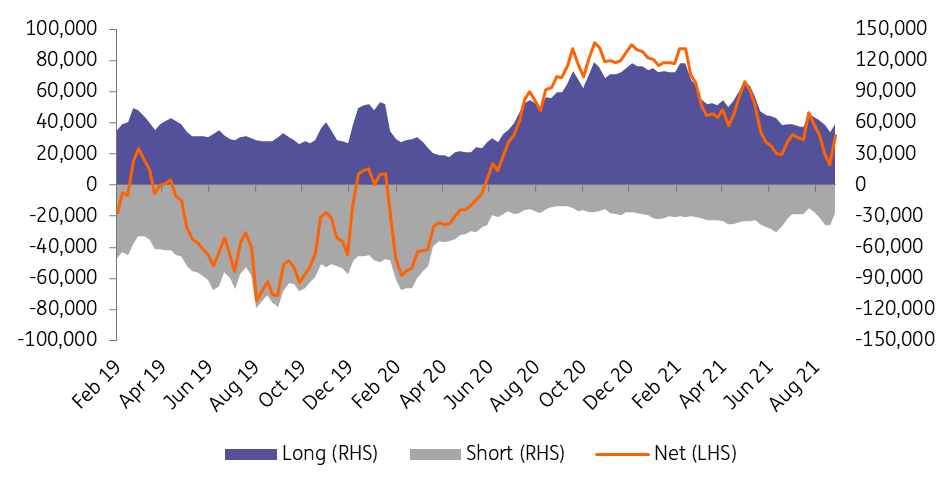 The microeconomic positivity since August has mainly stemmed from China market dynamics. Arbitrage activity that reacts to the relative momentum between onshore and offshore markets has resulted in the ebb and flows of stocks in Chinese bonded warehouses, a reservoir to store copper when arbitrage is unfavourable or vice versa. During August, a strong rally in the Yangshan premium heralded a big inflow of copper into the onshore market, and the steady decline of bonded stocks validates this trend. The trade data to be released later this week will tell us the size of copper inflows during August. These dynamics have sparked optimism towards China demand. But some in the market may find this contradictory to the recent macro data out of China. However, we think this was more of a supply-driven story due to disrupted scrap supply failing to contribute to the overall copper supply jigsaw. Hence, consumers were diverted to purchase copper cathode, which led to a sharp decline in onshore stocks, adding to the bullish momentum in the Shanghai market and prompting arbitrage.

The real demand pick-up remains to be seen. However, September and October usually see stronger metals demand from the China market (also called the ‘golden season’). This compounded with exceptional low stocks may pose some upside risk in the short term, should further physical indicators validate the demand narrative.

A below multi-year low in stocks supportive in the short-term, assuming seasonal demand pick-up 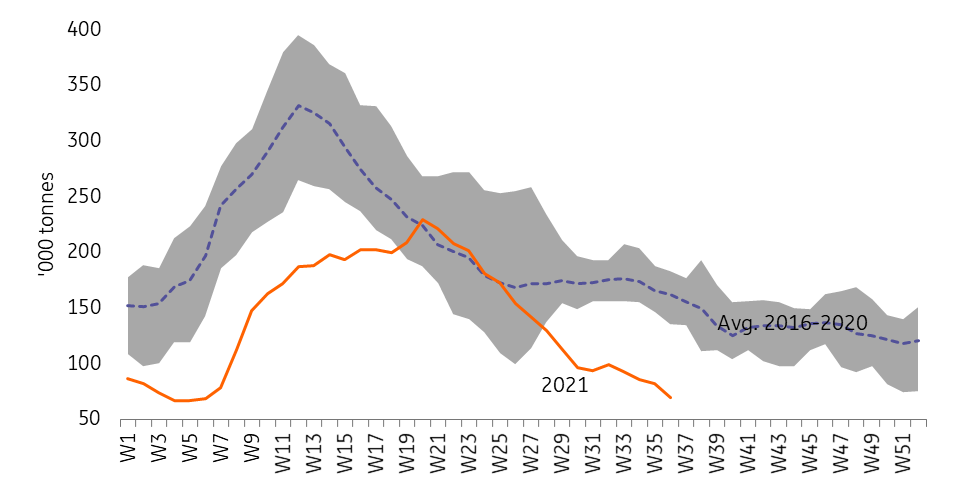 However, any upside flare may not be sustainable as Fed tapering is approaching, and our economists think November looks like a decent date for an announcement. On the anticipated tapering side, we think current copper prices have not fully priced in the risks ahead. Meanwhile, the red metal could still turn to the east to find some support from China, as China is looking to stabilise credit growth for the remainder of the year. Should China accelerate special purpose bond issuances and divert additional funds into more copper-intensive projects, that may help to limit downside.
Source: ING