This report is part of the S&P Global Commodity Insights’ Metals Trade Review series, where we dig through datasets and digest some of the key trends in iron ore, metallurgical coal, copper, alumina, and steel and scrap. We also explore what the next few months could bring, from supply and demand shifts, to new arbitrages, and to quality spread fluctuations.

Asian demand for copper concentrates will likely be supported in the third quarter by healthy margins and an increase in smelter production capacity in China, while clean copper concentrate output is expected to lag consumption, placing downward pressure on the country’s treatment and refining charges.

Major Chinese producer Yanggu Xiangguang Copper, with 500,000 mt/year capacity, resumed production in second-half May and was running at 90% of capacity in June, while a number of other Chinese smelters restarted production in June after seasonal maintenance.

On the supply side, water shortages and deteriorating ore grades impacted copper production in Chile in the first half of the year, resulting in the country’s copper concentrate exports falling 13% year on year over January-May.

Strikes in Peru impacted production at MMG’s Las Bambas mine and Southern Copper’ Cuajone and Toquepala mines. As a result, some term contracts could not be delivered to buyers in Q2, and both traders and smelters were observed restocking clean copper concentrates due to shipment delays or the cancellation of planned term cargoes. 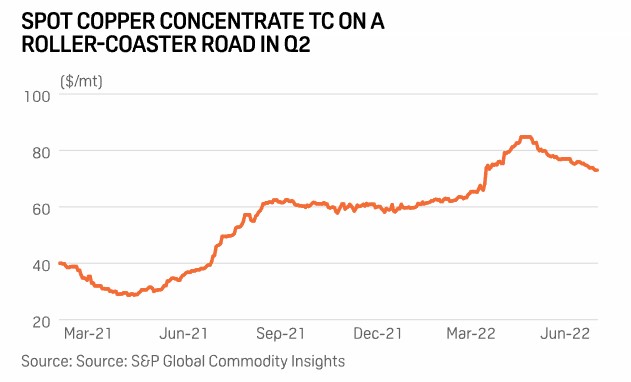 Although anticipated new copper supply, such as from Peru’s Quelleveco mine, could bring some relief to the market, its first shipment has been delayed to August-September due to production difficulties from an initial target of July.

Trader-smelter bid spread widens
The limited availability of clean copper concentrate since Xiangguang resumed production in May has prompted traders to bid more aggressively in the spot market.

Recovering short physical positions to deliver term contracts, and securing clean concentrates to sell together with blended or non-standard copper concentrates, have resulted in widening spreads between smelter and trader transaction levels.

The Platts producer-trader differential was assessed at minus $14.60/mt June 29, the widest to date in 2022.

Traders were more active in the spot market in Q2, with 33% of spot trades observed to have been concluded by traders over April-June, up from 25% over January-March. 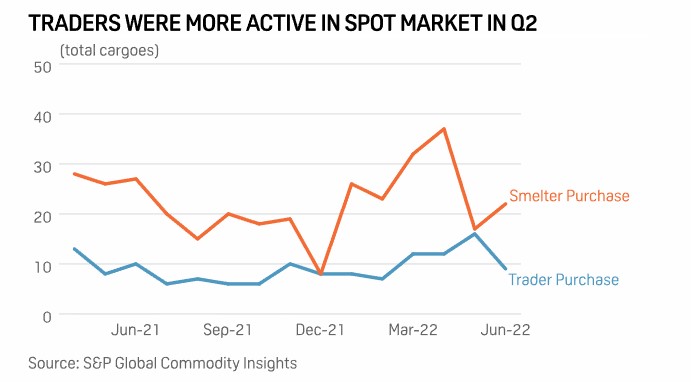 In addition, Mongolian-origin copper concentrates were heard sold to non-traditional buyers in south China in Q2, while Grassberg concentrate with 700 ppm fluorine content was sold to Chinese smelters. Kamoa concentrates from the Democratic Republic of Congo were also purchased by some Chinese smelters in the spot market due to Las Bambas shipment delays.

Smelters generally prefer to buy standard clean copper concentrates when supply is abundant, as the cost to remove impurities can be higher than the TC charge, a smelter source said.

Industrial demand recovery critical
Copper cathode spot liquidity, meanwhile, may still see downward pressure in Q3 despite Shanghai having lifted its lockdown restrictions, as lower copper consumption has also been observed in the West amid a gloomy global macroeconomic outlook.

As central banks raised interest rates in a bid to tame inflation following the Russia-Ukraine conflict, copper prices on the LME started to decline, falling below $9,000/mt in June. Combined with the lifting of lockdown measures in Shanghai, the import arbitrage finally opened in May, improving spot liquidity.

While lower copper prices typically boost downstream consumption, market participants were not optimistic about global copper consumption in the second half of the year.

Rising interest rates and high inflation will dampen copper consumption by the construction and home appliances sectors in the US and Europe, sources said.

Demand recovery in China was also unclear during the period, as indicators for the automotive and property sectors, both major consumers of copper, contracted in Q2. This caused Shanghai futures Exchange copper prices to fall below Yuan 70,000/mt June 17, resulting in more hesitancy among buyers.

However, as a strong dollar and weak overseas demand continue to pressure LME copper prices, traders remain hopeful trading activity will pick up in Q3 on the back of stimulus packages rolled out in China to boost consumption.
Source: Platts