Gasum’s liquefied natural gas (LNG) bunker vessel, Coralius, made its 100th bunkering on February21. Coralius is operating on behalf of Gasum (former Skangas) and the vessel mainly operates in the North Sea and the Skagerrak area.

The LNG bunker vessel Coralius celebrated a milestone at the end of February, as she completed her 100th bunkering operation in just 18 months. Coralius delivers LNG through ship-to-ship bunkering at sea and in port. This has significantly increased Gasum’s flexibility and responsiveness to vessels that require LNG but are unable to visit a terminal or a port. By making LNG more accessible to vessels, ship-to-ship bunkering also boosts efficiency. 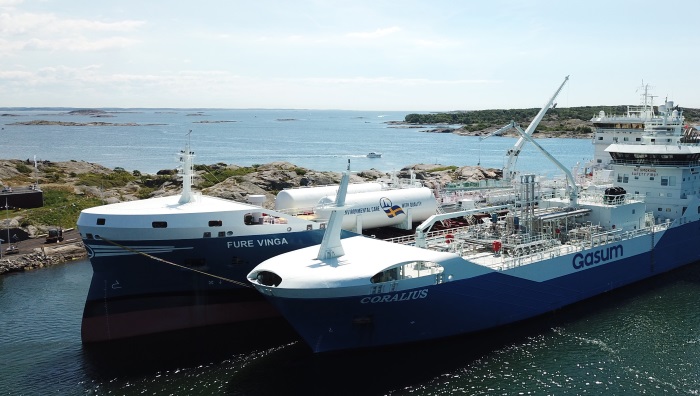 “100 ship-to-ship bunkerings is a great milestone for Gasum as well as for our customers. With Coralius, we have been able to perform bunkering to different types of vessels, which is quite unique and demands us to be prepared for all types of vessels. The bunkering operations are swift and safe, and we have received great feedback from our customers. Coralius has definitely increased Gasum’s flexibility as an LNG supplier,” says Kimmo Rahkamo, Vice President, natural gas and LNG, Gasum.

LNG marine fuel meets all current SOx (sulphur oxides) and planned NOx (nitrogen oxides) requirements. It eliminates particles and can reduce CO2 emissions by at least 20% compared to traditional fuels. LNG is suitable for all vessel types and it contributes significantly to a greener shipping environment.

Coralius was built by the Royal Bodewes in the Netherlands and is the first European built LNG bunker and distribution vessel. It is equipped with state-of-the-art LNG transfer equipment for bunkering and has a cargo capacity of 5,800 m3.
Source: Gasum