Cruise industry was expected to reach 32 million passengers in 2020 globally, comparatively with 30 million passengers on the previous year. More passengers, bigger cruise lines. But then the forecasts have been negatively overtaken by Covid-19 pandemic, following the social distancing measures and travel restrictions.

Cruise industry was the travel sector, which has been particularly badly hit and nearly devastated. Most of the Cruise Lines have decided to lay their ships at anchor, selling or scraping the older ones. Their revenues were nearly zero for months, so they have adopted the above measures in order to save costs. Aliaga, ship recycling port in Izmir, Turkey, was already stripping five cruise ships from the UK, Italy and US by June 2020.

Another sign of Covid-19 negative impact on cruise industry, was the decision of Carnival Cruise Lines to remove 13 ships from its fleet on July 10th. With further announcement on July 23th, Carnival has made known that two Fantasy Class ships had been sold, while another two were placed in long-term layup. 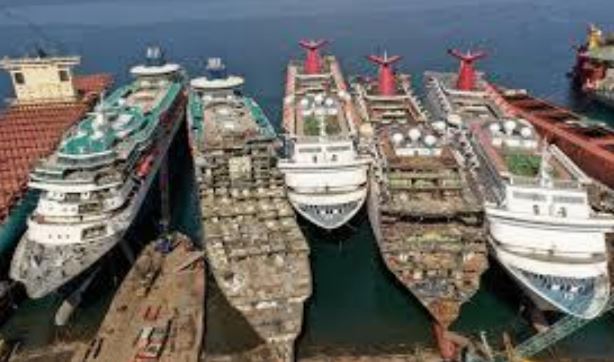 Except for cruise ships owners and operators, Covid-19 pandemic has drastically affected large regions and especially islands, whose main revenue was based on travel & tourism activities. The above statement is confirmed from the fact that, Greek islands have faced a significant loss of their revenues in 2020, as regards to cruise industry contribution. According to a research by the Bank of Greece for the travel balance of payments, our country received €5,8 million from cruise travelers in 2020, when the corresponding number was respectively €498,9 million for the previous year. So, we observe a decline of -98,8%. Even though the cruise sector had a significant performance in 2019 and a promising future in 2020, the Covid-19 pandemic led to a significant drop on cruise ship arrivals and passengers visiting Greek ports, as a result of the strict travel restrictions.

The statistics of the above table were issued from a comparative study of the number of arrivals and cruise passengers in 43 Greek ports for the years 2019 – 2020, in an effort to reflect the impact of COVID-19 on the Greek cruise. The number of cruise ships calls was 3899 in 2019, while the respective number in 2020 was only 202. Covid19 pandemic caused a significant drop in cruise calls, causing a negative variation of  -94.82% between 2019-2020. Piraeus, the biggest port of Greece and among the largest Mediterranean ports, faced a major hit, as it accommodated 546 cruise calls less in 2020 comparatively with 2019. Smaller ports, such as Nafplion, Agios Nicolaos, Samos, Githio, Lavrio, Preveza etc, recorded zero cruise calls in 2020, a catastrophic event for the income of the above referred local communities.

In the same context, the effect of COVID-19 was negative on the number of cruise passengers, who visited Greek ports, as it was decreased by 5.473.600 passengers. As it can been seen from the figures in the table above, 2019 was a year, in which cruise had a positive sign in terms of traffic in the 43 Greek ports, as it welcomed 5,537,600 passengers. On the other hand, this number decreased significantly in 2020, as the outbreak of the virus and consequently the constant travel restrictions, hindered the further development of the cruise industry, due to its massive nature. During the few cruises that were allowed mainly from September 2020 onwards, the number of passengers, who visited the 43 Greek ports, were calculated around 64,356. According to above data, there was a negative variation in percentage of – 98.84% between 2019- 2020. 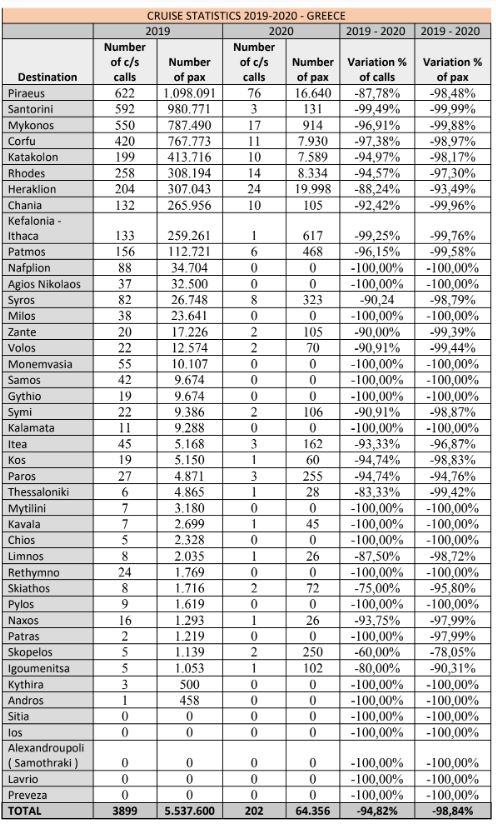 The future of cruising in Greece depends on many factors. A special role is played by the rate of vaccination of the Greek population in the upcoming months, with a view to a reduction in the number of positive cases and an increased immunity. The strategical agreements that the Greek state will enter into with other countries in order to create safe travel routes, are of great importance. The Greek state has already held talks with Israel and the United Kingdom regarding the opening of tourism through the possession of a vaccination certificate by travelers. Mr. Theoxaris, Minister of Tourism, has announced the opening of tourism on MAY 14, 2021. The strategy of promoting and attracting visitors revolved around the phrase ‘’All we want is Greece’’ and the message that Greece is a safe destination.

In conclusion, cruise resumption may be possible through a combination of negative PCR test, vaccination certificate and the emergency plan of cruise companies as regards to Covid-19 outbreaks during a call. Cruise companies should adopt a policy against Coronovirus, should define safe ports, enter into agreements with Greek ports and ensure interoperability of their own policy with the rules set by each port.