Coronavirus: the economic recovery won’t only be U-shaped – it’ll look like a wheelbarrow

• The world economy is expected to bounce back from a severe, yet short, impact following the coronavirus pandemic.
• Before the outbreak, stock indices were hitting new highs, and unemployment was at its lowest in over half a century.
The economic effects of the coronavirus crisis will be severe but short-lived, according to much of the recent commentary. The cautious revival in stock markets points in the same direction, while recent polling suggests that 75% of business people share this view. Most of them expect economic activity to rebound this year.

The rationale is that the economy before the coronavirus was in great shape. Stock indices were hitting new highs, with the Dow Jones average flirting with 30,000 in early February (it’s now around 22,500). The US unemployment rate was 3.5% in February, a level not seen for over 50 years. If the economy is fundamentally sound, the reasoning goes, the worldwide lockdowns are merely hitting a pause button for a short time.

We hope that this optimism is correct, but the economic recovery will most likely be long and slow. We are talking U-shaped at best – and probably more like a wheelbarrow than a wok.

Even with massive government interventions such as the US$2 trillion (£1.6 trillion) stimulus package in America, businesses and markets will take longer to recover than people might think. There are likely to be many bankruptcies. Businesses continue to operate during a bankruptcy reorganisation, but it severely limits their ability to plan, react to market changes, hire employees, or just have any of the flexibility that is essential to succeed.

The average bankruptcy takes 260 days to work out. During that period, businesses will have a hard time rebuilding. Management will be distracted, while most employees will be thinking about getting more secure employment. And even companies that don’t need bankruptcy protection will need time to rebuild credit facilities, rehire personnel and re-establish customer relationships.

Now consider the complexity of the global supply chain. More than 90% of Fortune 1,000 companies have at least one tier-2 (secondary) supplier in Hubei, the Chinese province around Wuhan. Fewer than one in five of these companies have a tier-1 supplier in the region, but one failed link can disrupt the whole chain. The link can be replaced, but it takes time. While this happens, businesses up and down the supply chain have to cool their heels.

There were also pre-crisis weaknesses in the world economy that will now be even harder for the sunken economic system to handle. While the average ratio of stock prices to corporate earnings was not bad pre-crisis considering the level of interest rates, most of the juice was in FAANG (Facebook, Apple, Amazon, Netflix and Google) and Microsoft. These tech goliaths account for around one-fifth of the total value of the S&P 500.

More disturbingly, 40% of all US corporate debt was rated BBB, just above junk, going into the crisis, while only 30% of the world’s outstanding stock of non-financial corporate bonds were rated A or above. A huge name like Kraft Heinz was downgraded to junk in mid-February, meaning it is considered high-risk and will pay higher borrowing rates on its debt. Historically, about 5% of BBB bonds are downgraded to junk each year. In the current crisis, expect a lot more. 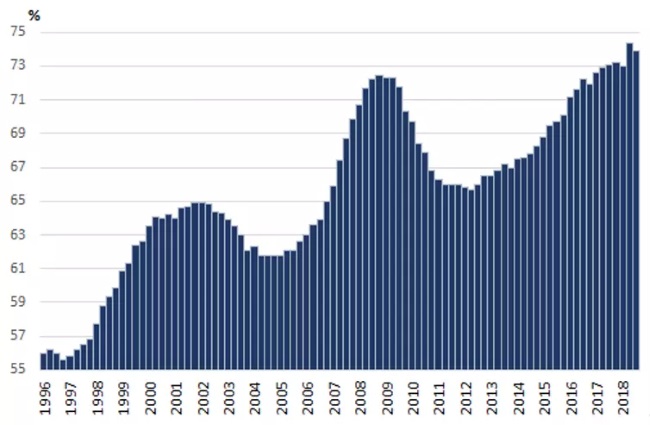 Despite central bank interest-rate cuts, borrowing costs for companies are now rising dramatically. With further downgrades from credit ratings agencies all but guaranteed, especially with many big earnings announcements due after Easter, some companies will lose access to credit altogether. Moody’s estimates that the default rate for junk-rated companies could hit an astounding 10%, compared to a historical average of 4%.

The old saying goes, hope for the best but prepare for the worst. A wheelbarrow is our most likely scenario that businesses and governments should prepare for – a long, drawn-out bottom and a slow, upward recovery – but even this assumes that the coronavirus restrictions are fully lifted in the next few months.

In reality, they might not be. There is lots of talk about herd immunity, but it’s not yet clear the degree to which immunity is developed by infected people who survive. Authorities may be reluctant to completely loosen controls, given how much we don’t about the coronavirus.

As for the race to develop a vaccine, flu vaccines are relatively ineffective. They reduce your risk of becoming ill by 40% to 60%, compared to 97% for measles vaccines and 88% for mumps. We could easily end up in a situation where a COVID-19 vaccine solves part of the problem but doesn’t erase the need for some restrictions. Lockdowns might end, while other measures like social distancing, limits on gatherings and travel restrictions continue – perhaps on a seasonal basis.

South Korea could be a glimpse into the future. It has so far avoided an Italian-style health crisis without a lockdown, but has still imposed various restrictions on the economy. It has postponed the spring school semester and has advised people to work remotely, avoid crowds and meetings, and wear masks.

Should this become the new semi-normal, the restaurant industry could generally disappear. Few restaurants can afford to operate at half-capacity at best. The live entertainment industry could go the same way, as would multiplexes. South Korea’s cinemas have experienced a 90% decline in attendances, for example.

Stadium sports are another obvious victim, and don’t be certain that TV subscriptions will make up the shortfall: the roar of the crowd has always been part of the attraction for viewers in bars and living rooms.

Perhaps more consequential is the potential impact on factories, warehouses and knowledge workers. There are at least hopeful signs that knowledge workers in everything from design to clinical research to law might be more productive outside the office. But will factories and warehouses need to be converted into the equivalent of clean or semi-clean rooms? Estimates for such a conversion run from US$100 to US$1,000 per square foot, which amounts to a considerable overall cost to the economy.

These are some of the things to bear in mind when commentators talk optimistically about where the world economy will be heading in the coming months. No one wants to sound alarmist, but it is better to start reflecting on these possibilities rather than being caught unawares further down the line.
Source: World Economic Forum