China’s and Australia’s trade tensions, which have led to disruptions in the ever so important for the dry bulk market, coal trade, could potentially lead to more long-haul charters. For example, Canada is the seventh largest exporter of coal in the world. In calendar 2019 the country exported a total of 58.7 mln tonnes of coal by sea, according to Refinitiv vessel tracking data. Canada is also the world’s fourth largest exporter of metallurgical coal, after Australia, the United States and Russia. Nearly half of the coal produced in Canada is thermal and half is metallurgical. Canada’s exports are primarily metallurgical coal. Alberta and British Columbia produced 85% of Canada’s coal. 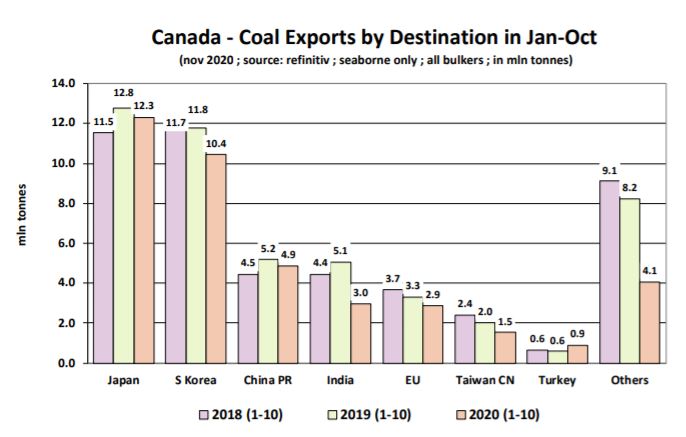 According to shipbroker Banchero Costa, “Canada exports about half of its coal production. Given the location of its mining resources, the overwhelming majority of Canadian coal exports are shipped from ports in British Columbia, on the Pacific coast. Of the 58.7 mln tonnes shipped in calendar 2019, 55.2% (32.4 mln tonnes) were shipped from Roberts Bank, 19.6% (11.5 mln tonnes) from Vancouver, and 18.7% (11.0 mln tonnes) from Prince Rupert. Just 6.2% of exports (3.7 mln tonnes) were shipped from Quebec on the Atlantic coast. The vast majority of Canada’s coal exports go to Asia, which is still a significant consumer. Canada does also import coal, but this is primarily due to logistic constraints. The 2.1 mln tonnes of coal imported in calendar 2019 were entirely delivered to the Atlantic coast, into New Brunswick and Nova Scotia. These imports are all sourced from Colombia and the USA”. 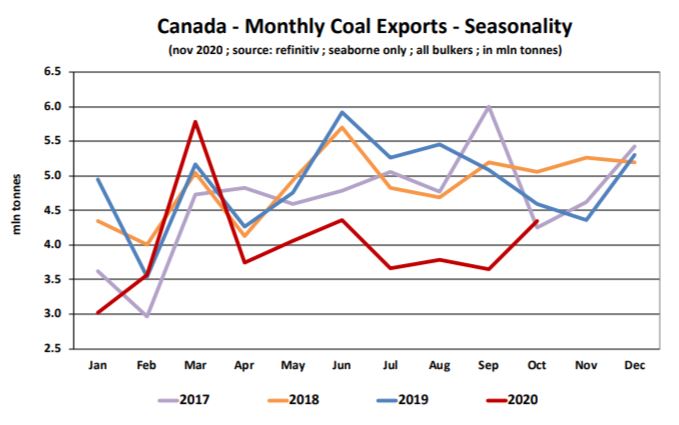 Banchero Costa added that “Canadian coal exports have been growing moderately in recent years, but have seen a sharp slowdown this year. In the first 10 months of 2020, Canada exported 40.0 mln tonnes of coal by sea, according to vessel tracking data from Refinitiv. This represents a sharp decline of -18.4% y-o-y, compared to the 49.0 mln tonnes exported in the same ten-month period of 2019. Things got progressively worse throughout the year. The first quarter of 2020 was already bad, with Canada exporting 12.4 mln tonnes of seaborne coal, which was a -9.5% decline on the same period last year”. 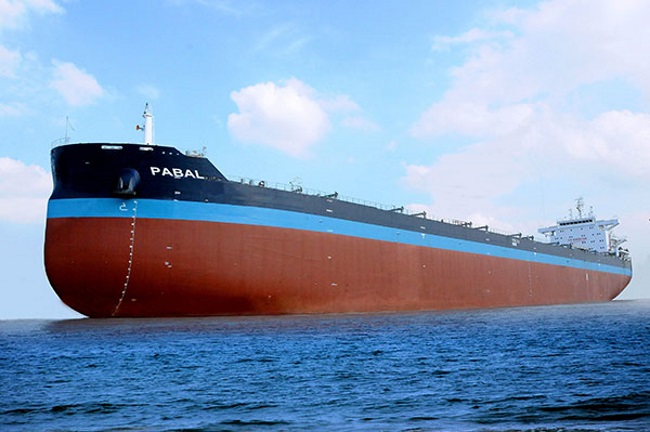 “The second quarter of 2020 was worse, as global demand evaporated on lockdowns and economic recession. In the period April-June 2020, seaborne coal exports from Canada declined by -18.6% year-on-year to 12.2 mln tonnes. Things were even more disappointing in the third quarter. In the Jul-Sep period, Canada exported 11.1 mln tonnes of coal, which was -29.8% decline from the 15.8 mln tonnes exported in the same quarter last year. The largest drop in exports in the first 10 months of this year was to India, down -41.4% y-o-y to just 3.0 mln tonnes. On the other hand, shipments to Japan were down just -3.6% y-o-y to 12.3 mln tonnes. Japan remains the top destination for Canadian coal, accounting for 31% of all Canadian coal shipments. Shipments to South Korea were down -11.6% y-o-y to 10.4 mln t. Exports to Mainland China are down -5.8% y-o-y to 4.9 mln t. To Taiwan down -25.3% y-o-y to 1.5 mln tonnes. Shipments to the European Union were down -13.1% y-o-y to 2.9 mln tonnes”, the shipbroker concluded.
Nikos Roussanoglou, Hellenic Shipping News Worldwide

Previous: MARKET SNAPSHOT FOR 08/12/2020
Next: China in no rush to tighten policy despite quickening recovery: former stats official