Could US Crude Oil Exports Provide a Boost to the Tanker Market?

The tanker market has suffered of late and doesn’t seem to be able to capitalize on this year’s seasonal demand in the Northern Hemisphere as usual. As such, could other trades like US crude oil exports, offer some sort of support to the freight market? In a recent weekly report, shipbroker Banchero Costa said that “crude oil exports from the United States surged spectacularly in recent years thanks to the shale revolution, but are now slowing down quite a bit. In the first 10 months of 2020, the USA exported 118.6 mln tonnes of crude oil by sea, excluding domestic cabotage, according to vessel tracking data from Refinitiv. This represents a net increase of +13.5% y-o-y compared to the 104.5 mln tonnes exported in the same period of 2019”.

According to Banchero Costa, “this can be considered as a very good result in the current circumstances, what not with the Covid-19 pandemic, lockdowns in numerous countries, global economic recession, a global oil glut, and low oil prices. However, we all started the year with much higher targets. Last year, US exports increased by +47.2% y-o-y in the same period, and two years ago the growth in exports was +109.9% y-o-y. The first quarter of 2020 started more or less as we expected it to, with the United States exporting 37.1 mln tonnes of seaborne crude oil (excluding cabotage), which was still a strong +28.1% increase on the same period last year”. 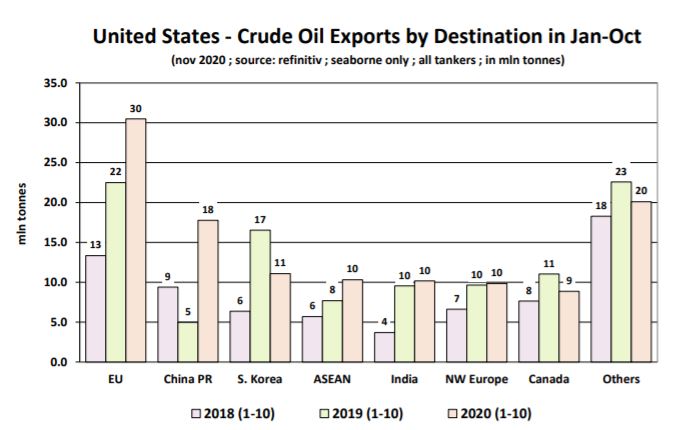 “However, the second quarter of 2020 proved to be much more negative, with oil prices in freefall and demand from Europe and Asia evaporating. In the period April-June 2020, seaborne crude oil exports from the USA declined by -9.7% quarterto-quarter to 33.5 mln tonnes. This was still a +5.8% y-o-y increase from the same period last year. Things were somewhat better in the third quarter. In the JulySeptember period, the USA exported 36.3 mln tonnes of crude oil, which was +18.1% more than in the same quarter last year. We are not particularly optimistic about the final quarter, which last year was the strongest of the year. It already started badly, with exports in October 2020 at 11.7 mln tonnes, down -10.8% y-o-y from the same month last year. In terms of trading patterns, we have seen two main bright spots for US oil exports this year: Continental Europe and China. Exports from the USA to the European Union surged by +35.6% year-on-year in the first 10 months of 2020 to 30.5 mln tonnes. This can frankly only be explained by geopolitical considerations, as it comes on a background of dwindling oil demand in Europe”, the shipbroker noted. 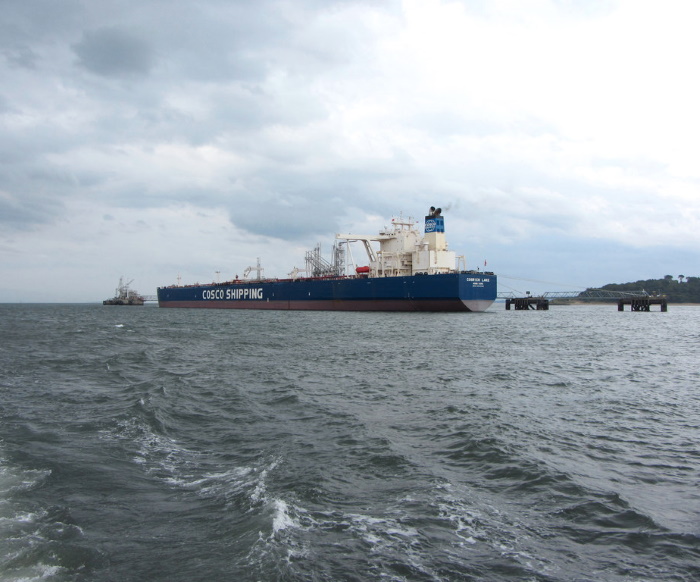 Banchero Costa added that “in fact, total EU seaborne imports of crude oil unsurprisingly declined by -12.5% y-o-y so far this year, with imports from Russia down by -14.8% y-o-y, imports from the Arabian Gulf down by -39.1% y-o-y, and imports from North Africa down by -39.3% y-o-y. Hence the big increase in volumes coming from the USA seems very much an outlier. The EU was the destination for 25.7% of all US seaborne crude oil exports so far this year. The other big growth area has been Mainland China, here again most likely as a result of recent trade agreements between the two countries. Seaborne crude oil exports from the USA to China surged by +257% y-o-y to 17.8 mln tonnes in the first 10 months of 2020. China was the destination of 15.0% of American oil exports so far this year. Elsewhere, exports to South Korea were down by -33.0% y-o-y to 11.1 mln tonnes, volumes to Canada were down -19.7% y-o-y to 8.9 mln tonnes, whilst volumes to India were only modestly up by +6.6% yo-y to 10.2 mln tonnes”, the shipbroker concluded. 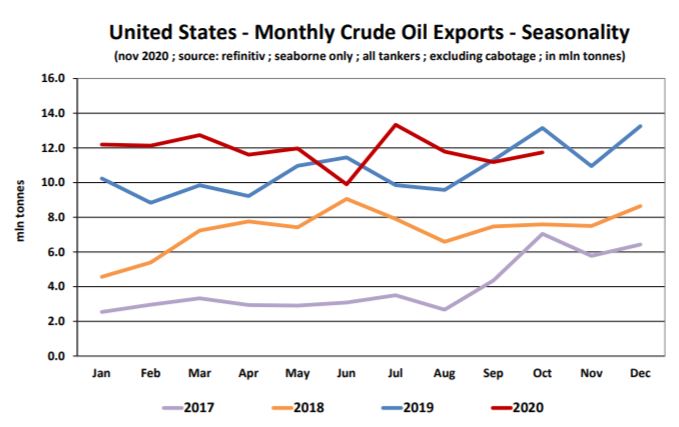 Previous: 2021 dry bulk outlook – what will happen to the global grain trade?
Next: U.S. natgas giving up on winter as widow maker spread cut to record low