Rystad Energy is creating a weekly comprehensive report calculating the effect of the novel coronavirus in our lives and updating estimates for global fuel markets.

As a result of recent developments, with travel restrictions, quarantine obligations and new government policies being announced daily around the world, we are making substantial frequent updates to most of our estimates.

In another shocking consecutive revision of our weekly estimates, our newest forecast for oil demand now projects a decrease of 4.9% for 2020, or 4.9 million barrels per day (bpd) year-on-year. Our estimates show that total oil demand in 2019 was approximately 99.9 million bpd, which is now projected to decline to 95.0 million bpd in 2020. To put the number into context, last week we projected a decrease of just 2.8 million bpd.

At the moment we expect the month of April to take the biggest hit, with demand for oil falling by nearly 16 million bpd year on year, almost a 16% drop.

This downgrade takes into account developments that happened within the course of last week such as the new quarantine lockdowns across the world, including India’s newly announced 21-day curfew. 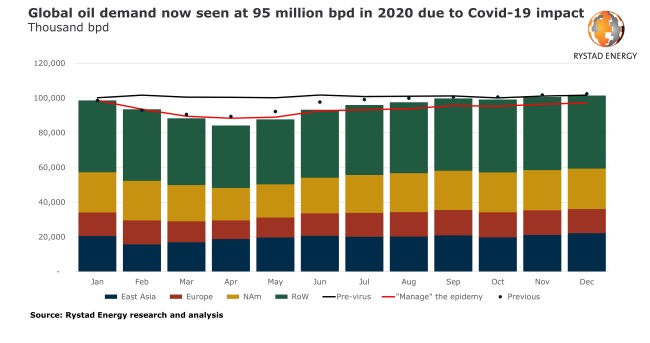 We believe that global total demand for road fuels will fall by 5.6%, or 2.8 million bpd year-on-year, a strong downgrade from last week’s report, where road fuels were expected to decline by just 2.2%.

Road fuel demand in 2019 is estimated to have reached 49.7 million bpd. Prior to the coronavirus we expected this demand segment to grow to 50.3 million bpd in 2020, but we now see it reaching only about 46.9 million bpd.

A different and possibly better way to digest the effect of COVID-19 in road fuel demand is to exclude road freight, which is little affected. Calibrating the demand this way, the adjusted road fuel demand will only amount to 45.5 million bpd this year comparing with 2019’s 47.7 million bpd.

Most of this reduction will also take effect in April, which will see its adjusted road fuel demand being limited to just 39 million bpd globally, from about 50 million bpd a year ago.

Among the various fuel sectors, we expect jet fuel to be hit the hardest. We expect global commercial air traffic will fall by at least 8% this year versus the levels seen in 2019, which we estimate stood at around 99,700 flights per day. This number includes only announced short-term cancellations and will be revised as operators continue to cut routes.

Many distressed airlines are now facing heavy cost cuts, laying-off unprecedented numbers of employees and many non-essential routes are being closed.

As a base case we now assume that the common summer air travel peak will not occur at all this year. We now see jet fuel demand falling by almost 20% year-on-year, or by at least 1.4 million bpd. Last year’s demand for jet fuel was seen at about 7.2 million bpd.

Although jet fuel demand declines by 20% we see only an 8% drop in flight traffic at present. This is due to the fact that most of the flights cut are the long-haul flights that are more fuel-intensive.

For April, the decline in jet fuel demand will average at as low as 4.1 million bpd.

The COVID-19 Report, aside from energy related projections, also includes general estimates regarding the spread and development of the pandemic globally and some of our forecasts of how it will evolve in the countries that are most affected.

Our numbers will be adjusted weekly for every new dramatic step taken by governments to slow the spread of COVID-19.
Source: Rystad Energy

2020-03-26
hellenicshippingnews.
Previous: Oil price may fall to $10 a barrel as world runs out of storage space
Next: Coronavirus: Trump and Senate agree $2tn deal to boost US economy