Crude oil inputs to Mexico’s petroleum refineries declined for the fifth consecutive year in 2018, falling to nearly 600,000 barrels per day (b/d), a 50% drop from 2013 levels. This decline in crude oil processing has coincided with a decrease in domestic production of the light crude oil that the country’s refineries are better suited to process. Mexico has increasingly relied on imports of petroleum products from the United States to satisfy domestic demand.

Petróleos Mexicanos (Pemex), Mexico’s national oil company, owns and operates the country’s six petroleum refineries, which have a combined atmospheric crude oil distillation capacity of about 1.6 million b/d. On an aggregate basis, performance at Pemex refineries has declined over the past five years after maintaining an average refinery utilization rate near or above 75% between 1990 and 2013. By 2018, the utilization rate of Mexico’s refinery network fell to less than 40%. 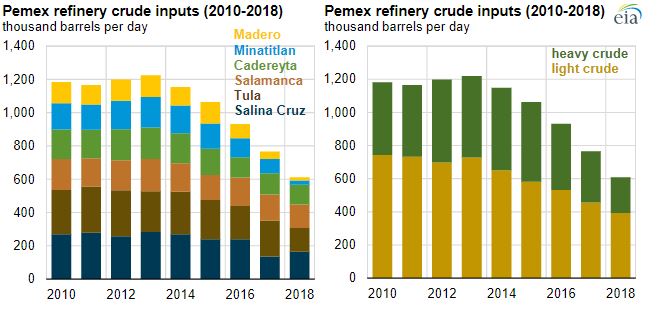 Pemex’s refineries are mostly configured to process light crude oil. Of its six refineries, three (Minatitlan, Cadereyta, Madero) are equipped with coker units to produce lower-sulfur gasoline from heavy crude oil. The 35% decrease in Mexican light crude oil production between 2013 and 2018 has resulted in limitations on crude oil refinery inputs. Inputs of light crude oil to Pemex refineries fell below 400,000 b/d in 2018, about a 50% reduction from 2013 levels.

Refineries require periodic maintenance to ensure optimal operation of processing units that refine crude oil into petroleum products such as motor gasoline and diesel. Crude oil inputs at Pemex refineries since 2014 have been further constrained by operational issues associated with the company’s refineries.

Pemex maintains control over much of Mexico’s petroleum product imports and distribution. Declines in domestic production of liquid transportation fuels have increased Mexico’s reliance on foreign sources of refined petroleum products. Pemex imports of motor gasoline increased about 230,000 b/d between 2013 and 2018, offsetting similar declines in domestic production at Pemex refineries. 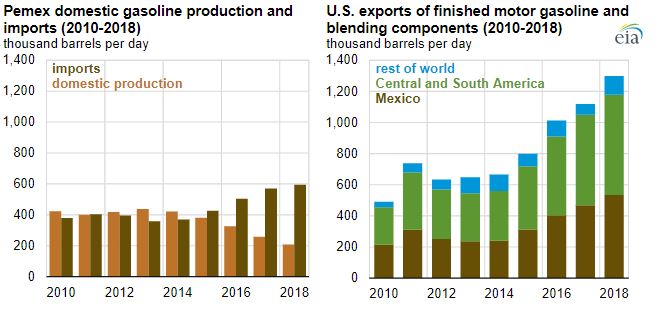 Mexican imports from the United States have helped to offset a large share of Pemex’s shortfall in motor gasoline production, supplying about 535,000 b/d in 2018, more than double the level of imports in 2013. Mexico receives the largest share of U.S. motor gasoline exports, with much of the remainder destined for Central and South American countries.

U.S. refineries along the Gulf Coast are able to process heavy Mexican crude oil blends with a high yield of finished, low-sulfur motor gasoline. Pemex currently obtains some of its motor gasoline from the United States through its joint venture with Shell at the 340,000 b/d refinery in Deer Park, Texas. The joint venture, which was recently extended through 2033, includes an agreement for Pemex to provide a share of heavy crude oil in exchange for finished petroleum products.

In September 2018, the Mexican government announced an initiative called the National Refining Plan to help Mexico achieve energy independence by 2022. The plan includes upgrades and reconfigurations at Pemex’s six refineries, as well as construction in Dos Bocas of a seventh refinery, which is designed to process 340,000 b/d of heavy crude oil. If achieved, Pemex refineries would be able to process 1.86 million b/d of crude oil to produce an estimated 781,000 b/d of motor gasoline and 560,000 b/d of diesel fuel.
Source: EIA