Oil spent another week moving sideways as traders try to work out the short-term supply and demand picture. The increasingly dangerous trade dispute between the United States and China did not help the oil market.

In the latest developments on Friday, China proposed retaliatory trade tariffs of up to 25% on $60 billion worth of U.S. goods ranging from liquefied natural gas (LNG) to some aircraft. China’s targeting of U.S. LNG and crude oil exports opens a new front in the trade war between the two countries and is weighing on oil prices.

China targeting U.S. energy exports with new duties is particularly ironic. The Trump administration had hoped to improve the U.S. trade deficit with China with exports of more American-made energy products to China.

According to the U.S. Census Bureau, China bought around $7 billion worth of American oil and gas in 2017. Secretary of Commerce Wilbur Ross earlier suggested that one way to improve trade ties would be for China to buy more U.S.-made LNG by diverting its purchases from competing countries to the U.S. This now looks like a pipe-dream.

Monthly EIA and IEA Oil Market Reports
This week, the market will get a look at the monthly oil market reports from the U.S. EIA and the energy watchdog, the IEA. First up on Tuesday is the EIA’s report for July. Traders will be watching for any changes to the agency’s U.S. oil production forecasts. In its last update, the EIA said that it forecasts U.S. crude oil production to average 10.8 million barrels per day (b/d) in 2018, up from 9.4 million b/d in 2017, and to average 11.8 million b/d in 2019.

On Friday, the IEA will publish its monthly oil market report. Traders will be most interested in the IEA’s global demand forecasts. Last month, the agency said that 1H18 growth would average 1.5 million b/d, falling to 1.3 million b/d in the second half of the year, with rising oil prices a factor. If the IEA revises down 2H18 figures, it could be food for the bears and push oil prices lower. In conjunction with the monthly oil market report, the IEA will publish its Annual Statistical Supplement – 2018 Edition.

On Tuesday, the market will get results from Pioneer Natural Resources Company (PXD) and Continental Resources, Inc. (CLR). Occidental Petroleum Corporation (OXY) reports the next day along with Energy Transfer Partners, L.P. (ETP). Cheniere Energy, Inc. (LNG) rounds out the week with financial results on Thursday.

Bulls and Bears Slug It Out
Oil put in another week of mostly sideways trading action, closing at $68.49 per barrel, just $0.20 lower than the closing price the week before. WTI opened strong last Monday with a solid push through the 21-day and 55-day exponential moving averages, but it quickly reversed on Tuesday and spent the rest of the week struggling to reach the closing price from the week earlier. 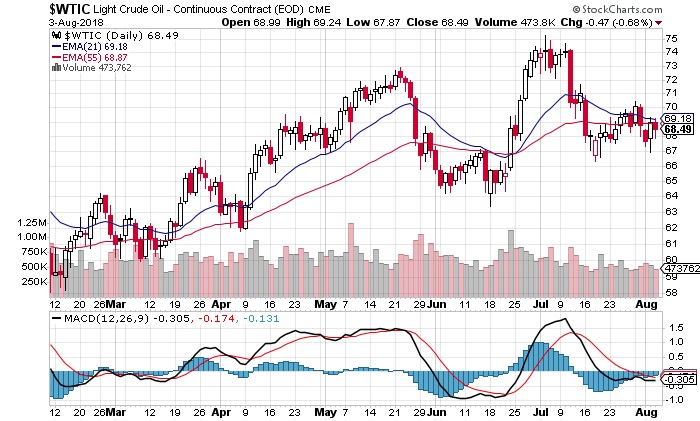 Momentum in either direction is weak. Two conflicting stories are causing the sideways trading action. The first story is that rising OPEC production and the growing U.S.-Chinese trade war will reignite a global oil surplus. The second story is that strong worldwide demand and an increasing amount of oil supply disruptions could cause global market shortages.

Oil closed Friday below both the 21-day and 55-day exponential moving averages, and the fast-line of the moving average convergence divergence (MACD) momentum indicator is spending another week firmly below the neutral zero line. MACD below zero tends to indicate that price momentum favors the bears.

2018-08-07
hellenicshippingnews..
Previous: Friendship no more: how Russian gas is a problem for Germany
Next: U.S. wants as many countries as possible to stop buying Iranian oil – senior official