April 2020 was a historic month for financial markets as oil prices traded in the negative territory for the first time ever. The demand was practically non-existent in April, which led to OPEC+ countries cutting production to its lowest levels in 30 years.
Historically low production from OPEC+ members

Crude oil prices are having a pretty bad year so far with the 2020 highs printed in the first week of January. Since then, oil prices have practically gone lower in a vertical fashion. In April, prices went below $0 for the first time ever, which was then followed by a V-shaped recovery.

As a consequence of a historic plunge in demand for the “black gold”, OPEC+ countries agreed a major cut in production levels. The latest reports show that production levels of OPEC+ members dropped by almost 2 million barrels in June. As a result, OPEC crude oil production hit its lowest point in almost 30 years.

“On the supply side, global oil production fell sharply in June to stand 13.7 million barrels per day below the April level. The compliance rate with the OPEC+ supply agreement was 108%,” it is noted in the latest report from the International Energy Agency (IEA).

“This includes overperformance by Saudi Arabia which cut production by 1 mb/d more than required, reducing OPEC crude output to its lowest point in nearly three decades. This solid performance by the OPEC+ group has been supplemented by substantial market-driven cuts, mainly in the United States”.

Crude oil prices could go north of $150, an analyst predicts

Their rationale is based on the fact that the global pandemic will lead to severe underinvestment in new oilfields. A huge pressure exercised on oil producers will cut their appetite for investments.

“Could we see oil move to $100 over the next two years? Absolutely,” says JP Morgan’s Christyan Malek.
Multiple resistance levels

If these predictions are correct, crude oil prices will have to clear numerous hurdles on its way towards $100+ levels. The first obstacle is a key bull/bear line at $42. Once this horizontal support – now resistance – was broken in March, it accelerated the trip towards $0. 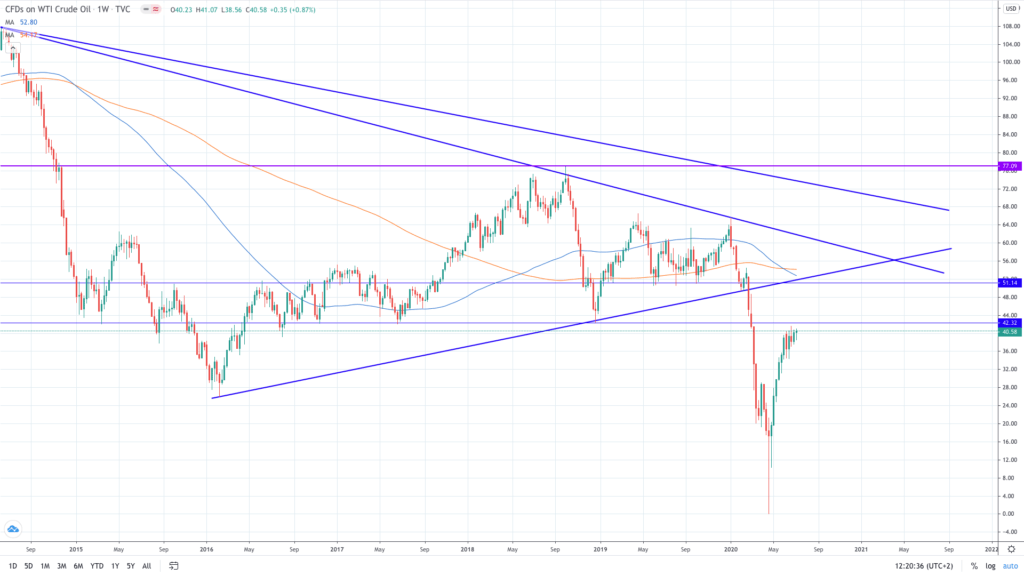 Another horizontal resistance is located just above the $50 mark. Moreover, a confluence of the 100-WMA and 200-WMA sits between $52 and $54. Ultimately, a 6-year falling trend line comes at $61.

All these levels will prove to be a tough nut to crack for the crude oil buyers if there’s fundamental support for crude oil prices to travel higher. All in all, it looks that higher volatility is here to stay.
Summary

The coronavirus outbreak has paralyzed economies around the world, which then prompted a historically low demand for oil. Still, a group of analysts believes that crude oil prices could exceed $100 a barrel on dramatic underinvestment in new oilfields.
Source: Inveez