Engaging her impressive 70 ton bollard pull, Azimuthing Stern Drive tug Fairplay-93 will be performing towage services in Port of Rotterdam from the first months of 2023 onwards. Fairplay Towage has closed a lease contract with Damen Marine Services, who is able to deliver the vessel at very short notice following the contract signing on 27 October.

The contract marks the third contract that Fairplay Towage concludes with Damen within the last 18 months, encompassing a total of four vessels. The newly built Shoalbuster 2711 with Ice class 1D notation, called Fairplay-37, was delivered to the Group on 13 October. Two RSD 2513 tugs, Fairplay-90 and Fairplay-91, are in the final stages of outfitting at Damen Song Cam Shipyard. These vessels will be delivered from the yard in January 2023. 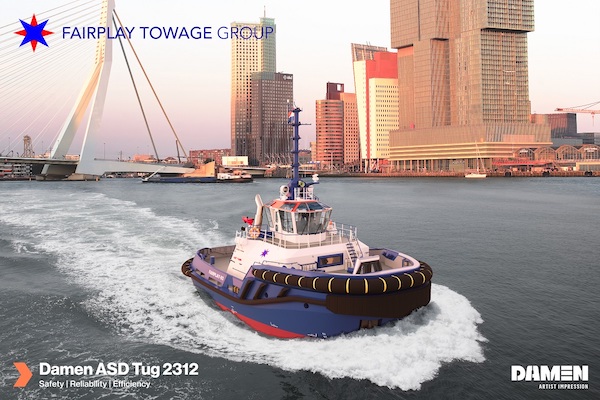 The 23 meter long vessel, with a 12 meter beam and 5.40 meter draught, is built to the Damen standardized ASD 2312 design. It was constructed at the Damen Song Cam Shipyard in Vietnam to be available for European delivery in the fourth quarter of this year. Just before her departure from Vietnam, Fairplay decided to add the vessel to their fleet. The possibility of very quick delivery of this ready-built tug enables rapid deployment in the Towage Group’s operations.

Two azimuthing stern drive propellers in nozzles each span a diameter of 2.8 meter. Power comes from two Caterpillar 3512TA engines, providing total of 5102 horsepower propulsion. Twin fins under the hull allow for side stepping as a special manoeuvre in narrow harbours. An exhaust gas after treatment system is installed to ensure the vessel’s compliance with IMO tier III emission standards. The vessel has a FiFi-1 fire extinguishing system that can spray up to 1400 cubic meters of water per hour.
Source: Damen Shipyards Group