In a ceremony held at Her Majesty’s Naval Base (HMNB) Portsmouth on 29th July, the UK’s Royal Navy ‘NavyX’ innovation team took delivery of a modified Damen Fast Crew Supplier (FCS) 4008. Named XV Patrick Blackett after a distinguished naval officer and scientist, the 42-metre, high-speed vessel will have a crew of five and will be used as a trials ship, supporting innovation and experimentation with novel technologies.

NavyX, the Royal Navy’s innovation, autonomy and lethality accelerator which has been established to rapidly develop, test and trial cutting-edge equipment, ran an open tender process which resulted in an order being placed with Damen Shipyards in the Netherlands earlier this year for the delivery of an FCS 4008.

The XV Patrick Blackett will be used as a platform for the assessment of a wide variety of equipment. Its 140 square meters of deck space provides a large, unobstructed area for UAVs, AUVs and other cutting edge technology. The extensive internal area that would normally have seating for up to 100 personnel is being converted into an operations centre and a meeting room. Four caterpillar engines will give it a top speed of more than 20 knots.

Other characteristics of the FCS 4008 that are important to NavyX include the stability and excellent seakeeping that comes with the Damen X-bow design , important when deploying equipment into the sea or air. Damen is also providing a comprehensive, three-year support package that will centre on the Service Hub that Damen set up recently in Portsmouth and which has proved to be a big success. Locally recruited personnel will maintain the vessel using local content where possible and knowledge will be transferred to ensure sustainability. 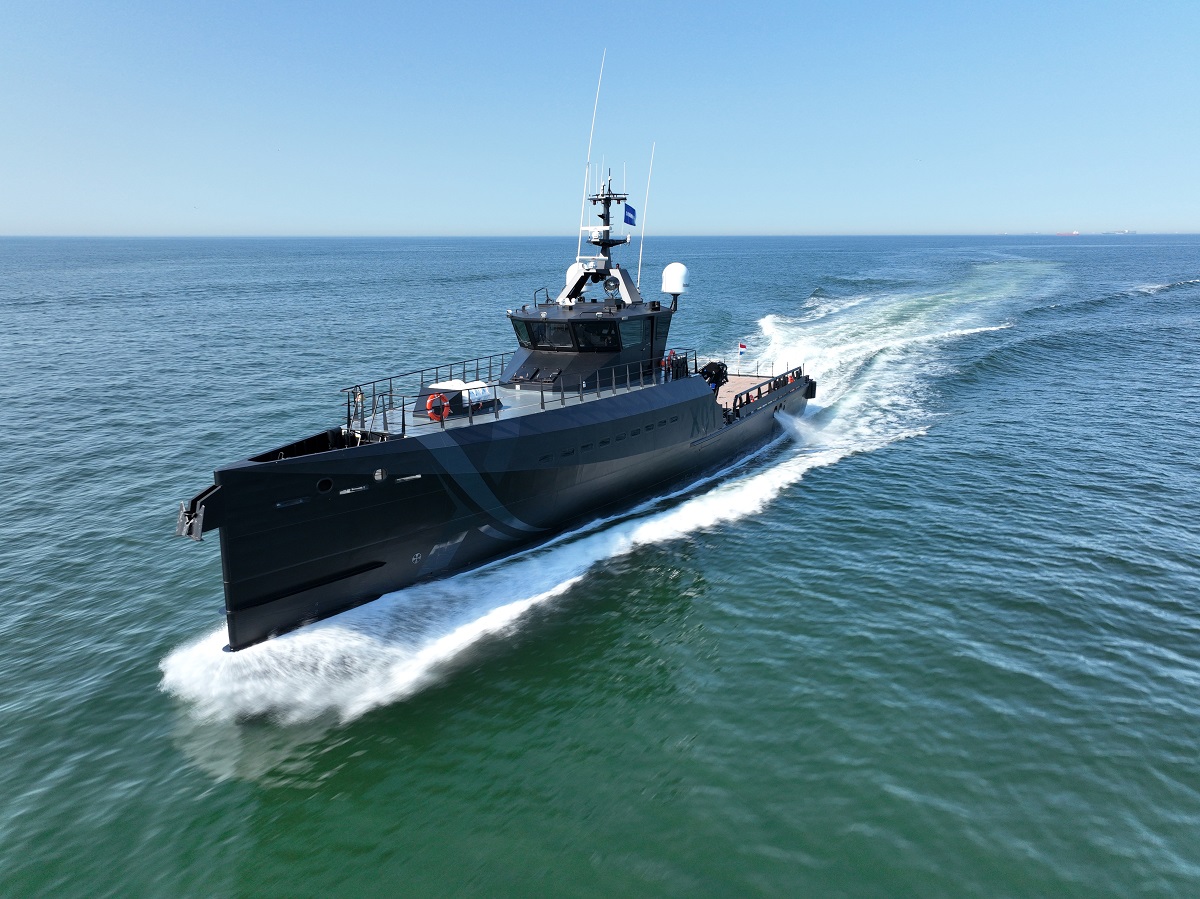 Her introduction into the fleet will enable NavyX to experiment without the need to place demands on Royal Navy warships and, in the future, she will take part in Royal Navy and NATO exercises as well as increase opportunities to work more closely with industry and academia.

“This is the first Damen vessel to be directly supplied to the Royal Navy,” says Frederik van der Linde, Damen’s sales manager for the UK and Ireland. “We are very proud that they have Damen as their partner in such a special project. As a high tech, innovative vessel, the FCS 4008 will fit in very well with NavyX’s mission to push at the boundaries of what is possible using the very latest equipment. We will also be supporting the team of NaxyX intensively via our service hub in Portsmouth where our R&D department will support certain experiments. Damen is much more than just a designer and builder of ships. This project is a testimony to how we like to team up with our clients for the long term.”

Colonel Tom Ryall, Head of NavyX, said: “The arrival of this vessel is a pivotal moment for NavyX’s ability to deliver output, and is a step change for the Royal Navy. She will give us greater flexibility to experiment with novel military capabilities, iterate and accelerate new technology, kit and concepts for the benefit of both the Royal Navy and industry.”
Source: Damen Shipyards Group